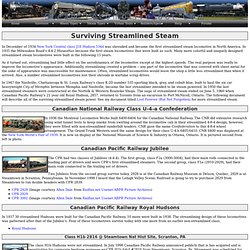 Steam Turbine Locomotives. One problem with conventional reciprocating steam locomotives is that when the horizontal motion of the pistons is converted into rotary motion of the drive wheels, the torque is not constant throughout the rotation of the wheels. 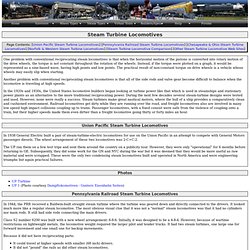 Instead, if the torque were plotted on a graph, it would be represented as a sine-based wave, having high points and low points. The practical result of non-constant torque on drive wheels is a vehicle whose wheels may easily slip when starting. Another problem with conventional reciprocating steam locomotives is that all of the side rods and valve gear become difficult to balance when the locomotive is traveling at high speeds. In the 1920s and 1930s, the United States locomotive builders began looking at turbine power like that which is used in steamships and stationary power plants as an alternative to the more traditional reciprocating power. During the next few decades several steam-turbine designs were tested and used. Photos It too was unsuccessful. The Ultimate Steam Page. Steamindex homepage. 5AT Advanced Steam Locomotive Project. Steam Locomotive Information. New Steam. SLM's greatest success was the construction of 8 new modernized rack steam locomotives 1990's in Switzerland for mountain tourist railways in Switzerland and Austria. 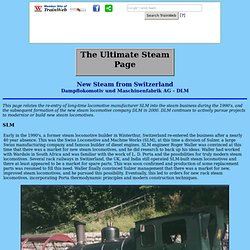 While the engines replaced locos previously built in 1891 and 1933 by SLM, they were of completely new design incorporating Porta's principles, and using modern construction techniques and technology. Featuring welded boilers, roller bearings, modern drafting arrangements, light oil firing, extensive thermal insulation, and arranged for one-man operation, they have been very successful. The boilers are so well insulated that they will maintain a head of steam overnight, allowing the engine to leave its shed under its own power in the morning and attain full working temperature and pressure in only 10 to 15 minutes after lighting the fire. An interesting innovation on these engines is the provision of an electric boiler pre-heater.

This is used to pre-heat the boilers after their monthly boiler wash to save fuel. Martyn Bane's Steam & Travel Pages. British Steam Locomotives. The steam locomotives of British Railways were used by British Railways over the period 1948–1968. 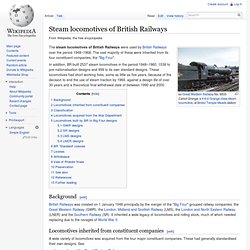 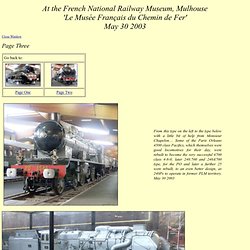 However neither a first series or the later 240P types were preserved so we have today to be content with this superb model of 240.701. On test the first batch could sustain 3030 drawbar horsepower, whilst 240P15, of the second batch, was recorded producing 3600 drawbar horsepower, with an average on the same occasion of 3190 drawbar horsepower over the 31.2km section of line. 2-8-2 141R1187 was built by US firm Baldwin in 1947 to help rehabilitate the SNCF after World War II. A very interesting exhibit is this steam powered rotary snowplough. Worldwide Steam Improvements. Kloke Locomotive Works: The Leviathan. Three Cylinder Locomotives. As far as I know, there are only five surviving 3-cylinder rod steam locomotives in the United States (this, of course, does not include all of the 3-cylinder Shay type locomotives). 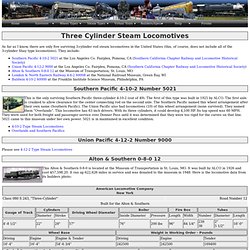 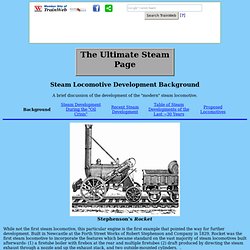 The designers of the New York Central S-1 Niagras appear to have been the exception, incorporating some suggestions from Chapelon in the steam circuit. On the other hand, Chapelon had visited the U.S. and was well aware of U.S. accomplishments.