Valve: How I Got Here, What It’s Like, and What I’m Doing 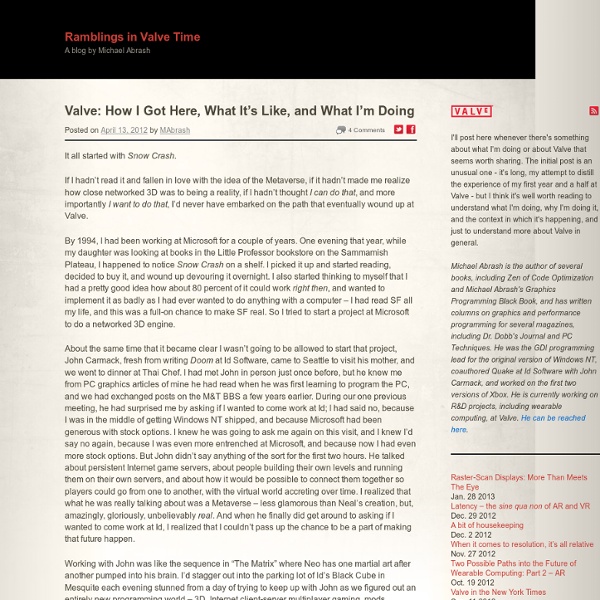 It all started with Snow Crash. If I hadn’t read it and fallen in love with the idea of the Metaverse, if it hadn’t made me realize how close networked 3D was to being a reality, if I hadn’t thought I can do that, and more importantly I want to do that, I’d never have embarked on the path that eventually wound up at Valve. By 1994, I had been working at Microsoft for a couple of years. One evening that year, while my daughter was looking at books in the Little Professor bookstore on the Sammamish Plateau, I happened to notice Snow Crash on a shelf. I picked it up and started reading, decided to buy it, and wound up devouring it overnight. I also started thinking to myself that I had a pretty good idea how about 80 percent of it could work right then, and wanted to implement it as badly as I had ever wanted to do anything with a computer – I had read SF all my life, and this was a full-on chance to make SF real. I was in for a surprise. Valve is different Valve is different. Maybe you Related:  Nieuwe werken

Game Design Aspect of the Month Valve's Culture, Self-Organization and Scrum “If you don’t like change, you’re going to like irrelevance even less.” - General Eric Shinseki In the spring of 2012 Valve's New Employee Handbook was leaked. The handbook's release has led to a number of discussions about the merit of The Cabal (what Valve calls their process) and their work environment. For me, it's hard to argue with success and everything I've read about Valve being a great place to work. Since first reading about The Cabal in 1999 and attending a few GDC sessions since, I've been inspired. Valve's handbook states this belief near the start: Hierarchy is great for maintaining predictability and repeatability. There are a number of things we wish we were better at: Helping new people find their way. This is a common challenge in any studio that is attempting to improve self-organization. Self-organization and hierarchies aren't mutually exclusive. Scrum and The Cabal have the same goals Why is it so hard then? So why do few companies ever achieve similar cultures?

www.valvesoftware.com/company/Valve_Handbook_LowRes.pdf The most interesting company in tech: Valve — Remains of the Day You hear it in technology companies all the time, especially at firms that have survived from their days as a startup to become a bigger firm: we want to remain entrepreneurial. To feel like a startup. Nimble. A place that entrepreneurs want to work. A place for builders to build (a phrase Jeff Bezos always used to describe what he wanted Amazon to be as a company). But it has always felt a bit disingenuous. [The Google 20% idea in recent history sounded like the most promising attempt, perhaps a more practical evolution of a earlier incarnations, for example research divisions like Xerox PARC or Microsoft Research] But then I read about Valve Software, and it sounded like a company was actually taking all this lip service to heart and pushing this concept to its most logical extreme. Here is the Valve Employee Handbook (PDF) which had the Internet buzzing a while back. The firm, in this view, operates outside the market; as an island within the market archipelago. A few reactions...

Inside Crytek Interview: Sascha Herfort We’re back for another round of Inside Crytek: our very own interview series which features different members of the Crytek team. First you can get up close and personal with them, and afterwards you get to ask the questions! To submit your own questions to today’s interviewee, simply post them under the link to the article on our Facebook page, GFACE, or MyCrysis. We will then forward the best and most original questions, and next week the answers will be posted online. Today’s interview features Sascha Herfort. Why did you want to work in the games industry and how did you get started? I started ‘disassembling’ games when I was about 12-years-old, and when Worldcraft came around there was no going back. Why Crytek? I’ve always loved shading and rendering and while I was studying, Crysis was released. What are the best and worst parts of your job? The best part is definitely developing cutting-edge art and technology. What are you working on at the moment?

Do What You Love A good third of the mountain of mail I’ve gotten since my first post has been of the general form: “What should I study in college/learn to do/work at to get hired at Valve/have a good career/have a good life?” The most useful response I have is drawn from my own life: Do what you love. There are no guarantees, especially in the short run, about where that will lead – but at least you’ll enjoy the trip, and it is likely to lead to exciting things. It is true, however, that it can take a while; consider my own long journey to being a full-time programmer. In 1975, I was a freshman at Clark University with absolutely no idea what I wanted to do with my life. Dick had the habit of writing each homework assignment on the blackboard (this was before whiteboards) at the start of the class that covered the relevant material for that assignment. That summer, I decided to stay on campus, so I had to take a class. That was just the start for me and the VIP, though.

Welcome to the Bossless Company Exclusive: Valve said to be working on 'Steam Box' gaming console with partners, could announce at GDC Recently there's been chatter that Valve — the company behind the massively popular gaming service Steam — has been considering getting into the hardware business. Specifically, there have been rumors that the company has been toying with the idea of creating a proper set-top console which could potentially pose a threat to the Xbox 360 and PlayStation 3. Valve co-founder Gabe Newell even recently told Penny Arcade: "Well, if we have to sell hardware we will." At a glance that would simply be interesting fodder for a gaming forum debate, but we've uncovered information that suggests that not only has Valve been secretly working on gaming hardware for the living room, but that the company is actively pursuing a strategy which would place Steam at the center of an open gaming universe that mirrors what Google has done with Android. That jibes pretty well with this rumored arrangement. The most interesting piece of this puzzle may be related to that statement.

Warhorse studios: BLOG Filed in Developers' diary by Dan @ 6:43 pm UTC Apr 1, 2014 It's over a month since our campaign ended and we’ve been keeping a bit quiet. Everyone is probably curious what we’re up to now. So here I am to tell you what our plans are for the upcoming months. Time to store all those Kickstarter money (GDC Humble Bundle Party was taking place in the San Francisco Old Mint). I’ll start with what we did last month. 17 Comments Filed in Developers' diary by Dan @ 5:19 pm UTC Nov 21, 2013 Our pitching tour over, we went back to work. If you, like our colleagues, were expecting our phones to start ringing off the hook one day after our return, swarming us with promises of millions of dollars, then you were expecting incorrectly. One of the biggest blows was being turned down by a very promising, international publishing company. 54 Comments Me and an unnamed publisher. Last time we left off just at the point when we were embarking on a pitching tour of publishers to try and push our game on them.

Gabe Newell on what makes Valve tick Valve co-founder and CEO Gabe Newell (Andrea Peterson/Washington Post) Valve is one of the most successful video game companies in the world. The firm's online game distribution and multi-player platform Steam has 65 million users. At next week's CES conference, the company will announce hardware partners for one of its most ambitious undertakings so far: a line of gaming console alternatives running on the company's linux-based Steam OS. What makes Valve so successful? Andrea Peterson: Can you tell me about the company and why it works why it works the way it does? Gabe Newell: The company grew out of trying to think about how to design for the specific business challenges we would have. Also, it was pretty clear that there were very large differences in productivity between people who were good and people who were great. For people that started off here they sort of get used to how it works, but it's sometimes a bit of a culture shock when people are coming in from other industries.