Researchers Gave Robots the Ability to Think Ahead. Thinking Ahead Humans have the ability to think about their action before they act. 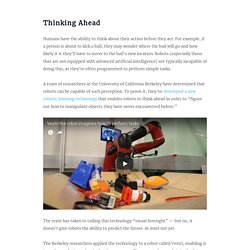 New App for Depression Lies Somewhere Between a Game and a Real Therapist. Dark Future: Here's When We'll Have the Autonomous Guard Dogs from Black Mirror. This article is part of a series about season four of Black Mirror, in which Futurism considers the technology pivotal to each episode and evaluates how close we are to having it. 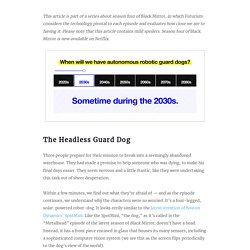 Please note that this article contains mild spoilers. Season four of Black Mirror is now available on Netflix. The Headless Guard Dog Three people prepare for their mission to break into a seemingly abandoned warehouse. They had made a promise to help someone who was dying, to make his final days easier. Within a few minutes, we find out what they’re afraid of — and as the episode continues, we understand why the characters were so worried. Unlike the SpotMini, however, the metalhead dog comes with a whole bunch of advanced weaponry — a grenade that launches shrapnel-like tracking devices into the flesh of prospective thieves or assailants, for example. Future Robots May be Considered "Electronic Persons" Science fiction likes to depict robots as autonomous machines, capable of making their own decisions and often expressing their own personalities. 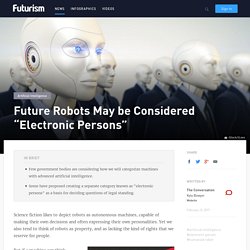 Yet we also tend to think of robots as property, and as lacking the kind of rights that we reserve for people. But if a machine can think, decide and act on its own volition, if it can be harmed or held responsible for its actions, should we stop treating it like property and start treating it more like a person with rights? What if a robot achieves true self-awareness? Should it have equal rights with us and the same protection under the law, or at least something similar?

These are some of the issues being discussed by the European Parliament’s Committee on Legal Affairs. Of the legal solutions proposed, perhaps most interesting was the suggestion of creating a legal status of “electronic persons” for the most sophisticated robots. Engineers Have Made A Robot That's Controlled by Brainwaves. In Brief There are over 18 million people who suffer from mobility issues in the United States and CanadaDisabled adults could use "Teleport" to work full-time without being hindered by their physical limitations A highly decorated young engineer, Marita Cheng, has developed an ingenious, easy to use robot that can help the disabled gain enhanced mobility. 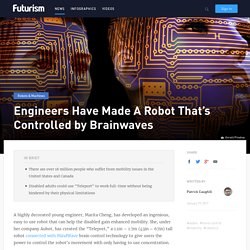 This Is What Robots Will Be Doing in 2025. As Silicon Valley continues to aggressively push the technological envelope – tinkering with self-driving cars, delivery drones and intelligent digital agents – the separation between 'human' jobs 'robotic' ones is getting blurry. 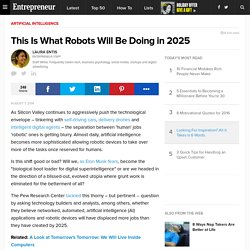 Almost daily, artificial intelligence becomes more sophisticated allowing robotic devices to take over more of the tasks once reserved for humans. Is this shift good or bad? Will we, as Elon Musk fears, become the "biological boot loader for digital superintelligence" or are we headed in the direction of a blissed-out, evolved utopia where grunt work is eliminated for the betterment of all? The Pew Research Center tackled this thorny – but pertinent -- question by asking technology builders and analysts, among others, whether they believe networked, automated, artificial intelligence (AI) applications and robotic devices will have displaced more jobs than they have created by 2025. Silicon Valley High-Tech Firms Get Five Foot Tall Robot Guards. Scientists teach machines to learn like humans. A team of scientists has developed an algorithm that captures our learning abilities, enabling computers to recognize and draw simple visual concepts that are mostly indistinguishable from those created by humans. 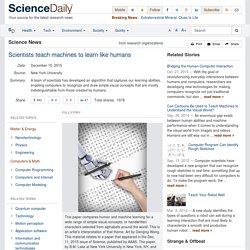 The work, which appears in the latest issue of the journal Science, marks a significant advance in the field -- one that dramatically shortens the time it takes computers to 'learn' new concepts and broadens their application to more creative tasks. "Our results show that by reverse engineering how people think about a problem, we can develop better algorithms," explains Brenden Lake, a Moore-Sloan Data Science Fellow at New York University and the paper's lead author. Roboticists learn to teach robots from babies. Babies learn about the world by exploring how their bodies move in space, grabbing toys, pushing things off tables and by watching and imitating what adults are doing. 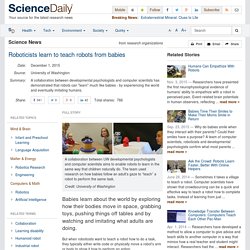 But when roboticists want to teach a robot how to do a task, they typically either write code or physically move a robot's arm or body to show it how to perform an action. Now a collaboration between University of Washington developmental psychologists and computer scientists has demonstrated that robots can "learn" much like kids -- by amassing data through exploration, watching a human perform a task and determining how best to carry out that task on its own.

"You can look at this as a first step in building robots that can learn from humans in the same way that infants learn from humans," said senior author Rajesh Rao, a UW professor of computer science and engineering. "Babies engage in what looks like mindless play, but this enables future learning. IBM sticks Watson's brain into a friendly virtual assistant. 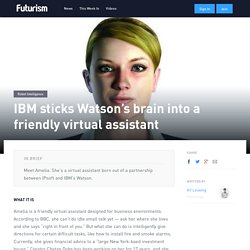 8 industries robots will completely transform by 2025. Kim Kyung Hoon/ReutersRobot HRP-2 demonstrates use of a tap after washing a cup at Tokyo University Just as ATMs changed banking and computers took over the home and workplace, robots and artificial intelligence are going to transform a bunch of industries over the next decade. 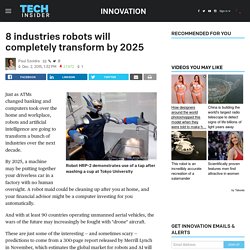 By 2025, a machine may be putting together your driverless car in a factory with no human oversight. A robot maid could be cleaning up after you at home, and your financial advisor might be a computer investing for you automatically. And with at least 90 countries operating unmanned aerial vehicles, the wars of the future may increasingly be fought with "drone" aircraft. Robots Won't Own You. You'll Own the Robot. The robots are not taking our jobs. 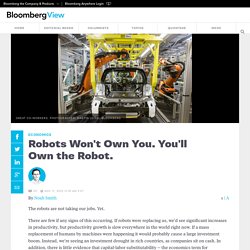 Yet. There are few if any signs of this occurring. Welcome to Robotics Business Review. Robotics Trends. RoboBusiness. The Rise of Robotics. Robotic applications have evolved over time. Historically, robots were used in manufacturing largely for repetitive tasks that require speed, strength, and moderate precision, such as material handling and processing, welding and soldering, and assembly. With their growing computing power and the development of miniature precision sensors, robots are moving from making cars to driving them. As they become more affordable and application programming becomes easier with more sophisticated user interfaces, robots are making small-batch production economically more feasible, because line changeovers are much faster. Given that product life cycles are getting shorter and just-in-time manufacturing helps minimize the need for inventory, robotic flexibility and responsiveness are important benefits.

The Robots Are Winning! by Daniel Mendelsohn. Her a film directed by Spike Jonze Ex Machina a film directed by Alex Garland We have been dreaming of robots since Homer. In Book 18 of the Iliad, Achilles’ mother, the nymph Thetis, wants to order a new suit of armor for her son, and so she pays a visit to the Olympian atelier of the blacksmith-god Hephaestus, whom she finds hard at work on a series of automata: Microsoft “Project Premonition” Can Prevent Epidemics Before They Happen. This new project by Microsoft will employ drones to conduct genetic tests on mosquitos, analyzing infectious strands and producing vaccines before any disease outbreak can occur.

Malaria: the Secret Killer As a widespread disease that is transmitted by mosquitoes, malaria affects over 500 million people annually. Over one million people die each year from mosquito-borne diseases. In fact, for every war that America fought in the 20th century, malaria killed more people than the gunfire did. Microsoft saw it fit to put a stopper on these fatal insects.

Drones in the Bug Battlefield. Unmanned Ship Expected to Make Cross-Atlantic Voyage in 2020. In Brief Plymouth University in the United Kingdom revealed plans to build a "full-sized" autonomous unmanned ship. The ship will replicate the Mayflower journey across the Atlantic in 2020. Plymouth University is calling the project Mayflower Autonomous Research Ship, or MARS. Plymouth company MSubs will lead the project’s construction, but there’s potential regulatory issues with bodies such as the UK Maritime and Coastguard Agency.The ship will be designed by Shuttleworth Design, and early renders show it has two outriggers. The researchers plan to try out new navigation software as well as alternative forms of power, including wind.The researchers believe this project has the “potential to transform and influence the future of world shipping.” Autonomous Reproduction: Evolving Robots Are Here. A study by the University of Cambridge examined the "evolution" of robots, where a mother robot created increasingly successful offspring based on natural selection.

A mother robot designs and builds her own children, with each generation better suited to the environment than the last. By the final round, she has produced a generation that is over twice as fit as the first. The experiment, conducted by researchers at the University of Cambridge, aimed to test the customization and evolution potential capable by robots. “We think of robots as performing repetitive tasks, and they’re typically designed for mass production instead of mass customization,”says lead researcher Dr. Fumiya Iida. In their experiment, a mother robot built her own children and allowed them to run, using the total distance traveled in a certain amount of time as an indicator of fitness. Should humans be able to marry robots? Centre for Robotics and Neural Systems (CRNS) Centre for Robotics and Neural Systems. The Day You’ll Prefer Robots to Humans. Finally, the robot revolution is arriving. Do Robots Rule the Galaxy?

Google patents customisable robot personalities. Do you like your robots subservient and complimentary, or glib and a little bit cheeky? The Personality Forge AI - About Artificial Intelligence Chat Bots. Welcome to the Personality Forge, an advanced artificial intelligence chat bot platform and living community of chat bots and people. Unfair Advantages of Emotional Computing. Unfair Advantages of Emotional Computing. Falling in love with AI virtual assistants: a creepy love affair nearer than you think.