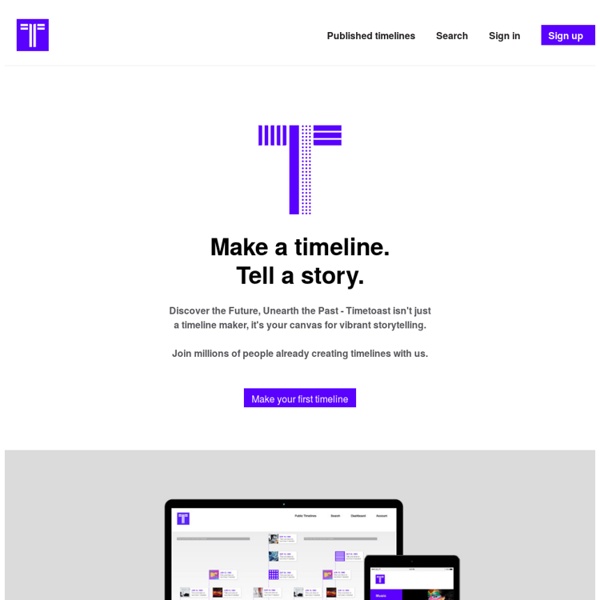 Free Flash Animation Tool – Vectorian Giotto Features We created Giotto for designers, not coders Giotto is the free Flash animation package made for you to design, not to code. With Giotto you can relax and focus your imagination on creative concepts, integrating stunning graphics and music into masterpieces of design. The latest versions of Adobe® Flash® are moving away from designers. They are becoming more and more oriented towards coders. 20 useful ways to use Padlet in class now Padlet is a web app that lets users post notes on a digital wall. The uses for this site in the classroom are virtually endless! There’s a good chance you’ve done the “write on a sticky note and put it on the wall” activity — or have seen it happen before. Padlet lets those sticky notes have images, links and videos AND be available with practically any Internet-ready device.

Native American History Timeline of Important Dates How It All Went Down Sep 3, 1783 Treaty of Paris The Treaty of Paris, formally ending the American Revolution, is signed by representatives of Great Britain and the United States. In the treaty, the British cede all of their North American territories south of Canada and east of the Mississippi River to the United States. Former agreements between the British and the Indian occupants of these territories are implicitly voided.

PowerPoint Jeopardy Templates Downloads, Educational PowerPoint Information Why should I use PowerPoint in my Classroom Today's students need a diversity of experiences in the classroom. PowerPoint activities used in moderation can help provide that diversity. When teachers first started using PowerPoint in the classroom, some of them went overboard and used PowerPoint as part of every lecture or every activity on a daily basis. Using classroom PowerPoints in this way can lead to student boredom. Teachers need to look at PowerPoint as more than digital "lecture notes" and instead look at new ways they can use this classroom technology to enhance student learning.

The 18 best tools for online collaboration Individuals in design teams don't always work together in the same office. You may be positioned in distributed groups, or working from home, and clients can come from all over the world. This is where collaboration tools come in – they make it easier and faster for designers to get feedback and approve artwork in a professional manner, and they come in all sort of forms, from free Android apps to Chrome extensions. Here we gather together some of the best available online tools to allow designers to collaborate together in real time. Some are created specifically for designers, some serve as a concept crafting whiteboard, and we've also included some more full-on project management tools for when you need to take your collaborative project to the next level. 01.

About XBMC is an award-winning free and open source (GPL) software media player and entertainment hub that can be installed on Linux, OSX, Windows, iOS, and Android, featuring a 10-foot user interface for use with televisions and remote controls. It allows users to play and view most videos, music, podcasts, and other digital media files from local and network storage media and the internet. Our forums and Wiki are bursting with knowledge and help for the new user right up to the application developer. We also have helpful Facebook, Google+, Reddit, Twitter and Youtube pages.

20+ resources for engaging game-based learning Bringing aspects of games into the classroom can be highly motivational and engaging, making content stick. Here are some resources. (Public domain image via Pixabay.com) The hard lives — and high suicide rate — of Native American children on reservations SACATON, ARIZ. The tamarisk tree down the dirt road from Tyler Owens’s house is the one where the teenage girl who lived across the road hanged herself. Don’t climb it, don’t touch it, admonished Owens’s grandmother when Tyler, now 18, was younger. There are other taboo markers around the Gila River Indian reservation — eight young people committed suicide here over the course of a single year. “We’re not really open to conversation about suicide,” Owens said.

Photos for Class: Kid Safe Search Image Search for Schools Kid safe search is a great tool for the classroom, especially if you’ve ever struggled leading students through a Google Image Search. Teachers will appreciate Photos for Class, a kid safe image search for schools. This kid-friendly image search engine brings age-appropriate images to your students’ fingertips. Photos for Class is a free search engine that helps students find Creative Commons licensed pictures. Each picture includes an automatic citation when photos are downloaded. This kid-friendly image search engine includes pictures from Flickr, The Library of Congress, and the British Royal Archives. 50 Free Animation Tools And Resources For Digital Learners 50 Animation Tools & Resources For Digital Learners by Lisa Chesser, opencolleges.edu.au A purple monster with wild curls spiraling out of control explains the economics of oil production in the Sudan to students in Los Angeles, Sydney, Berlin, Jerusalem, and Riyadh. That is education and animation working together to teach students everywhere, everything they ever wanted to know. Educators need only utilize the tools available, most of them for free.

Absolutely! Great ideas! I first heard of it in a writing class. The assignment was to create a literacy timeline of our lives from childhood to the present..it's not great, but here is my example if you are looking for another lesson to use with timetoast: by mburright Dec 1

I think this is a good tool to think about sequencing--especially if you ask kids to search for things like--most important inventions for communication, medical science. It helps them create a sequence and a sense of time and history. by converge Dec 1