THE ART CENTER / Sharing Ideas And Tips From Artist To Artist 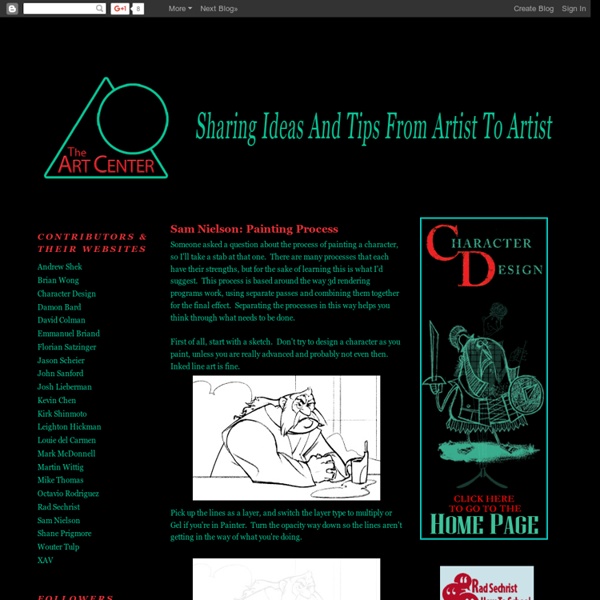 Someone asked a question about the process of painting a character, so I'll take a stab at that one. There are many processes that each have their strengths, but for the sake of learning this is what I'd suggest. This process is based around the way 3d rendering programs work, using separate passes and combining them together for the final effect. First of all, start with a sketch. Pick up the lines as a layer, and switch the layer type to multiply or Gel if you're in Painter. These next steps can almost be done in any order. On a separate layer, paint the occlusion in. Now, on a new layer, paint in a single light source. Here is what the lighting layer and the occlusion layer look like when they're both visible on a blank background. Here's what those layers look like applied over the colors I painted earlier: If you want any more lights in the scene, use a "Screen" layer, which acts as a true additive layer.

Shows - The "Here Comes Honey Boo Boo" Scandal: Mama June Speaks Out Earlier this year, 9-year-old former child pageant star Alana “Honey Boo Boo” Thompson saw her four-year reality television reign come to an end after reports surfaced that her mother, June “Mama June” Shannon, was allegedly dating convicted sex offender Mark McDaniel — who pleaded guilty to molesting Mama June’s oldest daughter, 20-year-old Anna, who recently publicly confirmed that she was his victim. Mama June denies being romantically involved with McDaniel, who was released from prison in March 2014 after serving a 10-year sentence for aggravated child molestation. In a daytime television exclusive, Dr. Plus, Anna reportedly claims that Mama June depleted her trust fund and used some of the money to buy McDaniel a new car — how does Mama June respond? This program contains strong language and adult subject matter. Tune in tomorrow, when Dr. More than 16 million kids in the United States are at risk for hunger each day. Mama June answers Dr. Dr. Plus, don’t miss Dr.

The Art of DAVID ADHINARYA LOJAYA: How to Paint Ambient Occlusion for Digital Painting Newest Update: I made a new video tutorial about How to Paint Ambient Occlusion for Digital Painting. You can download it here: Ambient Occlusion Tutorial It's affordable and very cheap! ;) Hey guys! Why Ambient Occlusion or AO painting? 1. I sketch it in photoshop. 2. So, I started with blocking the character with light grey color, and in that light grey, I painted the shadow. 3. Okay, here is the tricky part. Make your painting looks almost like a 3d sculpt in this process. 4. So, when you satisfied with your shadow and AO layers, you may proceed to the next level which is awesome. 5. Actually this process could be done before you start the shadowing. 6. As you see, the painting would looks flat, so you should add more color temperature on each of your colors. 7. Here is the final Image. 8. This method is fun and really technical. You can ask me anything about this tutorial, I'll gladly answer it :)

'Annabelle Forest' was forced to sleep with 1,800 men by age 18 in Satanic sex cult The daughter of a woman involved in a Satanic sex cult has revealed her evil mother made her sleep with 1,800 men by the time she was 18. The woman, who has called herself Annabelle Forest, was initiated into the sick cult after having to watch her mother perform a sex act on the cult's ringleader Colin Batley at the age of seven. At 11 she was raped twice by the man, and three years later made to take part in group sex with her mother at their home near Llanelli in Wales, where at least two other households on the street took part in cult activity. Jacqueline Marling (left) and Colin Batley (right) systemically sexually abused the girl throughout her childhood. The sick neighbours were jailed in 2011 for their roles in a satanic sex cult in Wales Colin Batley and Jacqueline Marling were jailed for systemically sexually abusing the girl as she was growing up. Snakes would be kept near an 'altar' in his lounge where residents on the quiet cul-de-sac would congregate on Sunday evenings.

Copic Marker Tutorial I by cartoongirl7 on DeviantArt my cat Kyle High Res Now for sale in our store! The bandana… not the cat. ;) High Res Attention!!! 📢📢📢 We are excited to announce the #grandopening of the #CharitableCash4KylesStache online store (mycatkyle.storenvy.com)!!! 🎉🎉🎉 Yesterday’s launch date coincided with the start of #NOMOREweek - @nomoreorg’s March #DVawareness campaign. 💜 I’d like to thank everyone who participated in the amazing success of our Indiegogo campaign! 💜 We are also SUPER excited to announce a **special twist** to our online store! High Res I just want to share this again.

Terra - Process by tsuaii on DeviantArt WoW Herbalism Guide 1-600 | Herbalism Leveling Guide This Herbalism leveling guide will show you the fastest way how to level your Herbalism profession from 1 to 800. Updated for Legion patch 7.0.3 The guide includes routes for the best zones filled with herbs. Herbalism goes well with Alchemy, you can use the herbs you pick and make potions, but Herbalism is good with any other profession. If you want to level Alchemy, check out my Alchemy Leveling Guide. If you are low on gold, I recommend you to try this Gold Making Guide, it can help you to make loads of gold. If you are still leveling your character or you just started a new alt, I recommend you to use a leveling guide. Guide Sections: Apprentice 1 - 70Journeyman 70 - 125 Expert 125 - 180Artisan 180 - 275 Master 275 - 325 Grand Master 325 - 425 Illustrious 425 - 500 Zen 500 - 600 Draenor 600 - 700 Legion 1 - 800 Herbalism Leveling Guide 1 - 70 If your character is already level 100, jump to the Legon section. You can now pick herbs without a required skill. Tirisfal Glades Elwynn Forest

Gouache Painting Tips A few of you asked about gouache painting tips, so this one is for you guys! All you really need to get started with gouache is paint, brushes, a palette, water, and something to paint on (I used bristol paper). It turns out that I’ll need a bit more experience before I become the Queen of Gouache, but I did have a few helpful epiphanies while I practiced. Epiphany #1: Don’t buy cheap gouache. gouache paint. Epiphany #2: Experiment with different brushes. Epiphany #3: When mixing paint, use white paint to lighten the color instead of water. Epiphany #4: Don’t mix in much water. Happy gouache-ing!

48 Epic Dream Hotels to See Before You Die