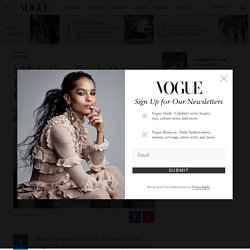 The British-born musician is notably as bold in her interviews as she is in her music—which makes her perhaps the most refreshing ambassador H&M could have tapped to be the face of its World Recycle Week initiative. When it comes to the world of corporate-helmed “green” moves, conversation all too often turns predictably vague, glossing over the heart of the matter in favor of feel-good buzzwords. And while H&M, as a mass-market retailer on a global scale, has faced its fair share of criticism for things like its annual sustainability reports and Conscious Exclusive Collection, M.I.A. sees it through a distinctly different lens. Riverbank Energy Turbines : turbine generator. 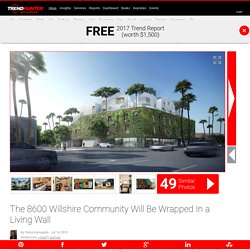 Designed by MAD Architects, this community will "coalesce nature and community into a living environment among high-density cities. " The community will comprise 18 residential units including three townhouses, five villas, two studios and eight condos. Each of the properties will overlook the street on one side but will offer privacy on the other side by means of an enclosed garden. An elevated courtyard will feature plants and a tree canopy. Tree-Embedded Cube Structures : plane-tree-cube nagold. Tree-Embedded Cube Structures : plane-tree-cube nagold. Sustainable Paper Accessories : washed Kraft paper. Plastic Bottle Christmas Trees : fake Christmas tree. Biodegradable food packaging market to reach US$7,058.8m.

Biodegradable food packaging market to reach US$7,058.8m According to a new market report published by Credence Research “Biodegradable Food Packaging Market – Growth, Future Prospects, Competitive Analysis, and Forecast 2016 – 2023,” the biodegradable food packaging market has been estimated to be valued at US$ 3,403.4 million by the end of 2016, and is expected to reach US$ 7,058.8 million by 2023, expanding at a CAGR of 11.0% from 2016 to 2023. 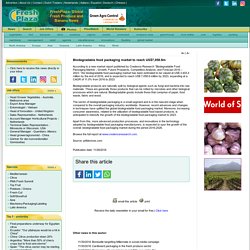 Biodegradable products are naturally split by biological agents such as fungi and bacteria into raw materials. These are generally those products that can be rotted by microbes and other biological processes which are natural. Biodegradable goods include those that comprise of paper, food waste, fabric and wood. Cleaning up the Pacific Garbage Patch: Dutch foundation tests new system off coast of Holland - Yachting World.

Whatever the truth about rubbish in the bay off Rio de Janeiro, this summer's Olympic sailing highlighted the problem of maritime pollution. 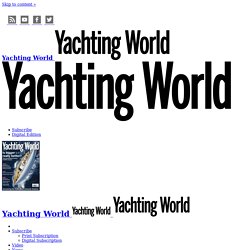 Now a Dutch foundation has a solution. During the build-up to this summer’s Olympic regatta in Rio, water quality and in particular the fear of debris and pollution affecting racing outcomes and racers’ health, hit the headlines. But there was little said by those most affected – the competitors. In Qingdao in 2008, the course was so thick with weed you felt you could almost walk across the bay.

The massive problem of microplastics. Feature As plastics fill up and pollute our oceans, recognising their value rather than thinking of them as disposable could help us deal with what has turned into a large, global problem. 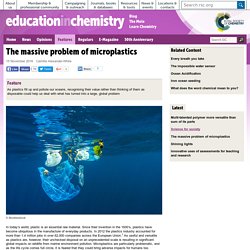 COP22: Four nations map course to carbon-free economies - Times of India. MARRAKESH: When it comes to purging fossil fuels from the global economy by mid-century -- our only hope of staving off catastrophic climate change -- it turns out that you can't get there from here without a good map. 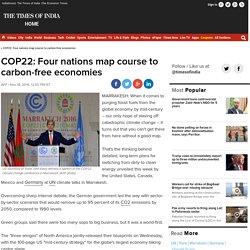 That's the thinking behind detailed, long-term plans for switching from dirty to clean energy unveiled this week by the United States, Canada, Mexico and Germany at UN climate talks in Marrakesh. Overcoming sharp internal debate, the German government led the way with sector-by-sector scenarios that would remove up to 95 percent of its CO2 emissions by 2050, compared to 1990 levels. From Copenhagen to Singapore: A walking journey. German philosopher Friedrich Nietzsche once said: “All truly great thoughts are conceived while walking.” 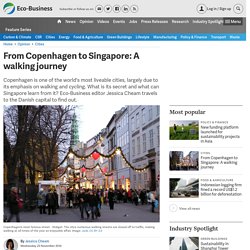 This might help explain why as a country, Denmark is consistently ranked highly in global indices on education, health care, social mobility and human development. Its capital Copenhagen is considered one of the most liveable cities in the world, and experts often attribute this to its people-centric urban planning which promotes cycling and walking above all else. In 2013, non-profit organisation Walk21 declared Copenhagen the most walkable city in the world. Copenhagen - Carbon Neutral by 2025.

Adidas ocean waste shoes now available to buy - INSIDER. Adidas For a while, Adidas and Parley for the Oceans, an organization dedicated to reducing plastic waste in oceans, have collaborated on shoes made of recycled plastic from oceans. 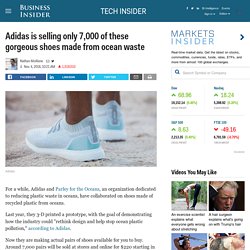 Last year, they 3-D printed a prototype, with the goal of demonstrating how the industry could "rethink design and help stop ocean plastic pollution," according to Adidas. Now they are making actual pairs of shoes available for you to buy. Around 7,000 pairs will be sold at stores and online for $220 starting in mid-November. The shoe has an "upper" made of 95% ocean plastic — scooped up near the Maldives — and the rest of the shoe is made from largely recycled materials as well. Adidas ocean waste shoes now available to buy - INSIDER. 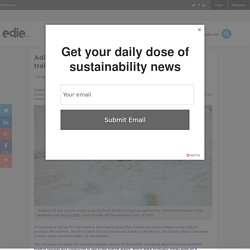 Adidas will use marine waste sourced from Parley’s clean-up operations, which are located in the Maldives and along 1,000 coral islands off the western coast of India According to Parley for the Oceans, the organisation that Adidas has been collaborating with to produce the trainers, the first batch of mass-produced Adidas x Parley for the Oceans Boost Uncaged trainers were unveiled today (15 November). The company unveiled the commercialised version of the trainer alongside Bayern Munich and Real Madrid football kits consisting of upcycled marine waste, which were originally showcased on 4 November. 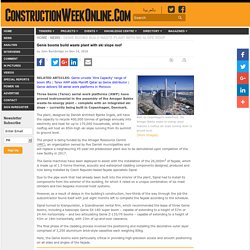 [More Images] RELATED ARTICLES: Genie unveils ‘Xtra Capacity’ range of boom lifts | Terex AWP adds Manlift Qatar as Genie distributor | Genie delivers 58 aerial work platforms in Morocco Three Genie (Terex) aerial work platforms (AWP) have proved instrumental in the assembly of the Amager Bakke waste-to-energy plant – complete with an integrated ski slope – currently being built in Copenhagen, Denmark. The plant, designed by Danish architect Bjarke Ingels, will have the capacity to recycle 400,000 tonnes of garbage annually into electricity and heat for up to 170,000 households, while its rooftop will host an 85m-high ski slope running from its summit to ground level. The world's weirdest ski slopes, from a power plant in Copenhagen to a Hawaiian mountain. Everyone knows there's good snow at big ski areas like Whistler and the Swiss Alps. Copenhagen to Build Ski Slope Atop New Power Plant.

Copenhagen, Denmark – When Copenhagen’s new waste-to-energy plant opens next year, the city’s residents will have a new ski run to sample, too. The new Copenhill / Amager Bakke power plant currently under construction will not only be one of Europe’s most energy-efficient, environmentally friendly and highest capacity waste-to-energy plants, but also it’s most visually attractive and publicly acceptable, according to builder Babcock & Wilcox Vølund.

New artificial ski slope to open on roof of Copenhagen green power plant. Ski slope to open on new Copenhagen power plant. Denmark may be famous for many innovations – Lego, hygge, Noma restaurant – but skiing is not one of the things that springs to mind when you think of this fairly flat and not particularly snowy country. There is one short natural slope – at Roskilde, west of Copenhagen – that sometimes has enough snow for skiing – but from next year locals and visitors will be able to get their downhill kicks closer to the capital. The unlikely location for a new year-round ski track is the sloping roof of a state-of-the-art green power plant. When planning to build the Amager Bakke waste-to-power incinerator plant, as part of an aim to become the world’s first zero-carbon city by 2025, the Danes decided to move away from the usual monolithic, industrial look.

NASA Already Says 2016 Will Be the Hottest Year on Record. 2016 Set to Become Hottest Year on Record. 2016 is set to be the hottest year on record by a significant margin, with temperatures that are 2.2˚F (1.2˚C) above pre-industrial times, the World Meteorological Organization told diplomats gathered in Marrakech, Morocco, to discuss international action to limit global warming to less than 2˚C by the end of the century. The year-to-date temperature anomaly using the 1891-1910 baseline. “Another year. Another record. 2016 Climate Trends Continue to Break Records. Operation IceBridge, NASA’s airborne survey of changes in polar ice, is closing in on the end of its eighth consecutive Antarctic deployment, and will likely tie its 2012 campaign record for the most research flights carried out during a single Antarctic season.

“We are probing the most remote corners of Spaceship Earth to learn more about changes that affect all of us locally, such as how ice sheets are contributing to sea level rise,” said NASA Deputy Administrator Dava Newman on her very first flight over Antarctica with the IceBridge team on Nov. 17. “At NASA we explore: not only space, but also our home planet.” Flying low over the Earth’s southernmost continent, Operation IceBridge is wrapping up its eighth consecutive field season of mapping the ice sheet and glaciers of Antarctica, as well as the surrounding sea ice. With more than 300 hours logged in the air over 24 science flights, the mission is considering 2016 one of the most successful seasons yet. 2016 will be the hottest year on record, UN says. 2016 will very likely be the hottest year on record and a new high for the third year in a row, according to the UN. It means 16 of the 17 hottest years on record will have been this century. The scorching temperatures around the world, and the extreme weather they drive, mean the impacts of climate change on people are coming sooner and with more ferocity than expected, according to scientists.

The World Meteorological Organization (WMO) report, published on Monday at the global climate summit in Morocco, found the global temperature in 2016 is running 1.2C above pre-industrial levels. 2016 locked into being hottest year on record, Nasa says. Concrete jungle functions as carbon sink, researchers find: Cement-based materials eventually reabsorb much of the CO<sub>2</sub> released during creation. Cement manufacturing is among the most carbon-intensive industrial processes, but an international team of researchers has found that over time, the widely used building material reabsorbs much of the CO2 emitted when it was made. UCI study says cement plays two roles in global warming. The key ingredient in bridges, roads, building foundations and skyscrapers – cement – has long been viewed as a significant contributor of the greenhouse gas carbon dioxide.

Paris climate deal enters force as focus shifts to action. Image copyright AFP The Paris agreement on climate change has come into force. Governments have agreed to keep the global temperature rise to two degrees Celsius above pre-industrial levels - and preferably 1.5 degrees. "This is a moment to celebrate," United Nations climate chief Patricia Espinosa told Reuters. What climate change deniers, like Donald Trump, believe - BBC Newsbeat. 'Global warming doesn’t care about the election': Nasa scientist warns Donald Trump over interference. A senior Nasa scientist has told Donald Trump he is wrong if he thinks climate change is not happening and warned the President-elect that government scientists are “not going to stand” for any interference with their work.

WIRED Awake: 10 must-read articles for November 17. Robots parking cars: The garage of the future. RFID to chatbots: how the hight street is going digital. Facebook admits flaw in data it shares with advertisers. ITV forecasts a further fall in advertising revenue. M&S to close 30 UK stores and cut back on clothing. Travel in the age of Trump: Will his election victory mean cheaper holidays? Donald Trump and his policies on Nasa, climate change, science, tech and beyond. Q&A: What does Donald Trump’s Presidential victory mean for the economy?