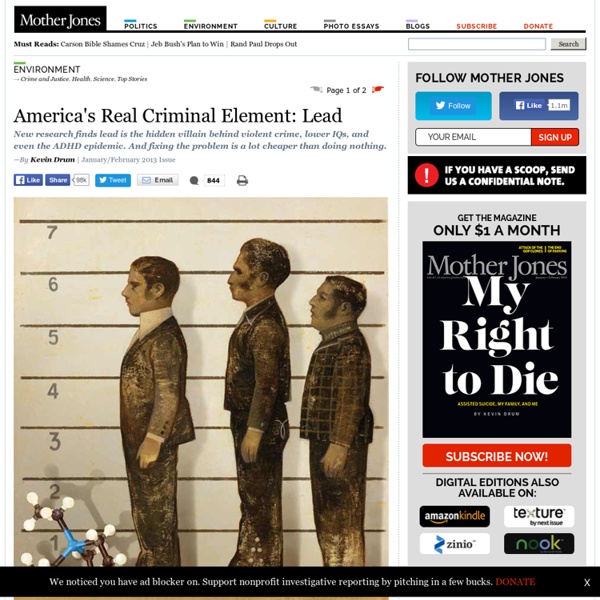 Illustration: Gérard DuBois When Rudy Giuliani ran for mayor of New York City in 1993, he campaigned on a platform of bringing down crime and making the city safe again. It was a comfortable position for a former federal prosecutor with a tough-guy image, but it was more than mere posturing. Since 1960, rape rates had nearly quadrupled, murder had quintupled, and robbery had grown fourteenfold. New Yorkers felt like they lived in a city under siege. Throughout the campaign, Giuliani embraced a theory of crime fighting called "broken windows," popularized a decade earlier by James Q. Giuliani won the election, and he made good on his crime-fighting promises by selecting Boston police chief Bill Bratton as the NYPD's new commissioner. The results were dramatic. But even more remarkable is what happened next. All in all, it seemed to be a story with a happy ending, a triumph for Wilson and Kelling's theory and Giuliani and Bratton's practice. The PB Effect Did Lead Make You Dumber?

did steve levitt write this racist blog post? A few days ago, Steve Levitt wrote a post on the Freakonomics blog that caught many people by surprise. On December 10, 2012, Levitt posted the following on Freakonomics: In academia, it is seen as an honor when someone wants to reprint one of your published papers in an edited volume of collected papers. Ex-Pentagon general target of leak investigation, sources say James Cartwright, a retired general and trusted member of President Barack Obama's national security team, has been informed that he's the target of a Justice Department criminal investigation into a leak about a covert cyberattack on Iran's nuclear program. NBCs Mike Isikoff reports. By Michael Isikoff, National Investigative Correspondent, NBC News Legal sources tell NBC News that the former second ranking officer in the U.S. military is now the target of a Justice Department investigation into a politically sensitive leak of classified information about a covert U.S. cyber attack on Iran’s nuclear program.

Meet Patrick Soon-Shiong, The LA Billionaire Reinventing Your Health Care SANTA MONICA, Calif. –- You have been diagnosed with lung cancer. There is a bewildering array of drugs, and combinations of drugs, that may shrink the tumor and prolong your life. Or they could make matters worse and give you terrible side effects. In the past, this decision was mostly a crude guess, and it was often wrong. No longer. Now, your doctor draws blood and tissue, sends the information to a medical Big Data center that, in seconds, sequences your entire genome and, more importantly, maps how the proteins and the cells in your body are translating your specific DNA mutation into tumor cells.

How Marlboro Used a Network of Young Smokers to Skirt the Laws Against Tobacco Promotion The Juvenile Justice (Care and Protection of Children) Act 2015, which amended the Juvenile Justice Act of 2000, was passed in the winter session of the parliament in December 2015, and came into effect on 15 January 2016. The act allows juveniles between the ages of 16 and 18 years, charged with heinous crimes, to be tried as adults. It was passed amidst the public outcry that followed the release of the juvenile accused of the rape of Jyoti Kumar Pandey in 2012, and was widely criticised for being passed in haste.

Introducing “Freakonomics Experiments”: A New Marketplace Podcast RYSSDAL: Time now for a little Freakonomics Radio. It’s that moment every couple of weeks we talk to the coauthors of the book and the blog of the same name. It is the hidden side of everything, of course. And today it is the brains if you will of the operation, Steven Levitt, professor of economics at the University of Chicago. The worm that turned: How Stuxnet helped heat up cyberarms race IRIB Iranian TV via Reuters TV file Workers are seen in what was described by Iranian state television as the control room at a uranium enrichment facility in Natanz, Iran, in this image taken from video released on Feb. 15. By Robert Windrem, Senior investigative producer, NBC News When the worm dubbed “Stuxnet” wriggled into public view in July 2010, computer security experts recognized almost immediately that it was no ordinary piece of malware.

The Amazing Way This Hospital Is Fighting Physician Burnout Hospitals have procedures and alerts in place to deal with practically anything that could possibly go wrong: "Code Red" for fire, "code blue" for medical emergencies, and "code white" for behavioral disturbances, to name a few. But the Cleveland Clinic in Ohio has introduced a new alert, "Code Lavender," for a more unlikely and much more common threat: stress and burnout. Code Lavender -- which has also been employed at North Hawaii Community Hospital in Waimea -- is a "holistic care rapid response" serving patients and physicians in need of intensive emotional or spiritual support, according to Amy Greene, director of spiritual care at Cleveland Clinic.

The Gift of Death Pathological consumption has become so normalised that we scarcely notice it. By George Monbiot, published in the Guardian 11th December 2012 There’s nothing they need, nothing they don’t own already, nothing they even want. For the First Time in 20 Years, New York's Crime Rate Is on the Rise In April 2011, a 16-year-old Bronx gang member named Dontae Murray was shot to death in the Morris Heights section of the Bronx. His associates blamed two rival gangs and went looking for revenge. The police caught Murray's killer fairly quickly, but over the next 16 months, the murder sparked a bitter street war between Murray's set, Dub City, and the two other gangs, 280 and WTG—a street war in which the gang members acted, in the words of a veteran prosecutor, like they were in a video game shooting at obstacles, not people. At least 14 people were shot.