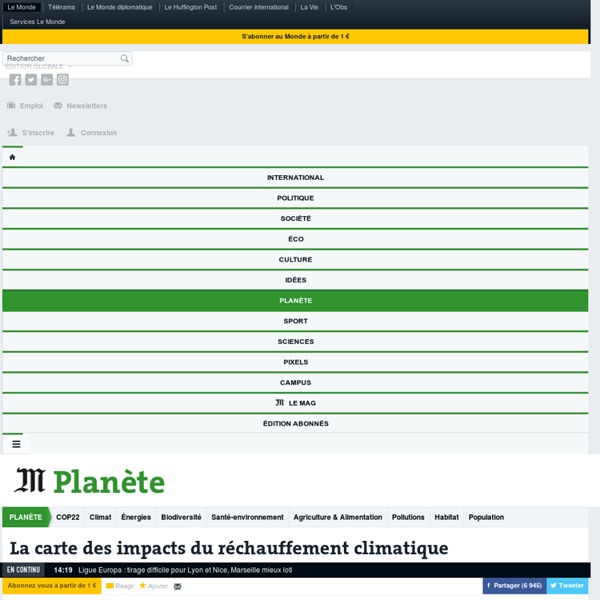 Classrooms in Boston to Get Different Kind of World Map Walk into most any classroom, and you will see a large world map hanging somewhere on the wall. Teachers use maps for subjects like geography and social studies. In the United States and other countries, schoolchildren have long learned from one kind of world map. It is called the Mercator projection. John Kerry says climate change is a weapon of mass destruction During his time as president, George W. Bush’s foreign policy was driven largely by fear of terrorists and WMDs. Obama’s State Department seems at least equally worried about climate change. Secretary of State John Kerry gave a speech in climate-vulnerable Indonesia on Sunday during which he mocked climate deniers and compared the threat of global warming to terrorism and poverty.

When Will Climate Change Make the Earth Too Hot For Humans? To read an annotated version of this article, complete with interviews with scientists and links to further reading, click here. Peering beyond scientific reticence. It is, I promise, worse than you think. DEOS: Current velocities of the Gulf Stream Last updated automagically: Saturday 7 November 2015 21:58:42 CET Since 21 December 2004 the velocity maps show the absolute in stead of relative velocities. This means that the velocities now include the mean Gulf Stream current, based on the CMDT-RIO04 dynamic topography solution by Rio and Hernandez. Starting on 10 January 2005 data from four altimeter satellites (Envisat, Jason-1, TOPEX/Poseidon, GFO) are included in the generations of the Gulf Stream velocity maps.

Maps Have Been Lying To You Your Entire Life The truth is that every map tells a lie, but they don’t all lie about the same thing. For example, Mercator projection maps—one of the most common in use today—exaggerate regions far from the equator. The Goode homolosine projection (pictured below) shows continents that are sized appropriately to one another, but with many interruptions and distortions of distance. 800+ Persuasive Maps - And a Tool for Making Your Own About a week ago Open Culture published an article about Cornell University's Persuasive Cartography collection. I hadn't seen that collection before so I went down a rabbit hole looking at map after map for a good 45 minutes. Persuasive maps aren't maps that you would use to teach a classic geography lesson. That's because persuasive maps are maps that were created for the purpose of sending a message. In Cornell University's Persuasive Cartography collection you will find maps that were created to persuade and satirize. The maps in this collection date back as far as 1491 and up to 2012.

Why the Arctic is drunk right now Perhaps the best analogy yet for the insane cold weather now afflicting the U.S. came from science blogger Greg Laden, who created the viral image above. “Go home, Arctic,” it reads. “You’re drunk.” When it comes to the reason why the United States is currently experiencing life-threatening cold — with temperatures in the negative-20s in the upper Midwest, and wind chills much lower than that — that’s actually not so far from the truth. “It’s basically the jet stream on a drunken path going around the Northern Hemisphere,” explains Rutgers University climate scientist Jennifer Francis. Extreme Weather Is Exploding Around the World. Why Isn’t the Media Talking About Climate Change? This is a rush transcript. Copy may not be in its final form. AMY GOODMAN: This is Democracy Now! I’m Amy Goodman, with Nermeen Shaikh, as we talk about this mass crisis in the world today, the crisis of climate change. Fire tornadoes in California.

lapse: Landsat Satellite Images of Climate Change, via Google Earth Engine TIME and Space | By Jeffrey Kluger Spacecraft and telescopes are not built by people interested in what’s going on at home. Rockets fly in one direction: up. Telescopes point in one direction: out. Of all the cosmic bodies studied in the long history of astronomy and space travel, the one that got the least attention was the one that ought to matter most to us—Earth. Mobile vs. fixed-line phones: A map showing the countries with the most cell phones per capita Mobile-phone subscriptions now outnumber the fixed-line variety by nearly 2-to-1 in the United States. Nine in 10 Americans have a cell phone. Globally speaking, that's nothing—a handful of countries are nearing two mobiles per resident, and in many landline-deprived African nations, the mobile-to-fixed ratio tops 200-to-1. The map below—the first in the new Slate/New America Foundation Map of the Week series—details today's real digital divides.

Maps Provide a Special View of American History When people use maps, they are usually seeking directions to a place they want to go. But Susan Schulten sees much more in maps, like history, culture and art. She shares some of those findings in her book, A History of America in 100 Maps. Schulten travels back in time, using maps of the past. Her book explores the hopes, dreams and fears of ordinary people dating back to before the United States came to be. “There is practically no area of American history where maps don’t sort of enrich our understanding," Schulten said.

Assessing the impact of climate change on a global scale Thirty research teams in 12 different countries have systematically compared state-of-the-art computer simulations of climate change impact to assess how climate change might influence global drought, water scarcity and river flooding in the future. What they found was: The frequency of drought may increase by more than 20 per cent in some regions.Without a reduction in global greenhouse-gas emissions, 40 per cent more people are likely to be at risk of absolute water scarcity.Increases in river flooding are expected in more than half of the areas investigated.Adverse climate change impacts can combine to create global 'hotspots' of climate change impacts. Dr Simon Gosling from the School of Geography at The University of Nottingham co-authored four papers in this unique global collaboration. The results are published this week—Monday 16 December 2013—in a special feature of the Proceedings of the National Academy of Sciences (PNAS). This in turn has an impact on water scarcity.