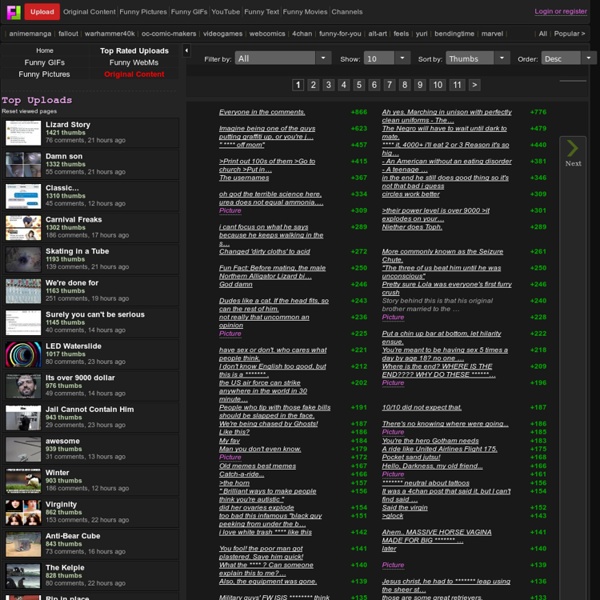 Famous Things, People and Events Archive for 'Bizarre' Famous Obscure Facts More People Should Know About Introduction The world is full of facts â€“ some we think we know and even some facts that challenge the way we think we see the world are not actually true. Every day, research shows us that we were wrong about a certain situation. Here is a sample list of some interesting facts that most […]

mental_floss Blog » That Tattoo Doesn’t Mean What You Think It Means Chinese and Japanese character tattoos have been sweeping the West for a decade or more now, to the extent that most of our readers probably know someone who has one. Perhaps it's just a single discreet Chinese hanzi tucked into the inside of a lady's wrist -- or it could be several huge Japanese kanji blazed across a man's back. They may tell you they know what their tattoo means. But do they really? throwing a banana cream pie in the face of technology. The Joy of Tech is a comic about technology and pop culture, created by Nitrozac and Snaggy, and updated three times a week. We like to feature the people and events that are making today's tech and pop culture news. We've been making comics on the web since early 1999, starting off with After Y2K, and then The Joy of Tech, which is now in its whoa... 17th year! You can follow us on Google+ at +Nitrozac JoT and +Snaggy JoT and +JoyofTech We currently live on Vancouver Island, Canada, where we have a lovely perspective of the silicon valleys to the south. We make The Joy of Tech using Apple computers, mostly on a MacBook Pro and iMac, running Mac OS X.

Help Like many online services we use a feature called a cookie, which is a small data file that is sent to your browser from a web server and stored on your device’s hard drive. References to cookies also include other means of automatically accessing or storing information on your device. You can find out more about cookies at: www.allaboutcookies.org and www.youronlinechoices.eu. Cookies enable us to identify your device when you have logged in. We use cookies that are strictly necessary to enable you to move around the site or to provide certain basic features such as shopping baskets.

Matrices.net Costuming Costuming, cosplay, dressing up, fursuiting, whatever you consider it to be. I think its really cute innocent fun, and I love maskmaking and creating costume items. 50 Cool and Creative Products by Fred & Friends Yesterday I was listening to Supersci, and there was a part talking about how humans always move forward – forward to the better world. While it sounded somehow funny that day, it was probably true! I came across this incredibly innovative Fred and Friends shop (also check Amazon), and it proved the proposition from the song. People do always move forward! Fred takes our old dull things and takes them to the whole new level.

RJLPranks.com The free software listed here is perfect for the most mischievous pranks and computer gags. This software is great for playing jokes on those unsuspecting users. Click on any of our computer pranks below to get more information and download them. Add/Remove Pretends to remove all of the software from your machine using the standard Windows Add/Remove Programs. Avoid

The Inquisitr News Both Jade Roper and Carly Waddell are happy for Chris Soules. As The ... South African rapper Flabba died on Monday at his home in South Africa. His ... INTELLIGENT, cultured, 22y/o wm seeking Asian women (pref. Nihonese) Hello ladies of the internet! I am here today, as are you, to find the love of my life ideally. Now, I am an introspective and reflective man so over my life I've come to realise exactly what I'm looking for in my ideal woman. Personally, I am 22 years old, my name is Perseus, I am attending U of T in the final year of my Engineering degree, and I am a little on the chubby side.

The Inquisitr News A mom crashed her car while taking a cell phone video of her children in the ... For every cute, playful puppy, there’s a cat that just wants to see ... After two hours, firemen in California rescued a naked woman stuck in a ... A Wisconsin ice cream company went viral on Tuesday when a picture of its work van was posted on Reddit.

Plato's "The Allegory of the Cave" "In fact, you get pretty good at understanding how the patterns in the show work, and everyone else chained up is like, 'Holy shit bro, how did you know that that tree was going to fall on that guy?' and you're like, 'It's because I fucking pay attention and I'm smart as shit.' You're the smartest of the chained, and they all revere you." Glaucon: "But Socrates, a tree didn't really hit a guy.

I love funnyjunk, been a fan for almost 10 years. by bizarre Jan 29

Most bizarre collection of funny. by bizarre Mar 25

BEst communit in a site. Awesome funny content FULL of inside jokes by felixthemaster Oct 29