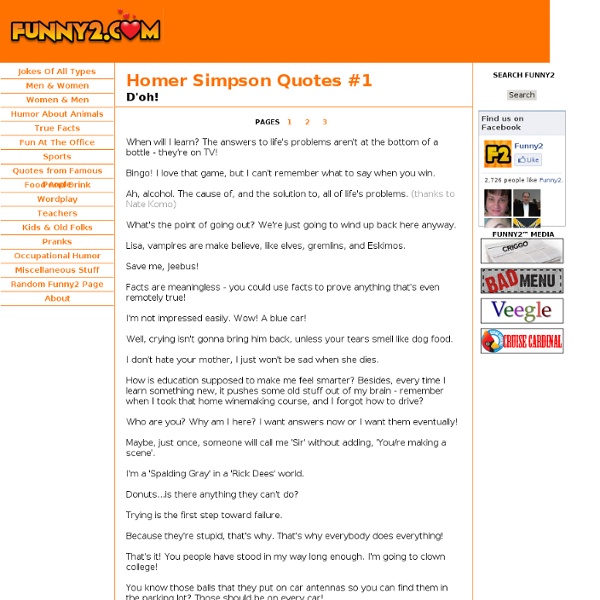 D'oh! I hate Traffic. The band AND the phenomenon! Oh, why do my actions have consequences? I love going to aquatic parks. Thank goodness it's TGIF! Marge, I thought this was an inocuous lunch, but it's become terribly ocuous! When will I learn? Bingo! Ah, alcohol. What's the point of going out? Lisa, vampires are make believe, like elves, gremlins, and Eskimos. Save me, Jeebus! Facts are meaningless - you could use facts to prove anything that's even remotely true! I'm not impressed easily. Well, crying isn't gonna bring him back, unless your tears smell like dog food. I don't hate your mother, I just won't be sad when she dies. How is education supposed to make me feel smarter? Who are you? Maybe, just once, someone will call me 'Sir' without adding, 'You/re making a scene'. I'm a 'Spalding Gray' in a 'Rick Dees' world. Donuts...is there anything they can't do? Trying is the first step toward failure. Because they're stupid, that's why. That's it! Marge, I'm going to miss you so much. English?

ERUDITE CONCEPTS If you're not familiar with the work of Boswell D. Rabbitsmith, he's the famous erudite scientist who once said: "I woke up one morning, and all of my stuff had been stolen and replaced by exact duplicates." His mind sees things differently than most of us do, to our amazement and amusement. Here are some of his gems: (He also makes his living as a comedian by the name of Steve Wright....) 1 - I'd kill for a Nobel Peace Prize. 2 - Borrow money from pessimists -- they don't expect it back. 3 - Half the people you know are below average. 4 - 99% of lawyers give the rest a bad name. 5 - 82.7% of all statistics are made up on the spot. 6 - A conscience is what hurts when all your other parts feel so good. 7 - A clear conscience is usually the sign of a bad memory. 8 - If you want the rainbow, you got to put up with the rain. 9 - All those who believe in psychokinesis, raise my hand. 10 - The early bird may get the worm, but the second mouse gets the cheese. 12 - OK, so what's the speed of dark?

& so we sum it up & I don’t understand your point. If you are saying “I am…” cannot be followed by a noun, you are wrong. I am a person. I am the mayor. “Person” and “mayor” are nouns. Top 100 Best One-Liners 2010 1 I'm a humble person, really. I'm actually much greater than I think I am. 2 Do not argue with an idiot. 3 Why is it so hard for women to find men that are sensitive, caring, and good-looking? 4 The last thing I want to do is hurt you. 5 Sex is not the answer. 6 Love is a temporary insanity curable by marriage. 7 We live in a society where pizza gets to your house before the police. 8 I asked God for a bike, but I know God doesn’t work that way. 9 We never really grow up, we only learn how to act in public. 10 Men have two emotions: Hungry and Horny. 11 Light travels faster than sound. 12 War does not determine who is right – only who is left. 13 If I agreed with you we’d both be wrong. 14 The early bird might get the worm, but the second mouse gets the cheese. 15 Politicians and diapers have one thing in common. 16 Children: You spend the first 2 years of their life teaching them to walk and talk. 17 I want to die peacefully in my sleep, like my grandfather.. 66 I intend to live forever.

Funny Drunk Quotes Drinking is a favorite past-time of many people around the world. It helps us relax, be social, and hopefully have a good time. Nonetheless, much of our drinking history falls from religious customs and ceremonies. Of course, being drunk isn't always what it is cracked up to be. Below are a few funny quotes about drinking or being drunk. A drunk mans words are a sober man's thoughts.Steve Fergosi But the greatest love--the love above all loves, Even greater than that of a mother... An intelligent man is sometimes forced to be drunk to spend time with his fools.Ernest Hemingway My dad was the town drunk. I'm not drunk, all right. You're not drunk if you can lie on the floor without holding on.Dean Martin A drunk was in front of a judge. It takes only one drink to get me drunk. The problem with some people is that when they aren't drunk, they're sober.William Butler Yeats The proper behavior all through the holiday season is to be drunk. Page: 1 | 2 More alcohol quotes:B - About drinking beer.