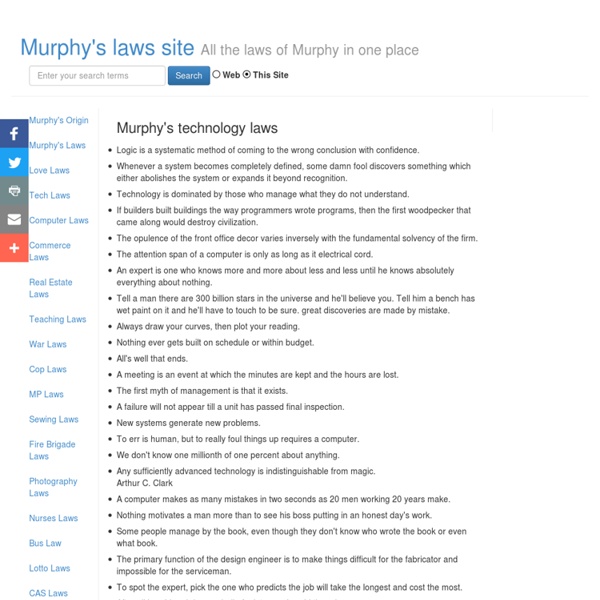 Murphy's technology laws Logic is a systematic method of coming to the wrong conclusion with confidence. Whenever a system becomes completely defined, some damn fool discovers something which either abolishes the system or expands it beyond recognition.

Enable Thumbnail Previews for Firefox in Windows 7 Taskbar - How Are you tired of waiting for the official activation of Taskbar Thumbnail Previews in Firefox? See how easy it is to enable them now with a simple about:config hack. Note: We have briefly covered this before but present it here in a more detailed format. Before For our example we opened all of the websites in the HTG Network in tabs… When hovering over the Firefox Icon in the Taskbar, you only see the one thumbnail. 1.) 2.) Hack the About:Config Settings To get the Thumbnail Previews working you will need to make a modification in the about:config settings. In the Filter Address Bar either type or copy and paste the following about:config entry: browser.taskbar.previews.enable After you enter that in, you should see the entry listing as shown here. Once the about:config entry has been changed, you will need to restart Firefox for it to take effect. After restarting Firefox on our system the Thumbnail Previews were definitely looking very nice. Conclusion

Neurotic Poets - Edgar Allan Poe Personal tragedy was, unfortunately, a recurring theme throughout Edgar Allan Poe's life. Born in Boston in 1809 to actor parents, he never knew his father David Poe, who left his mother and disappeared soon after Edgar was born, then died in Virginia in 1810. His mother, who suffered from tuberculosis (then called consumption), died in Richmond, Virginia in late 1811, orphaning Edgar, his older brother William Henry, and half-sister Rosalie. Frances Allan of Richmond convinced her wealthy merchant husband John to take the child Edgar into their home. It was here that Edgar was to be raised, with his early influences being the stories of house slaves and the tales told by skippers and sea merchants. “ From childhood's hour I have not been As others were; I have not seen As others saw; I could not bring My passions from a common spring. ” ~ Poe in 'Alone' ~ Once back in Richmond, Edgar began writing poetry regularly when he was in his early teens. By the end of the year, Mr.

Book-A-Minute Classics Got another book report to do? English teachers have the inconsiderate habit of assigning mammoth-sized works of literature to read and then actually expecting you to do it. This wouldn't be so bad except that invariably the requisite reading is as boring as fly fishing in an empty lake. "That's nice," you say, "but I don't believe you." Latest additions: 4/6/12 Little Women by Louisa May Alcott. And, on Book-A-Minute SF/F... If you liked Book-A-Minute Classics, try our other Book-A-Minute pages: And try our companion site: RinkWorks Book-A-Minute Classics is a RinkWorks production. Talk Back Talk to us! Legalese Titles and trademarks are the property of their owners.

Bandwidth Place | Internet Speed Test Online Shakespeare Course: Shakespeare After All with Harvard Faculty Marjorie Garber, PhD, William R. Kenan Jr. Professor of English and American Literature and Language and of Visual and Environmental Studies, Harvard University This free online Shakespeare course focuses on Shakespeare’s later plays beginning with Measure for Measure and ending with The Tempest. Building on the discussions of individual plays in Marjorie Garber’s book Shakespeare After All, this course takes note of key themes, issues, and interpretations of the plays, focusing on questions of genre, gender, politics, family relations, silence and speech, and cultural power from both above and below (royalty, nobility, and the court; clowns and fools). Designed as part lecture-presentation and part discussion, this is a course that is meant to be interactive, taking up topics generated by students as well as by the instructor. The lecture videos The Quicktime and MP3 formats are available for download, or you can play the Flash version directly. Introduction Troilus and Cressida Othello

popurls® | the genuine news aggregator for the latest web buzz