The illustrated guide to a Ph.D. 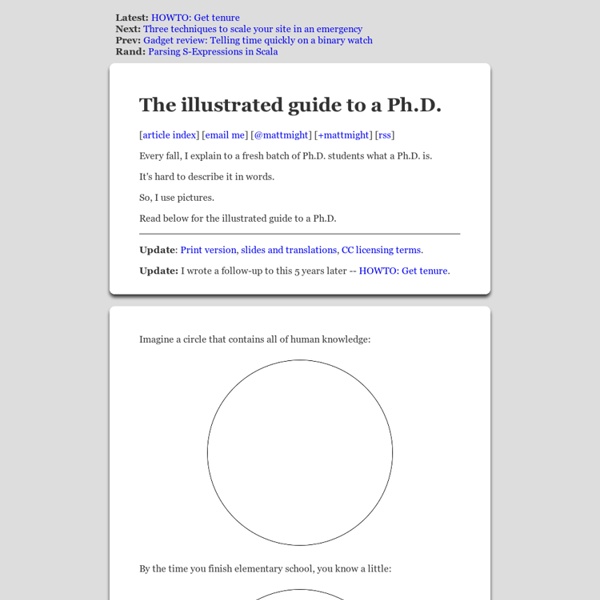 Imagine a circle that contains all of human knowledge: By the time you finish elementary school, you know a little: By the time you finish high school, you know a bit more: With a bachelor's degree, you gain a specialty: A master's degree deepens that specialty: Reading research papers takes you to the edge of human knowledge: Once you're at the boundary, you focus: You push at the boundary for a few years: Until one day, the boundary gives way: And, that dent you've made is called a Ph.D Of course, the world looks different to you now: So, don't forget the bigger picture: Keep pushing. There's a bit more below, but I also wrote a follow-up 5 years after the illustrated guide which may be of interest -- HOWTO: Get tenure. Related posts If you like these posts, then I recommend the book A PhD Is Not Enough Get it in print; fund students; save lives By request, a print version of The Illustrated Guide to a Ph.D. is on sale. Click here to preview or buy it. Why biology? License: Creative Commons Resources

Logo Design Gone Wrong: 10 Offbeat Examples Logos define brands and they create corporate images because logos are what sticks in people’s mind and creates associations. Think Coca-Cola, Nike, or McDonald’s – what do you instantly picture in mind? Right, their logos. Great logos will never allow their consumers forget about the brand – it’s what prompts them choose one product over alternative: people tend to stick to something familiar, something that brings up positive associations. While the implementation of an effective logo can set a company up for success, the opposite is also possible. When outside input isn’t gathered to evaluate logo prototypes, designers can miss major steps and the result can be disastrous.

Productivity hints, tips, hacks and tricks for graduate students and professors Contents Jump to: My philosophy: Optimize transaction costs Distilled into empirically-wrought principles, my high-level advice is: Reduce transaction costs to engaging in productive behavior. Erect transaction costs to engaging in counter-productive behavior. 10 Puzzle Websites to Sharpen Your Programming Skills Solving programming puzzles is a fun way to develop your logical and problem solving abilities. Also, when you’re familiarizing yourself with a new programming language, solving puzzles for that language can help speed up the learning process. Here are the top 10 popular programming puzzle sites that will help test your thinking and improve your programming, problem solving, and logical thinking skills. 1. Programming Praxis

Classic Photo's of Celeberties Some classic photo’s I got compiled up! I do not own these pictures, someone else had taken them…i am unsure who to give credit for, but enjoy! Jimi Hendrix & Mick Jagger, New York, 1969 Electric meat Don't touch the electric meat Some time ago, a primatologist ran an experiment with chimpanzees. The experiment involved a hanging pallet of meat that, when touched, sent an electric shock througout the entire chimp cage. At first, the chimps responded with bewilderment every time one of them grabbed the meat and the shock rippled through the cage. Eventually, the chimps realized that the shocks came from the meat. The chimps began to attack and beat, savagely even, any chimp that approached the meat, and over time, fewer beatings were necessary.

Kurt Vonnegut explains drama I was at a Kurt Vonnegut talk in New York a few years ago. Talking about writing, life, and everything. He explained why people have such a need for drama in their life. He said, “People have been hearing fantastic stories since time began. The problem is, they think life is supposed to be like the stories. Let's look at a few examples.” The Best Of The Steve &Bill Meme After sitting down together at All Things Digital 5 in the historic Steve Jobs and Bill Gates discussion, the images of a convivial Steve Jobs and Bill Gates became internet meme fodder. And so the Steve Jobs and Bill Gates Meme, or simply the Steve and Bill meme, in all their rich glory, was born: 10 tips on how to give an academic talk The biggest mistake academics make is misjudging their audience. I've been to (many) talks where the talk itself was presented to one or two people in a room of hundreds. (Disclaimer: I've given my fair share of these talks too.)

Singapores Online Community - Natures Weirdest Creatures here's some creatures which are weird as hell.. Seapig This is some kind of weird deep sea sea-cucumber.

haha I have no idea how accurate this is, but it's cool to see an idea expressed from someone whom is probably way further into life than I am. by gnarlycharlie4 Feb 15