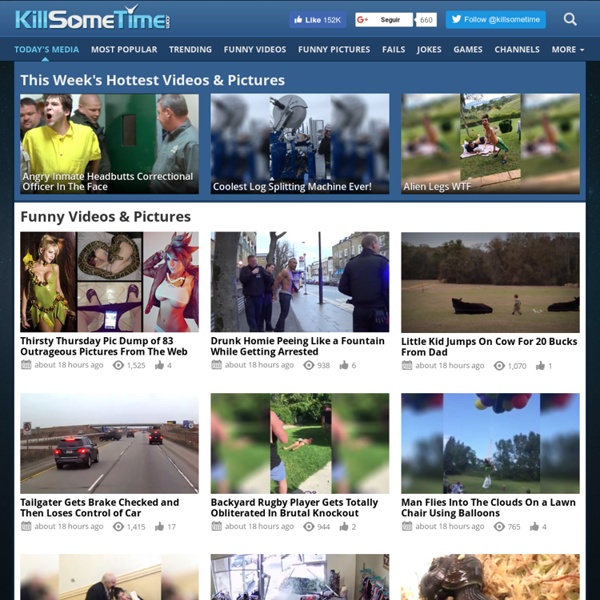 This gallery includes 15 Pictures. Imagine if you were hungry and went to the kitchen to find something to eat and came across human soup! A Ukrainian jet gives Russian soldiers a warning fly bye. Because having 4 wheels is overrated! He's either the worlds greatest magician or he has some sick video editing skills. That could surely go horribly wrong pretty quickly.

Famous Things, People and Events Archive for 'Bizarre' Famous Obscure Facts More People Should Know About Introduction The world is full of facts â€“ some we think we know and even some facts that challenge the way we think we see the world are not actually true. Every day, research shows us that we were wrong about a certain situation. Here is a sample list of some interesting facts that most […]

Top 10 Hilarious Websites Of Human Misery It’s seems like people have always been hardwired to laugh at the misfortune of others. It transcends all cultures, nations, and ages. As you read these words, a group of school kids in Hong Kong are peeing their pants laughing at a kid who did a faceplant into a mud puddle, somebody in Paris is guffawing at a guy getting a whifflebat to the crotch, and a grandma in Texas is chuckling under her breath at a cousin who doesn’t know his fly is undone. 50 Cool and Creative Products by Fred & Friends Yesterday I was listening to Supersci, and there was a part talking about how humans always move forward – forward to the better world. While it sounded somehow funny that day, it was probably true! I came across this incredibly innovative Fred and Friends shop (also check Amazon), and it proved the proposition from the song. People do always move forward! Fred takes our old dull things and takes them to the whole new level.

It is possible to understand Engineers - Where there's a will, there's a way. Understanding Engineers #1 Two engineering students were biking across a university campus when one said, "Where did you get such a great bike?" The second engineer replied, "Well, I was walking along yesterday, minding my own business, when a beautiful woman rode up on this bike, threw it to the ground, took off all her clothes and said, "Take what you want." The first engineer nodded approvingly and said, "Good choice, The clothes probably wouldn't have fit you anyway." The Inquisitr News Both Jade Roper and Carly Waddell are happy for Chris Soules. As The ... South African rapper Flabba died on Monday at his home in South Africa. His ...

The answer machine at a psychiat The answer machine at a psychiatric hospital "Hello, welcome to the Mental Health Hotline. If you are: Obsessive-Compulsive, press 1, repeatedly. Co-Dependent, please ask someone to press 2 for you. Multiple Personalities, press 3, 4, 5, and 6. Paranoid, we know who you are and what you want. The Inquisitr News A mom crashed her car while taking a cell phone video of her children in the ... For every cute, playful puppy, there’s a cat that just wants to see ... After two hours, firemen in California rescued a naked woman stuck in a ... A Wisconsin ice cream company went viral on Tuesday when a picture of its work van was posted on Reddit. MyLifeIsAverage - Life is pretty normal today Holytaco » Holytaco Expand your vocabulary!