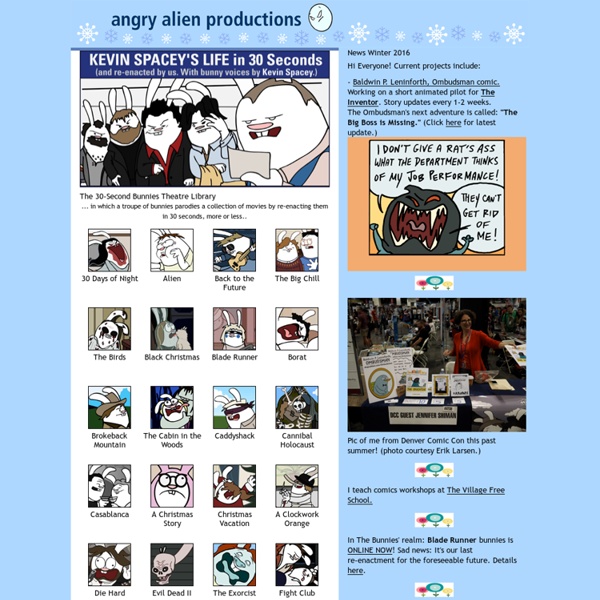 April 2014 The bunnies have re-enacted Kevin Spacey's life! We proudly present a bunnification of his key plot points (featuring Kevin Spacey himself doing bunny voices)... Stay up to date with our action: - Bunnies on Facebook - The Bunnies' Twitter and Shiman's Twitter - Angry Alien on Facebook - The Bunnies in the media - Bunny re-enactment request list - Bunnies FAQ | Angry Alien FAQ BUNNIES PARTNER WITH FEARNET FOR SEASON 2...NOW IN PRODUCTION! The bunnies and FEARnet team up again to produce a new season of floppy-eared movie re-enactments.

Atomic bond types discernible in single-molecule images 13 September 2012Last updated at 21:36 GMT By Jason Palmer Science and technology reporter, BBC News The bonds at centre appear shorter than those at the edges, as more electrons are present in them A pioneering team from IBM in Zurich has published single-molecule images so detailed that the type of atomic bonds between their atoms can be discerned. The same team took the first-ever single-molecule image in 2009 and more recently published images of a molecule shaped like the Olympic rings.

The latest news and emerging trends in music Mass Appeal Records' Fashawn tells us about his new album, working with Nas, and lists his favorite skaters. The ad has become a viral sensation. According to Brockhampton: "We chose to go against the grain for the sake of keeping our dreams alive." Comics Grammar and Tradition Comic Book Grammar & Tradition by Nate PiekosUpdated 2013 Special thanks to Todd Klein, Clem Robins, Scott Allie and Jason Arthur for their time and contributions. Comic book lettering has some grammatical and aesthetic traditions that are unique. What follows is a list that every letterer eventually commits to his/her own mental reference file.

Saturday Morning Breakfast Cereal March 16, 2011 Going crazy before flying out to Chicago tomorrow! You're all gonna come see me at C2E2, right? Booth 854! Plus, we'll have a panel Sunday with me and James. Discuss this comic in the forum MARS Curiosity Rover first Color 360 Panorama - Round the world with panoramas copyright @ Hans Nyberg - panoramas.dk · www.qtvr.dk · www.360-foto.dk · www.virtualdenmark.dk · Privacy Policy I panoramas.dk is hosted by: VRWAY Important info about Copyright: All panoramas featured at panoramas.dk are copyright the individual photographers. Linking directly to the movies Quicktime or Flash is strictly forbidden.

Black hole glitch - Smashpedia, the Super Smash Bros. wiki. The black hole glitch is a glitch in Melee that causes several of Peach's turnips to become stuck in a small area. If a character touches the concentrated turnips, they will receive massive damage in seconds. The glitch was discovered by Aftermath and Juce in late 2004. The 6 Most Ingenious Misuses of Military Hardware War is serious business. Life-and-death stuff. Brutal, bloody and unrelenting. But who says it can't also be fun?! Whether it's fryin' up some bacon, going sledding, or just taking the gang out for ice cream, here are six ingenious uses of combat equipment that prove a little war is no excuse to go without a party.

Berners Street Hoax The Berners Street Hoax was perpetrated by Theodore Hook in the City of Westminster, London, in 1810. Hook had made a bet with his friend, Samuel Beazley, that he could transform any house in London into the most talked-about address in a week, which he achieved by sending out thousands of letters in the name of Mrs Tottenham, who lived at 54 Berners Street, requesting deliveries, visitors, and assistance. On 27 November, at five o’clock in the morning, a sweep arrived to sweep the chimneys of Mrs Tottenham's house. The maid who answered the door informed him that no sweep had been requested, and that his services were not required.