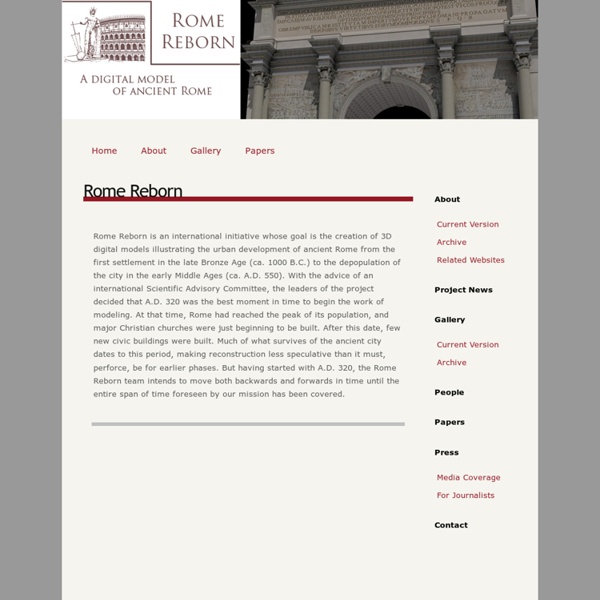 Rome Reborn is an international initiative whose goal is the creation of 3D digital models illustrating the urban development of ancient Rome from the first settlement in the late Bronze Age (ca. 1000 B.C.) to the depopulation of the city in the early Middle Ages (ca. A.D. 550). With the advice of an international Scientific Advisory Committee, the leaders of the project decided that A.D. 320 was the best moment in time to begin the work of modeling. At that time, Rome had reached the peak of its population, and major Christian churches were just beginning to be built. After this date, few new civic buildings were built. Much of what survives of the ancient city dates to this period, making reconstruction less speculative than it must, perforce, be for earlier phases.

Teaching with ORBIS: Maps, Environments, and Interpretations in Ancient Rome - American Historical Association After a few minutes of tinkering with ORBIS: The Stanford Geospatial Network Model of the Roman World, one of my students exclaimed, “It’s like Google Maps, but for Rome!” She wasn’t the first to make that connection. Four years ago Curt Hopkins noticed the similarity in an article for Ars Technica. At first glance it makes a lot of sense. Like Google Maps, ORBIS plots a route between two points. The ORBIS model allows users to choose between 632 sites in the Roman Empire (circa 200 CE) and simulate a journey between the sites, complete with information concerning the duration, distance traveled, and cost of the journey based on the tetrarchic price edict of 301 CE.

The 10 Most Not-So-Puzzling Ancient Artifacts: The Ica Stones As we move on down the line of the 10 most not-so-puzzling ancient artifacts, we come to the Ica Stones. These are perhaps the most perplexing to me, since I don’t understand how anyone can look at these and think they are real. A bad day for Fred Flintstone These little gems range in size from cobbles to boulders, and depict a wide variety of images from humans co-existing with dinosaurs, to advanced surgery, and spaceships with advanced technology. Apparently, this one is a modern hoax starting in 1966 when one, Dr. Javier Cabrera Darquea, a Peruvian physician, received a small carved rock as a gift for his birthday. Rome set to celebrate Augustus' 2000th anniversary Rome, August 5 - A schedule of special events was announced on Tuesday to mark the 2,000th anniversary on August 19 of the death of Augustus, the first emperor of Rome who ruled for 41 years from 27 BC until his death in 14 AD. Culture Minister Dario Francheschini and Rome Archeology Superintendent Mariarosaria Barbera presented the schedule of events, including exhibitions of artifacts that be open to the public for the first time ever. On the Palatine Hill, where Augustus made his home and which became the seat of imperial power during his reign, the Palatine Museum will unveil a restored ground floor with a new annex, as well as an upper floor outfitted with new multimedia equipment and a movie on the life of Augustus and his reign. In the House of Augustus, all of the rooms that have been excavated thus far will be on display to the public for the first time. Visits are by reservation and open to small groups only, to preserve the site.

PBS: The Roman Empire As with many cultures, a person’s quality of life depended in many ways on their rank within the social structure. Two Romans living at the same time in the same city could have very different lives. Rich… For wealthy Romans, life was good. They lived in beautiful houses – often on the hills outside Rome, away from the noise and the smell. They enjoyed an extravagant lifestyle with luxurious furnishings, surrounded by servants and slaves to cater to their every desire.

Mini Metro There's a lot more in the full game: procedural audio by Disasterpeace, infinite-play zen mode, the unlockable extreme mode, leaderboards, multiple maps and themes based on real-world cities, and more cool stuff. iPhone, iPad, and Android You can get Mini Metro right now at the App Store and Google Play: Windows, macOS, and Ubuntu Mini Metro is available for desktop platforms through a variety of storefronts. Bored at work? Here’s a Google-style digital map of the Roman Empire to play with Zac Goldsmith, the people’s dog-whistle-prone freedom fighter against the scourge of Heathrow expansion, has lost his pointless and taxpayers’-money-wasting campaign to be re-elected as an independent MP for Richmond Park & North Kingston in an unnecessary by-election that he himself forced. Sad! But in the midst of all this Heathrow grandstanding, preceded as it was by the advert-scattered battle between Heathrow and Gatwick, another London “hub” has been quietly expanding. In July, Philip Hammond, Chris Grayling and Sajid Javid clubbed together in their new roles as chancellor, transport secretary, and communities and local government secretary respectively, and announced a £344m expansion programme for London City Airport.

Ten Archaeological Enigmas from Across the Globe One of the best things about archaeology is uncovering places, artifacts, and human remains that answer long-held mysteries about our past and our origins. But frequently discoveries are made that do not solve ancient puzzles, but simply raise more questions to be answered. Here we feature ten such discoveries – from indecipherable manuscripts to Frankenstein mummies, and incredible artifacts from unknown civilizations. Is Rome’s Pantheon a Giant Sundial? Rome’s majestic Pantheon may have been designed to represent a sundial, with its circular opening shedding beams of light to mark the passage of time and emphasize the emperor’s divine power, according to new research. The interior of Rome’s Pantheon, with the oculus at the top of the domed ceiling casting a beam of light on the wall. (Credit: Emilio Labrador/Wikimedia Commons) One of the best preserved and most architecturally sophisticated Roman monuments, the Pantheon has remained in constant use and inspired numerous other buildings throughout its 2,000-year history. Yet the initial purpose and unique design of the imposing structure, which boasts a columned portico and the largest unreinforced concrete dome in the world, continues to intrigue historians.

British Museum: Ancient Rome In legend Rome was founded in 753 BC by Romulus, its first king. In 509 BC Rome became a republic ruled by the Senate (wealthy landowners and elders) and the Roman people. During the 450 years of the republic Rome conquered the rest of Italy and then expanded into France, Spain, Turkey, North Africa and Greece.