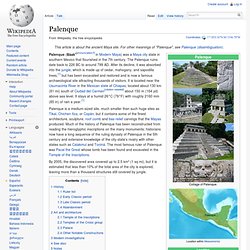 In Modern Maya) was a Maya city state in southern Mexico that flourished in the 7th century. The Palenque ruins date back to 226 BC to around 799 AD. After its decline, it was absorbed into the jungle, which is made up of cedar, mahogany, and sapodilla trees,[1] but has been excavated and restored and is now a famous archaeological site attracting thousands of visitors. It is located near the Usumacinta River in the Mexican state of Chiapas, located about 130 km (81 mi) south of Ciudad del Carmen[citation needed] about 150 m (164 yd) above sea level. It stays at a humid 26°C (79°F) with roughly 2160 mm (85 in) of rain a year.[1] Pompeii. The city of Pompeii was an ancient Roman town-city near modern Naples in the Italian region of Campania, in the territory of the comune of Pompei. 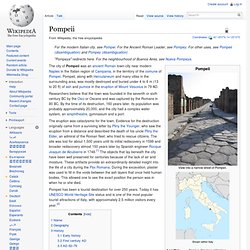 Pompeii, along with Herculaneum and many villas in the surrounding area, was mostly destroyed and buried under 4 to 6 m (13 to 20 ft) of ash and pumice in the eruption of Mount Vesuvius in 79 AD. Researchers believe that the town was founded in the seventh or sixth century BC by the Osci or Oscans and was captured by the Romans in 80 BC. By the time of its destruction, 160 years later, its population was probably approximately 20,000, and the city had a complex water system, an amphitheatre, gymnasium and a port. The eruption was cataclysmic for the town. Evidence for the destruction originally came from a surviving letter by Pliny the Younger, who saw the eruption from a distance and described the death of his uncle Pliny the Elder, an admiral of the Roman fleet, who tried to rescue citizens. Name Geography History Early history First century AD. Kara Cooney. Dr. 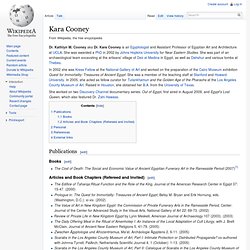 Kathlyn M. Cooney aka Dr. Kara Cooney is an Egyptologist and Assistant Professor of Egyptian Art and Architecture at UCLA. She was awarded a PhD in 2002 by Johns Hopkins University for Near Eastern Studies. American Research Center in Egypt (ARCE) Jean-François Champollion. Jean-François Champollion (23 December 1790 – 4 March 1832) was a French scholar, philologist and orientalist, decipherer of the Egyptian hieroglyphs. 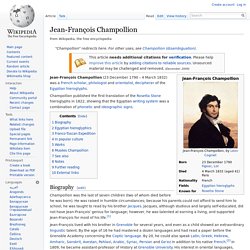 Biography[edit] Champollion was the last of seven children (two of whom died before he was born). He was raised in humble circumstances; because his parents could not afford to send him to school, he was taught to read by his brother Jacques. Jacques, although studious and largely self-educated, did not have Jean-François' genius for language; however, he was talented at earning a living, and supported Jean-François for most of his life.[1] Champollion married Rose Blanc (1794–1871) in 1818.

Egyptian hieroglyphics[edit] Ancient Egypt Research Associates. Tutankhamun. Tutankhamun (alternatively spelled with Tutenkh-, -amen, -amon) was an Egyptian pharaoh of the 18th dynasty (ruled ca. 1332 BC – 1323 BC in the conventional chronology), during the period of Egyptian history known as the New Kingdom. 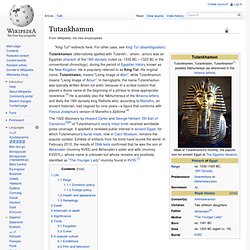 He is popularly referred to as King Tut. His original name, Tutankhaten, means "Living Image of Aten", while Tutankhamun means "Living Image of Amun". In hieroglyphs, the name Tutankhamun was typically written Amen-tut-ankh, because of a scribal custom that placed a divine name at the beginning of a phrase to show appropriate reverence.[3] He is possibly also the Nibhurrereya of the Amarna letters, and likely the 18th dynasty king Rathotis who, according to Manetho, an ancient historian, had reigned for nine years—a figure that conforms with Flavius Josephus's version of Manetho's Epitome.[4] Life When he became king, he married his half-sister, Ankhesenpaaten, who later changed her name to Ankhesenamun. 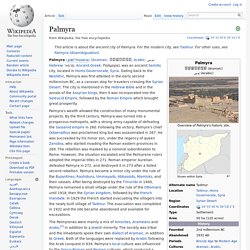 Machu Picchu. Machu Picchu (in hispanicized spelling, Spanish pronunciation: [ˈmatʃu ˈpiktʃu]) or Machu Pikchu (Quechua machu old, old person, pikchu peak; mountain or prominence with a broad base which ends in sharp peaks,[1] "old peak", pronunciation [ˈmɑtʃu ˈpixtʃu]) is a 15th-century Inca site located 2,430 metres (7,970 ft) above sea level.[2][3] It is located in the Cusco Region, Urubamba Province, Machupicchu District in Peru.[4] It is situated on a mountain ridge above the Sacred Valley which is 80 kilometres (50 mi) northwest of Cusco and through which the Urubamba River flows. 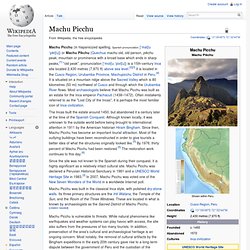 Most archaeologists believe that Machu Picchu was built as an estate for the Inca emperor Pachacuti (1438–1472). Angkor. Angkor (Khmer: អង្គរ or នគរ, "Capital City")[1][2] is a region of Cambodia that served as the seat of the Khmer Empire, which flourished from approximately the 9th to 15th centuries. 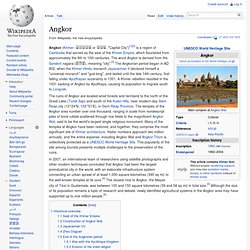 The word Angkor is derived from the Sanskrit nagara (नगर), meaning "city".[3] The Angkorian period began in AD 802, when the Khmer Hindu monarch Jayavarman II declared himself a "universal monarch" and "god-king", and lasted until the late 14th century, first falling under Ayutthayan suzerainty in 1351. A Khmer rebellion resulted in the 1431 sacking of Angkor by Ayutthaya, causing its population to migrate south to Longvek. Petra. Petra (Arabic: البتراء, Al-Batrāʾ, Ancient Greek Πέτρα) is a historical and archaeological city in the southern Jordanian governorate of Ma'an that is famous for its rock-cut architecture and water conduit system. 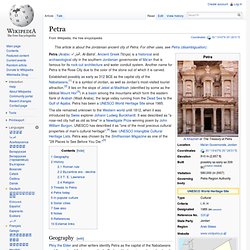 Another name for Petra is the Rose City due to the color of the stone out of which it is carved. The site remained unknown to the Western world until 1812, when it was introduced by Swiss explorer Johann Ludwig Burckhardt. It was described as "a rose-red city half as old as time" in a Newdigate Prize-winning poem by John William Burgon. UNESCO has described it as "one of the most precious cultural properties of man's cultural heritage".[4] See: UNESCO Intangible Cultural Heritage Lists. Petra was chosen by the Smithsonian Magazine as one of the "28 Places to See Before You Die Geography[edit] Show Caves of the World. Treasure Works. Archaeology (cgittings StumbleUpon) Minerva magazine. History and archaeology on twitter...