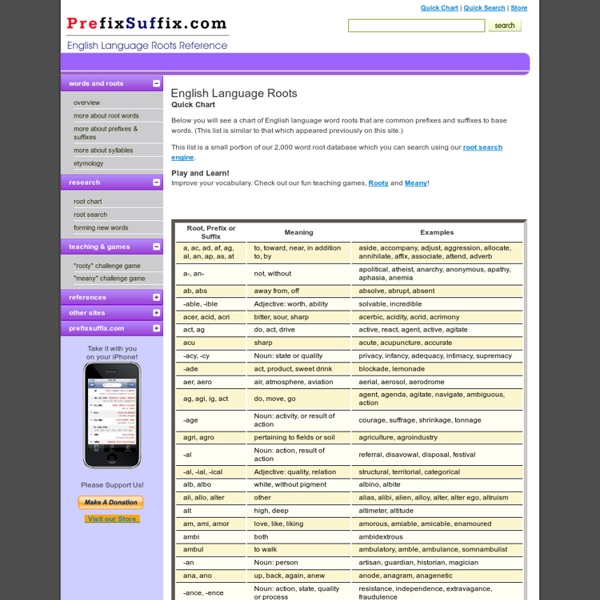 Got to Teach!: Teaching Greek and Latin Roots Some estimate that up to 75% of the English language is derived from Greek and Latin roots. They truly are the "building blocks" of English and present teachers with an extremely powerful framework to nurture students' vocabulary development. Why should you be teaching Greek and Latin roots to your students? 1. The World's Most Spoken Languages And Where They Are Spoken This beautifully illustrated infographic (above), designed by South China Morning Post’s graphics director Alberto Lucas Lopéz, shows the most spoken known languages in the world and where they’re spoken by the 6.3 billion people included in the study. Based on records collated from the database Ethnologue, the infographic illustrates the wide-ranging facts and figures of the world’s living languages catalogued since 1951. “There are at least 7,102 known languages alive in the world today. Twenty-three of these languages are a mother tongue for more than 50 million people.

Root Word Dictionary - The web's largest root dictionary! Root Word Dictionary is the largest online dictionary of word roots. Here, you'll find the meanings of all the Greek and Latin root words commonly used in constructing biological and medical terminology. The list is alphabetical, which lets you look roots up even if you're not sure about their exact spellings. In the index above, click on the first letter of the root you seek. Sentence Structure Games for Middle School In middle school, students learn the different types of sentences: simple, compound, complex and compound-complex. They also learn the components needed for each type of sentence, such as independent clauses, coordinating conjunctions and subordinate clauses. While most students learn to recognize sentences and sentence components by diagramming, sentence structure games can be more fun for your class and allow students to learn from each other. Sentence Scramble Games

greek and latin roots This past week was full of questions about how to study vocabulary for words you can not find associations to. Vocabulary can be such a huge part of comprehension. Here are a few ideas I have in mind. 1. Word pictures Root Words, Roots and Affixes Many English words are formed by taking basic words and adding combinations of prefixes and suffixes to them. A basic word to which affixes (prefixes and suffixes) are added is called a root word because it forms the basis of a new word. The root word is also a word in its own right. For example, the word lovely consists of the word love and the suffix -ly.

Latin Roots, Prefixes, and Suffixes Latin was the language spoken by the ancient Romans. As the Romans conquered most of Europe, the Latin language spread throughout the region. Over time, the Latin spoken in different areas developed into separate languages, including Italian, French, Spanish, and Portuguese. These languages are considered “sisters,” as they all descended from Latin, their “mother” language. In 1066 England was conquered by William, duke of Normandy, which is in northern France. For several hundred years after the Norman invasion, French was the language of court and polite society in England.