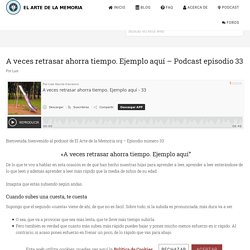 Ejemplo aquí” De lo que te voy a hablar en esta ocasión es de qué han hecho nuestras hijas para aprender a leer, aprender a leer enterándose de lo que leen y además aprender a leer más rápido que la media de niños de su edad. Imagina que estás subiendo según andas. Cuando subes una cuesta, te cuesta. Demonym. A demonym (/ˈdɛmənɪm/; from Greek δῆμος, dêmos, "people, tribe" and όνομα, ónoma, "name") or gentilic (from Latin gentilis, "of a clan, or gens")[1] is a word that identifies residents or natives of a particular place and is usually derived from the name of the place.[2] Examples of demonyms include Cochabambino, for a person from the city of Cochabamba; American for a person from the country called the United States of America; and Swahili, for a person of the Swahili coast. 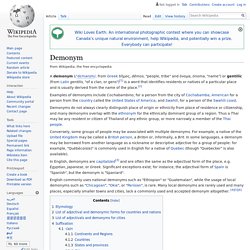 Demonyms do not always clearly distinguish place of origin or ethnicity from place of residence or citizenship, and many demonyms overlap with the ethnonym for the ethnically dominant group of a region. Anexo:Gentilicios. El gentilicio es la forma en la que nos referimos a las personas de otros paises,territorios o depedencias del mundo. 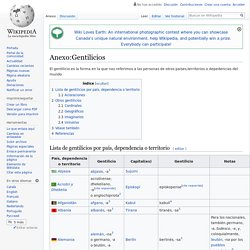 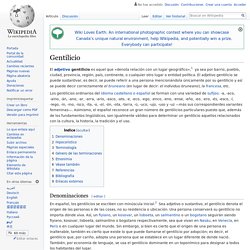 Deutsch lernen. Alkmene to Anaetius * People, Places, & Things * Greek Mythology: From the Iliad to the Fall of the Last Tyrant. Note this entire site has moved to Please update your links to us to use this new web address. 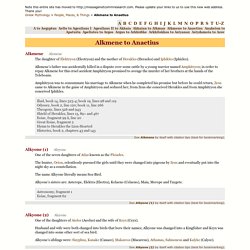 Thank you! > > Alkmene to Anaetius Alkmene Alcmene The daughter of Elektryon (Electryon) and the mother of Herakles (Heracles) and Iphikles (Iphicles). Alkmene’s father was accidentally killed in a dispute over some cattle by a young warrior named Amphitryon; in order to repay Alkmene for this cruel accident Amphitryon promised to avenge the murder of her brothers at the hands of the Teleboans. Amphitryon was to consummate his marriage to Alkmene when he completed his promise but before he could return, Zeus came to Alkmene in the guise of Amphitryon and seduced her; from Zeus she conceived Herakles and from Amphitryon she conceived Iphikles. See Alkmene by itself with citation tips (best for bookmarking). Alkyone (1) Alcyone One of the seven daughters of Atlas known as the Pleiades. The name Alkyone literally means Sea-Bird. The online encyclopedia of writing systems and languages. 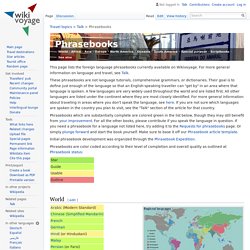 For more general information on language and travel, see Talk. These phrasebooks are not language tutorials, comprehensive grammars, or dictionaries. Their goal is to define just enough of the language so that an English-speaking traveller can "get by" in an area where that language is spoken. A few languages are very widely used throughout the world and are listed first.

All other languages are listed under the continent where they are most closely identified. Phrasebooks which are substantially complete are colored green in the list below, though they may still benefit from your improvement. Initial phrasebook development was organized through the Phrasebook Expedition. 5 Best Ways to Introduce New Vocabulary.

Feature: June 2015 — EthnoMed. Anglais. How To Read Effectively In A Foreign Language. If you’re learning a foreign language, and you don’t read regularly… You should be. 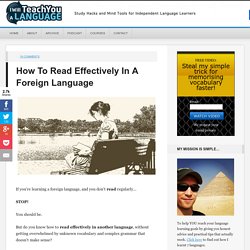 But do you know how to read effectively in another language, without getting overwhelmed by unknown vocabulary and complex grammar that doesn’t make sense? In this article you’ll learn how to use reading to quickly learn new words and boost your fluency in your target language, even if you’re just getting started, and even if you’ve tried and failed before. Let’s get started. Why should you bother reading? You’ve probably heard before that reading helps you to learn language. But why? What are the benefits of learning a language with stories, as opposed to with a textbook? Understanding what reading is, and why you would do it, is the first step to becoming an effective reader. The main benefit of reading is that you gain exposure to good quality, natural language. If you read a lot (for pleasure or study), this is commonly known as extensive reading.

This is known as intensive reading. So what’s the catch? Easy Way Language Centre's map reveals how words have evolved across the continents. The map was created by Brazil-based Easy Way Language Centre and shows the official languages of countriesType a word in any language into Word Map to hear it being translated globally in these official languagesAs the words are mapped globally, lines connect all the countries with a common languageThese lines in turn reveal how language has spread with migration and colonisation Clicking a word reveals more about that particular language, and how many countries share the translation By Victoria Woollaston for MailOnline Published: 10:29 GMT, 30 January 2015 | Updated: 12:51 GMT, 30 January 2015 There are said to be around 6,500 spoken languages around the world. 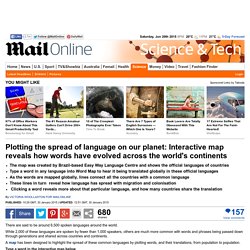 While 2,000 of these languages are spoken by fewer than 1,000 speakers, others are much more common with words and phrases being passed down through generations and shared across countries and continents. Type a word in the interactive map below To use the map, type any word in any language into the search box and press Map It. 400 Language.