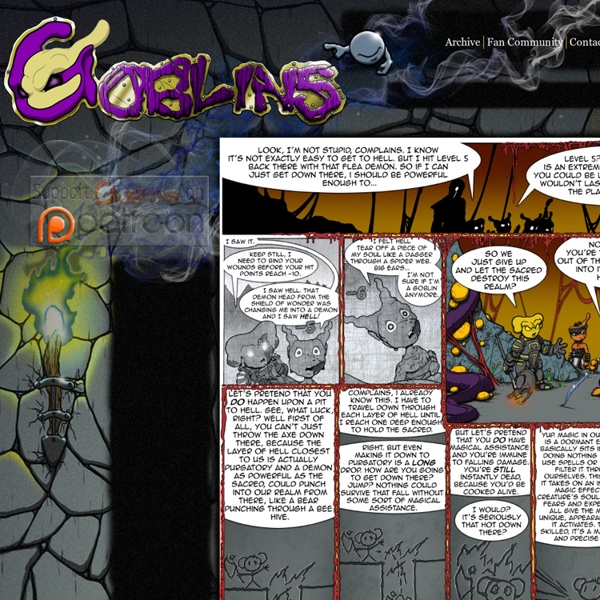 This Is Not The Blog. February 26th, 2014 Very soon there will be a blog post from Tarol Hunt (Thunt), explaining what’s happened and what’s going on with the Goblins updates. This is not that blog. -Danielle Drawing Live Right Now

What a great guy July 8, 2014 It's that time of year again! Volume 6 is up for pre-order! Only difference this year is that we're using Kickstarter to fund the printing. What's New with Phil & Dixie Online Comics Welcome! The comics you'll find here were written and drawn in the 1980's and 1990's. They appeared in Dragon magazine: TSR's Dungeons & Dragons publication. So yes, they're all about RPGs and the gamers who love them. What's New collections on paper can be had from your local book or comic store, Amazon.com or our Studio Foglio Online Company Store.

Webcomics My first webcomic launched with this site in 1998. From 1998 to 2004, I regularly posted new comics in various experimental formats, occasionally getting into long online debates about whether this-or-that format was a step toward the future of comics or just a gimmicky dead-end. Most of the comics in this section play with the idea of treating the screen as a window rather than a page (the so-called "infinite canvas" style, most often associated with my book Reinventing Comics).

PHD Comics Coming Soon - Stay tuned for a BIG announcement about an awesome project Jorge is working on! PHD Store - Our store was down for a while, but now it is back! Free excerpt from The PHD Movie 2! - Watch this free clip from the movie that Nature called "Astute, funny"! Watch the new movie! - The PHD Movie 2 screenings are in full swing! I write for myself and I'll say anything I damn well please Transcripts follow. (Source: Dexter; Image above, via NME.) Transcript December 2, 1996 Green Day P.O. Wayward Sons: Legends - Sci-Fi Full Page Webcomic - Updates Daily New Adventures WithOccasional Updates Written, Lettered & Createdby Benny R. PowellPencil Artwork by Weilin YangFinishes by Youjun YangColors by Kun Song <a href=" the discussion thread. The Adventures of Boschen and Nesuko Chapter 1: Killing the Dead Chapter 2: The Perfume Stinks Chapter 3: Introducing Oneself to a Beautiful Topless Woman Chapter 4: Some Space