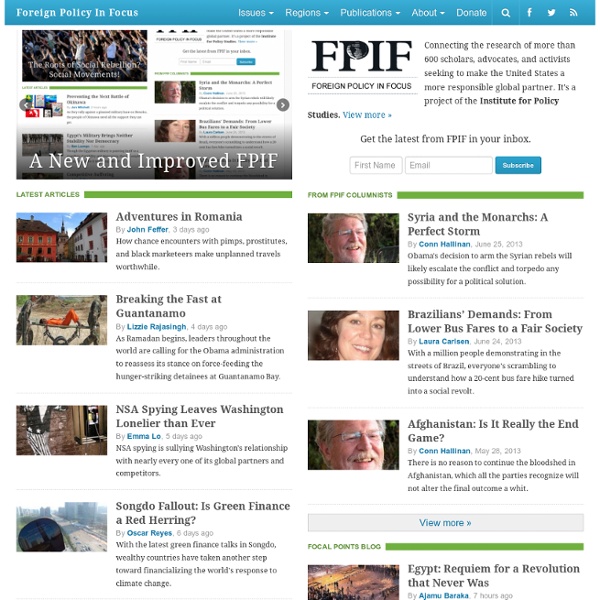 Europe - Robert Schuman Foundation - The french think tank on Europe Historical Collection Publications The Historical Review Program, part of the CIA Information Management Services, identifies, collects and produces historically relevant collections of declassified documents. These collections, centered on a theme or event and with supporting analysis, essays, video, audio, and photographs, are showcased in a booklet and DVD that are available to the academic realm and the public. Intelligence Community History International Relations

Center for American Progress IRC's History The Spy Who Billed Me Seymour Hersh was likely counting on his reputation cutting through any obstacles that could prevent him from pulling off what is probably the last “blockbuster” of his career. And he did meet an obstacle: He is pretending to break a broken story—and he knows it. Tuesday evening on Democracy Now! Centre for Research on Globalization Dedefensa.org : Accueil 10 Groups That Don’t Flinch Under Fire (And, Thus, Deserve Your Support) Here at CounterPunch we get lots of calls from readers this time of year asking: where are the good groups? Where can I send a year-end check and know that the money will be well spent, not recycled into a fat executive salary or an annoying direct mail campaign? There are many such groups out there; indeed, there is a vibrant and thriving grassroots movement across a whole range of issues.

Online Articles Parties recover from defeat in two ways. They can try to beat the opposition at their own game, or they can try to change the rules of the game. Donald Trump did the latter. Now it’s the Democrats’ turn. Kate and Daniel try to wrap their heads around climate politics in the age of Trump, and how movements can step up to defeat his extremist agenda. Well, China’s Aircraft Carrier Is Up to Something Interesting by DAVE MAJUMDAR In January 2017, China’s sole carrier Liaoning is operating in the South China Sea with a full-complement of aircraft along with five escorting vessels for the first time. The vessels have been conducting exercises and testing weaponry at sea in a display of Beijing’s growing military might — causing concern among China’s neighbors. “The formation, which is on a ‘cross-sea area’ training exercise, involved J-15 fighter jets, as well as several ship-borne helicopters,” the Chinese Defense Ministry stated on its website. “Complex hydrological and meteorological conditions in the South China Sea as well as a cold front in area have posed some challenges, but the source said the drill provided important experience in the build-up of combat capability of the aircraft carrier formation.” Video footage from the Chinese exercises look impressive, though such footage always does.