Tragedy and Hope Communications — T&H: Your Launchpad for Learning 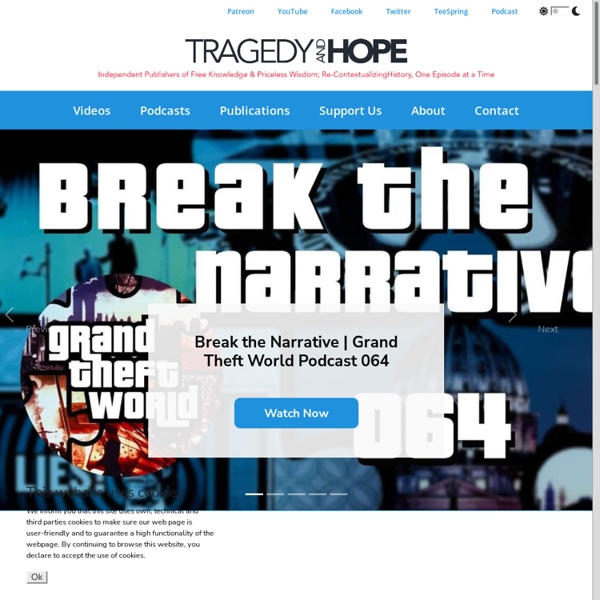 The Peace Revolution Podcast Home - Gnostic Media Want to know the truth? Verifiable information on banking, health, energy, media, war, elections, 9/11, more What is Religion? Definitions and Quotes 25.2KGoogle + What is the Definition of Religion? The question is not easy to answer. As St. Augustine said of time, most of us know perfectly well what religion is - until someone asks us to define it. The groups, practices and systems that people identify as "religions" are so diverse that it is no easy task to bring them all under one simple definition. "Religion: A general term used... to designate all concepts concerning the belief in god(s) and goddess(es) as well as other spiritual beings or transcendental ultimate concerns." ~ Penguin Dictionary of Religions (1997). "Religion: Relation of human beings to God or the gods or to whatever they consider sacred or, in some cases, merely supernatural." ~ Britannica Concise Encyclopedia (online, 2006) "Religion: Human beings' relation to that which they regard as holy, sacred, spiritual, or divine." ~ Encyclopædia Britannica (online, 2006) "Religion is what the individual does with his own solitariness." ~ A.N. "Religion is all bunk

If It Were My Home Truth in American Education Global Research - Centre for Research on Globalization Hierarchy of Needs What motivates behavior? According to humanist psychologist Abraham Maslow, our actions are motivated in order achieve certain needs. Maslow first introduced his concept of a hierarchy of needs in his 1943 paper "A Theory of Human Motivation" and his subsequent book Motivation and Personality. This hierarchy suggests that people are motivated to fulfill basic needs before moving on to other, more advanced needs. This hierarchy is most often displayed as a pyramid. The lowest levels of the pyramid are made up of the most basic needs, while the more complex needs are located at the top of the pyramid. As people progress up the pyramid, needs become increasingly psychological and social. Types of Needs Abraham Maslow believed that these needs are similar to instincts and play a major role in motivating behavior. Maslow termed the highest-level of the pyramid as growth needs (also known as being needs or B-needs). Five Levels of the Hierarchy of Needs Criticisms of Maslow’s Hierarchy of Needs