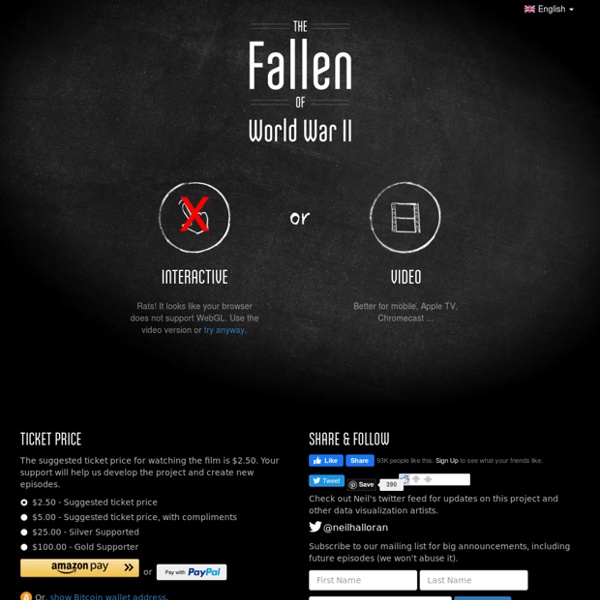 Related:  WWII • Data-driven history / DigHum • Visualization • 2de GM • Those in and out of the War Zone

Lesson Plans: Dr. Seuss Dr. Seuss & WWII: Analyzing Political Cartoons Dr. Seuss is the beloved author of more than 50 children’s books. Mapping America's Changing Political Conversation Researchers used computational techniques to map recurring words and their relation to each other across 224-years of State of the Union remarks. Viewed as a network, the words point to common themes and disruptions in political discourse. (Courtesy of the authors) No historical record may capture the nation’s changing political consciousness better than the president’s State of the Union address, delivered each year except one since 1790.

This 1-minute animation will change your perception of life in the Universe If extraterrestrial life is anything like what we see on Earth, then chances are it's living on Earth-like planets thousands, or even millions, of light-years from our Solar System. Today, astronomers have detected over 1,700 extra-solar planets, or exoplanets, with NASA's Kepler Space Telescope. While it's hard to visualise so many planets, a second-year astronomy graduate student at the University of Washington, Ethan Kruse, has found a way that is both mesmerising and oddly humbling. Check out his animation above, where every circle you see is a planet. (Our Solar System is on the far right.)

Where the Bodies Are Buried - The New Yorker Jean McConville had just taken a bath when the intruders knocked on the door. A small woman with a guarded smile, she was, at thirty-seven, a mother of ten. She was also a widow: her husband, Arthur, had died eleven months earlier, of cancer. Anne Frank and her family were also denied entry as refugees to the U.S. Portrait of Anne Frank at age 12, sitting at her desk at the Montessori school in Amsterdam. (Courtesy Anne Frank House, Amsterdam) Many have noted the historical parallels between the current debate over Syrians seeking refuge in the United States and the plight of European Jews fleeing German-occupied territories on the eve of World War II. Among the many who tried — and failed — to escape Nazi persecution: Otto Frank and his family, which included wife, Edith, and his daughters, Margot and Anne. And while the story of the family's desperate attempts ending in futility may seem remarkable today, it's emblematic of what a number of other Jews fleeing German-occupied territories experienced, American University history professor Richard Breitman wrote in 2007 upon the discovery of documents chronicling the Franks' struggle to get U.S. visas. world

Big-Data Project on 1918 Flu Reflects Key Role of Humanists A deadly virus arrives in America, carried by travelers from abroad. Health officials scramble to contain the threat, imposing quarantines and other strict measures even as they seek to reassure the public. It sounds like the Ebola outbreak of 2014. But this scenario played out almost a hundred years ago, during the Spanish-influenza pandemic of 1918. Now a team of humanists and computer scientists has combined early-20th-century primary sources and 21st-century big-data analysis to better understand how America responded to the viral threat in 1918. It’s a study in the possibilities as well as the pitfalls of interdisciplinary work, and a model-in-progress for how data-driven analysis and close reading can enhance each other.

This is what the entire known Universe looks like in a single image Isn’t it beautiful? This is an illustrated logarithmic scale conception of the observable Universe with the Solar System at the centre. Encircling the Solar System are the inner and outer planets, Kuiper belt, Oort cloud, Alpha Centauri star, Perseus Arm, Milky Way galaxy, Andromeda galaxy, other nearby galaxies, the cosmic web, cosmic microwave radiation, and invisible plasma produced by the Big Bang at the very edges. See below for uncropped and zoomable versions.

The Rise of the Child Terrorist On January 15, a video surfaced on the Internet that depicted a 10-year-old Kazakh boy using a gun to execute two Russian members of the Islamic State of Iraq and al-Sham (ISIS) who had been accused of being spies. ISIS claimed ownership of the video, although it has not yet been authenticated. Only a few days earlier, twin suicide bombings rocked northern Nigeria, involving three girls, who appeared to have been only 10 years old, all wearing explosives that may have been remotely detonated by members of Boko Haram. A year before, a nine-year-old girl named Spozhmai, who is the sibling of an Afghan Taliban commander, was detained at a border checkpoint in Kandahar.

Winston Churchill's Their Finest Hour Speech I spoke the other day of the colossal military disaster which occurred when the French High Command failed to withdraw the northern Armies from Belgium at the moment when they knew that the French front was decisively broken at Sedan and on the Meuse. This delay entailed the loss of fifteen or sixteen French divisions and threw out of action for the critical period the whole of the British Expeditionary Force. Our Army and 120,000 French troops were indeed rescued by the British Navy from Dunkirk but only with the loss of their cannon, vehicles and modern equipment. This loss inevitably took some weeks to repair, and in the first two of those weeks the battle in France has been lost. Writing History in the Digital Age » Writing History by the Numbers (Haber) Fall 2011 Writing History by the Numbers: A New Historiographic Approach for the 21st Century? by Peter Haber Since the so-called linguistic turn in the 1980s, the mainstream of Western historiography has focused with a preference to textual and more recently to visual sources (pictorial turn). The favorite methodical approaches to history of recent decades were cultural history, discourse analysis, oral history, and history of mentality. Social history and other quantifying historical approaches were mostly overlooked. But with the new possibilities of digital networks hitherto neglected methods could suddenly awaken new interest in the historical community (and beyond).

The Gatekeepers The Gatekeepers By Simon Wood "One of the questions asked in that study was, How many Vietnamese casualties would you estimate that there were during the Vietnam war? The average response on the part of Americans today is about 100,000. The official figure is about two million. The actual figure is probably three to four million.