Cute, clever and quite bitter 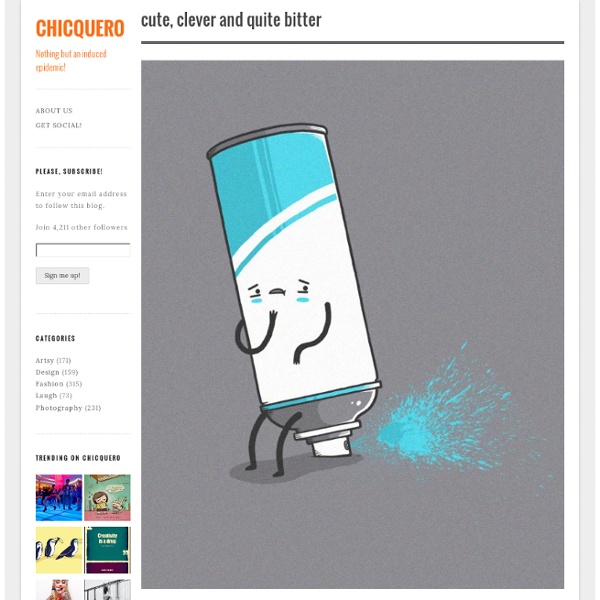 Pixar Animator Recaps The NFL Season In The Best Way Possible [Art Like a huge chunk of America, I am fairly depressed that the football season is over. Austin Madison, an animator at Pixar and occasional comic book cover artist, is also in mourning, but found a pretty impressive and imaginative way to look back on the year. Madison has created more than 20 images that each recap the result of a different NFL game this season, incorporating clever plays on team names and mascots. Sketchbook Secrets: 50 Beautiful Sketchbook Scans The sketchbook is—to borrow a term from the new millenniums’ popular discourse—an artist’s BFF. It’s a diary for the visually inclined—a place where artists can most comfortably explore their personal thoughts, work out their visual needs, practice, maintain a visual history, and hopefully create the unpolished work that will eventually lead to amazing work for the world to see. But, sometimes, when we’re lucky, we get to see the process.

Wonderful Lord of the Rings Art That Goes On And On SExpand Have some more. There's always a lot of talk on the net about how WoW is trash, or Blizzard ruined Warcraft, or this or that or blah blah blah, but at the end of the day, they still put a huge amount of love in to their stories. He also did an absolutely stunning and exact rendition of the story that Blizzard created for the first Pandaren emperor in Mists, the most recent expansion. It's a very neat tale called the Six Burdens of Shaohao. Have some more!

15 Female Illustrators We Have A Crush On There may be statistical correlation between hotness and talent when it comes to female illustrators, guys. Not only are these the top ladies in the illustration game, they're crush-worthy and so talented that they're arguably wifey material. In the past, we've brought you Female Photographers, Female Tattoo Artists, and Female Artists who we have crushes on, but now you get female illustrators, and it might be one of our best lists yet. 15 Female Illustrators We Have A Crush On Mark Jenkins // Glazed Paradise Besançon Rome Rio de Janeiro Tudela London Dublin

25 Mind-Blowing Fantasy Dragon Wallpapers Dragons are amazing fantasy creatures. Digital arts goes to a complete new level when an artist depicts how a dragon looks like. However, 80% of the time artists depict the dragon as a merciless, ruthless creature – who is hell bent on destroying the human race. But it is the amount of details put into the artwork that makes it so fascinating! Check the artworks shown above, and you will see what I mean. Chinese Manga Fan Creates Striking Perspective Art Where He's The Star Gaikuo-Captain, a student at Beijing Chemical Engineering University, originally just wanted to make a profile photo for himself and somehow ended up with stuff like the following photos below. He is definitely a manga and anime fan to say the least. He created a set of 21 images, posted them on the internet, and earned 10,000 views in one day. I think this Sai drawing is just so perfectly capturing how it would look if it was real! In an interview by a local newspaper, he said those characters he used in his art are the ones he dearly loves, that he considers them as a part of his life. He said it brought back many memories while working on them.

Awesome Illustrations by Nacho Diaz Some beautiful and creative illustrations by talented artist Nacho Diaz ↑ Back to top Illustration inspiration In From up North’s inspiration galleries we present the latest of our findings from the wonderful world of design. Amazing high quality artworks in various categories from great designers all over the globe. Jennifer James – Submitted by Spiro Stark, Minimal Batman Villains By Eduardo Cortes Trujillo Artist Eduardo Cortes Trujillo’s just completed this minimalist series of the Bats’ most famous villains. Using solid, black backgrounds and their most iconic colors and shapes, he’s captured each villain in their best light. It’s a testament to each foe’s timeless character design and unique persona. via EDIT: Keep checking back on Trujillo’s blog, as already done Bats and Alfred.

carnovsky ex For info and pricing please contact: carnovsky@carnovsky.com Download Pdf catalog of RGB BLACK wallpapers (12 Mb) The Nature of Ambition az said... well, that's so true. Soemtimes though, it's not due to ambition. PAPERFASHION Chris Benz SS11 Every season, without fail, Chris Benz sends my favorite looks to illustrate down the runway! He’s consistent with his color pops… and his quirky designs. If you haven’t looked at this show… check it out.