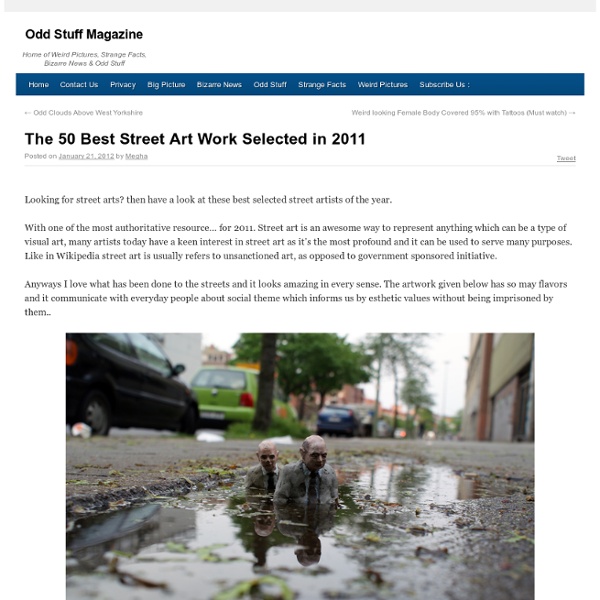 Looking for street arts? then have a look at these best selected street artists of the year. With one of the most authoritative resource… for 2011. Street art is an awesome way to represent anything which can be a type of visual art, many artists today have a keen interest in street art as it’s the most profound and it can be used to serve many purposes. Anyways I love what has been done to the streets and it looks amazing in every sense. [ad700] [ad1] [ad2] Ads by Google

All-in-One Modular Fold Out Living Room Furniture Set | Designs &Ideas on Dornob - StumbleUpon This incredible all-in-one furniture set from Matroshka is still looking for funding – so if you want to have one you might need to become an investor. Named after Russian nesting dolls, this remarkable furniture collection packs down to just 13 square feet but includes: bookshelves, a double bed, corner couch, dinner table, four stools, working space, drawers, a wardrobe and additional storage. Whether or not these are ever mass-produced this great step-by-step furniture photo shoot should at least inspire do-it-yourselfers to think about how you can create your own highly portable and yet remarkably simple modular furniture sets to suit your own spatial needs:

Experimental General Motors tech brings car windows to life Backseat boredom could become a thing of the past if experimental interactive glass technology finds its way into General Motors cars. Currently in the prototype stage, a student project commissioned by GM envisages using smart glass technology to help rear seat passengers, particularly children, have a richer experience on the road. Inspired by psychological studies that indicate car passengers often feel disconnected from their environment, GM asked students from the Bezalel Academy of Art and Design in Israel, to turn car windows into interactive displays. The range of games and apps created for this ‘Windows of Opportunity’ project included: Otto, an animated character projected over passing scenery that responds to real-time car performance, weather and landscape. In order to demonstrate these apps, the Israeli students produced a full-scale functional prototype of a rear passenger seat and side window. Below is a video showing the car window technology at work:

21 Images You Won't Believe Aren't Photoshopped (Part 8) This is the latest edition of our most popular feature, in which we demonstrate that the truth is stranger than Photoshop. Here are more photos that will make every poster in the comment section scream "FAKE!" but are absolutely real. In case you missed the previous episodes, here's Part 1, Part 2, Part 3, Part 4, Part 5, the gritty reboot that doesn't acknowledge the previous editions, Part 6 and Part 7. And now ... #21. Via Buzzhunt.co.uk This looks like a bank of escalators seconds before they were buried under a lava flow, but it's actually one of about a hundred decorated subway stations under Stockholm, Sweden, where the natural bedrock ceiling has been painted. If nothing else, it has to make it a hell of a lot easier to figure out if you're at the right stop. Via Wikimedia Commons"Hmmm ... this has less magma than I remember." #20. Via Forbes Yes, that's a satellite photo, and yes, there really is a gigantic set of connecting canals spelling "HAMAD" in Abu Dhabi. #19. Via Making Of

Dark Side of Oz Dark Side of Oz [Setup] [Similarities with Pictures] [Similarities] [Conclusion] [Pink Floyd Lyrics] I've done this experiment quite a few times, and I'll have to admit that there are a lot of coincidental events and themes. Although Pink Floyd has never admitted to doing such a thing (except Roger, who stays quiet when asked), there are just a few points that should be examined. Click here for the Wizard of Oz Poster ~ Over The Rainbow Trippy inspiration for Pink Floyd Dark Side of the Moon ~ 24x36" Breathe Dorthy is on Earth, and everyone is talking to her, but this what are they really saying? Released March, 1973 "Speak to Me" (Mason) "I've been mad for fucking years, absolutely years, been over the edge for yonks, been working me buns off for bands..." "I've always been mad, I know I've been mad, like the most of us...very hard to explain why you're mad, even if you're not mad..." (Instrumental) "Breathe" (Waters, Gilmour, Wright) Breathe, breathe in the air. Run, rabbit run.

Glamour doll the glamour doll :archivemessagehai mine hi im nadia and im actually a 40 year old man xoxo Older theme Mountains of Books Become Mountains - StumbleUpon I thought I’d seen every type of book carving imaginable, until I ran across these jaw dropping creations by Guy Laramee. His works are so sculptural, so movingly natural in their form, they’ve really touched me. His works are inspired by a fascination with so-called progress in society: a thinking which says the book is dead, libraries are obsolete and technology is the only way of the future. His thoughts: “One might say: so what? Do we really believe that “new technologies” will change anything concerning our existential dilemma, our human condition? See Also INCREDIBLE 3D ILLUSTRATIONS JUMP OUT OF THE SKETCHBOOK Carving into the discarded stacks of books, he has created fantastic, romantic landscapes which remind us that though our fascinations and the value we put on different ideas have changed, we as a species have not evolved that much. “Mountains of disused knowledge return to what they really are: mountains. See more of his beautifully meditative works at guylaramee.com.

When a photograph is not just a photograph !! www.cognifit.com/my-cognifit 30 Supercharged Free Photoshop PSD Files for Web Designers and Developers Free PSD files are the friend of all designers, as they can save time for seasoned designers who need a lightbox, pagination, social media icons or other elements to use in their designs, and they are useful learning resources for beginning designers who want to see how to design such elements for themselves. Web developers can benefit as well, by using them to test individual effects such as jQuery sliders and jQuery toolips without having to design their own site. In this post, you’ll find 30 supercharged free Photoshop PSD files for web designers, developers and anyone else who wants to use them, that will boost your productivity and even make you a better designer. Need more free Photoshop resources? Happy designing! Stitched Fabric Horizontal Accordion 404 Error Template Clean Simple Image Slider PSD Under Construction PSD Awesome Pop Up Design PSD Simple Image Preview Tooltip PSD Web Elements Pack PSD 14 Free Custom Web Navigation PSD Download Bar Template Clean Quick Search Pack

RELIC National Geographic Photo Contest 2011 - Alan Taylor - In Focus - The Atlantic - StumbleUpon National Geographic is currently holding its annual photo contest, with the deadline for submissions coming up on November 30. For the past nine weeks, the society has been gathering and presenting galleries of submissions, encouraging readers to vote for them as well. National Geographic was kind enough to let me choose among its entries from 2011 for display here on In Focus. Use j/k keys or ←/→ to navigate Choose: Many people pilgrimage to Uluru, but what is seen there often depends on where you've come from. Eruption of the Cordon del Caulle. Beluga whales in the arctic having fun. This is a streetcar in New Orleans traveling back towards The Quarter on St. This image captures almost 6 hours of climbing parties on Rainier going for the summit under starry skies. Russia, polar region of West Siberia, Tazovsky Peninsula. An adult male gelada rests in the early morning light after ascending the steep sleeping cliffs of the Simien Mountains, Ethiopia. This place is very special to me.