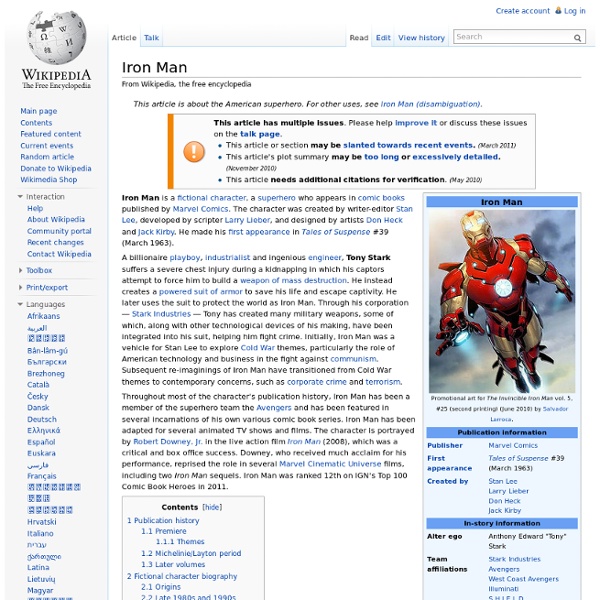 Iron Man is a fictional character, a superhero that appears in comic books published by Marvel Comics. The character was created by writer-editor Stan Lee, developed by scripter Larry Lieber, and designed by artists Don Heck and Jack Kirby. He made his first appearance in Tales of Suspense #39 (March 1963). Publication history[edit] Premiere[edit] Iron Man's Marvel Comics premiere in Tales of Suspense #39 was a collaboration among editor and story-plotter Stan Lee, scripter Larry Lieber, story-artist Don Heck, and cover-artist and character-designer Jack Kirby.[2] In 1963, Lee had been toying with the idea of a businessman superhero.[3] He wanted to create the "quintessential capitalist", a character that would go against the spirit of the times and Marvel's readership.[4] Lee said, I think I gave myself a dare. In his premiere, Iron Man was an anti-communist hero, defeating various Vietnamese agents. Themes[edit] First series[edit] Later volumes[edit]

Biography Punisher The Punisher is a fictional character, an antihero that appears in comic books published by Marvel Comics. The character was created by writer Gerry Conway and artists John Romita, Sr., and Ross Andru, with publisher Stan Lee providing the name. The Punisher made his first appearance in The Amazing Spider-Man #129 (cover-dated Feb. 1974). Publication history[edit] First appearance[edit] The Punisher was conceived of by Gerry Conway, writer of The Amazing Spider-Man, who helped design the character's distinctive costume. Stan Lee, then Marvel's editor-in-chief, recalled in 2005 that he had suggested the character's name: Initial series[edit] In the early 1980s, artist Mike Zeck and writer Steven Grant proposed creating a Punisher series. Decline[edit] In 1995, Marvel canceled all three ongoing Punisher series due to poor sales. Revivals[edit] MAX imprint[edit] Promotional art for Punisher vol. 6, #44 (March 2007), by Tim Bradstreet.

Forging the Iron Man Elektra (comics) bandied about the idea [of bringing back Elektra] in a casual fashion now and again, but neither of us wanted to do it as a gimmick. On the rare occasion I thought I had a legitimate angle to use her, Ralph was cool to the idea. But as we geared up for what would become Fall From Grace, Ralph out of the blue said, "What about bringing back Elektra?" -- and it was really the missing piece that clicked together all the loose pieces of the story in my head, and became the nexus for everything tying together as well as it did. In my mind, it's always been her to whom the title refers.[6] This upset Frank Miller, who claimed that Marvel had previously promised him that the character would not be used in any publication.[7] She has since appeared in two eponymous ongoing series and several mini-series. Elektra was born on a Greek island near the Aegean Sea to Hugo Kostas Natchios and his wife Christina Natchios. Two contradictory accounts of her family history have been given.

A Heavy Burden Ms. Marvel Carol Danvers[edit] Sharon Ventura[edit] Karla Sofen[edit] Kamala Khan[edit] Kamala Khan, created by Sana Amanat, G. References[edit] Wolverine (comics) Marvel editor-in-chief Roy Thomas asked writer Len Wein to devise a character specifically named Wolverine, who is Canadian and of small stature and with a wolverine's fierce temper. John Romita, Sr. designed the first Wolverine costume, and believes he introduced the retractible claws, saying, "When I make a design, I want it to be practical and functional. I thought, 'If a man has claws like that, how does he scratch his nose or tie his shoelaces?'"[10] Wolverine first appeared in the final "teaser" panel of The Incredible Hulk #180 (cover-dated Oct.1974) written by Wein and penciled by Herb Trimpe. The character then appeared in a number of advertisements in various Marvel Comics publications before making his first major appearance in The Incredible Hulk #181 (Nov. 1974) again by the Wein-Trimpe team. The character's introduction was ambiguous, revealing little beyond his being a superhuman agent of the Canadian government. Wolverine first uses his claws in Origin #2.

Hulk (comics) The Hulk first appeared in The Incredible Hulk #1 (cover dated May 1962), written by writer-editor Stan Lee, penciled and co-plotted by Jack Kirby,[6] and inked by Paul Reinman. Lee cites influence from Frankenstein[7] and Dr. Jekyll and Mr. Hyde in the Hulk's creation: Lee also compared Hulk to the Golem of Jewish myth.[7] In The Science of Superheroes, Gresh and Weinberg see the Hulk as a reaction to the Cold War[9] and the threat of nuclear attack, an interpretation shared by Weinstein in Up, Up and Oy Vey.[7] This interpretation corresponds well when taken into account alongside other popularized fictional media created during this time period, which took advantage of the prevailing sense among Americans that nuclear power could produce monsters and mutants.[10] Arie Kaplan calls Hulk "schizophrenic Lee gave the Hulk's alter ego the alliterative name Bruce Banner because he found he had less difficulty remembering alliterative names.

Jean Grey In 2006, IGN rated Jean Grey #6 on their list of Top 25 X-Men from the past forty years,[1] and in 2011, IGN ranked her 13th in the Top 100 Comic Book Heroes.[citation needed] Conversely, her Dark Phoenix persona was ranked 9th in IGN's "Top 100 Comic Book Villains of All Time" list.[2] She was ranked third in Comics Buyer's Guide's 100 Sexiest Women in Comics list.[3] Publication history[edit] Debut (1960s)[edit] "The Phoenix Saga" and "The Dark Phoenix Saga" (1976-1980)[edit] In an attempt to save her fellow X-Men by piloting their damaged shuttle back to earth, Jean was exposed to fatal levels of radiation. This new identity and immense abilities eventually resulted in Jean becoming overwhelmed and corrupted by her god-like powers after a failed attempt by the villainous group called the Hellfire Club to control her mind. Return to publication (1986)[edit] Return to the X-Men (1990s)[edit]

Spider-Man When Spider-Man first appeared in the early 1960s, teenagers in superhero comic books were usually relegated to the role of sidekick to the protagonist. The Spider-Man series broke ground by featuring Peter Parker, the high school student behind Spider-Man's secret identity and with whose "self-obsessions with rejection, inadequacy, and loneliness" young readers could relate.[4] Unlike previous teen heroes such as Bucky and Robin, Spider-Man had no superhero mentor like Captain America and Batman; he thus had to learn for himself that "with great power there must also come great responsibility"—a line included in a text box in the final panel of the first Spider-Man story but later retroactively attributed to his guardian, the late Uncle Ben. Publication history Creation and development Regardless, Lee received Goodman's approval for the name Spider-Man and the "ordinary teen" concept, and approached artist Jack Kirby. One of the first things I did was to work up a costume.