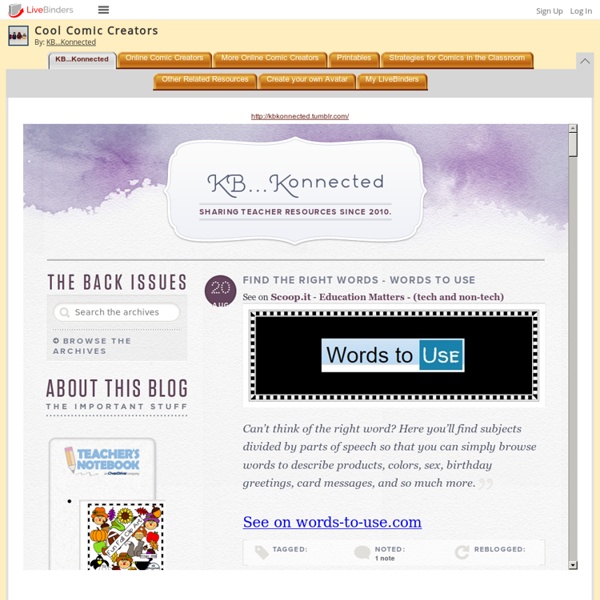 26 Ways to Use Comics in the Classroom and 5 Free Tools for Creating Comics One of the most popular posts that I've published on Free Technology for Teachers is a list of ten free tools for creating comics online. I wrote that post three years ago. Since then some of the tools have gone offline or started charging users. So I think it's time to share a new list. Comic Master is a free tool designed for students to use to create comics in the "graphic novel style" that is popular with a lot of kids in the ten to fourteen years old age range. Make Beliefs is a free comic strip creation tool that provides students with a variety of templates, characters, and prompts for building their own comic strips. Chogger is a free comic strip creation tool that offers a good selection of editing tools. Marvel Kids invites kids to create their own super hero comic strips and comic books. Witty Comics provides a simple platform that students can use to create two character dialogues.

Educational Software | Teaching with Comics | Bitstrips for Schools Make a Comic with Comics Head I first reviewed Comics Head in 2013. It’s a website and also an app our children can create a comic with. When I learnt that the latest update to the Comics Head app for iPad, version 3, had major new features, I decided to investigate. From the developer: - Unlimited Editable comics - 3500+ Themed Art Assets (Beach, Fruits, Vegetables, Kitchen, Zodiac symbols and more...) - A lot more templates. What I liked: I LOVE to find ways for kids to tell stories. I’ll show you what I mean: When I took the latest version of the app for a test drive, I kept bumping into features I could see would be valuable in an educational context. In image 2, I chose a background for my cat and dog characters. In image 3, I decided to try the paint feature and “drew” a flower in a pot as an added prop. In image 4, I took the iPad camera outside and grabbed an image from my garden as a new background. I also tested the audio and video functions. Do I sound enthusiastic? Full version:

digthelibrary Howtoons WriteComics.com - Create your own comics! Using Comics for Information Reports Using Comics for Information Reports When is a comic not a comic? When it’s an information report! Comics have had bad press, little of it deserved in my opinion. If you’re a long-time reader of The Book Chook, you’re probably aware of the fact I think comics are a great way to lure reluctant readers and writers into trying reading and writing. Here are some ideas on how to use that comic style (images and captions/speech bubbles) to present information. *Children for whom writing is a chore may find telling a story with captions or speech bubbles much more achievable. *When you’re looking for a way to give feedback to your local or school community on a special day or an excursion, the comic format is a succinct way to communicate with images and words. *With younger children, a collaborative creation of a report works well. *Kids are motivated to report on books they’ve read when they use a combination of images and words in the comic format. Kids can create comics with apps, too.

iLearn Technology DigitalStorytelling4Kids [licensed for non-commercial use only] / Week2 Week 2: Sharing Stories through Comics During this week, participants will become familiar with web tools to create comics with young learners.learn how to create comic stories with these tools.reflect on the use of comics in the classroomexplore ways to integrate comics in their classroom in ways that improve reading and writing skills of learnersdiscover mobile apps for creating comicscreate a comic using one of the tools from this week Task 1, Day 1: How can we use comics in storytelling with young learners? Comics and cartoons compress stories into a just a few frames. Look at Janet Bianchini's RSCON3 presentation, Fun ways to exploit comics and cartoons in the classroom. Select one of the ideas that appeals to you and share it in our DigiKids EVO Edmodo Group. Visit the sandbox and begin playing around with some of the comic generator tools. Task 2, Day 2: Exploring ways teachers have integrated comics into lessons a. Jennifer taught a course for teachers about technology tools. b. a.

CRAZY TEACHER LADY PowToon is a tool that I've known about for a long time. However, in searching for an easy-to-use tool to demonstrate to teachers for student use in their 1:1 classrooms, I rediscovered it amongst all of my pins on my presentation tools pinboard. PowToon claims to bring awesomeness to your presentations, and I would be inclined to agree. Below is an example of a presentation about digital storytelling that was made with PowToon: Here's a rundown of the major features of PowToon: 1. To add all sorts of awesomeness to your presentation, you just select a theme from the top right and then select what objects you want to include from a range of choices. 2. After selecting a category, you can then choose from one of several templates already made for that category. After selecting a template, you can edit it to your heart's desire. 3. 4. 5. If you want to change the entrance or exit of an object, just drag the vertical blue lines on either side of the blue bar.

For Educators | 21 Ways to Use MakeBeliefsComix.com in the Classroom How to Play with MakeBeliefsComix.com How to Play: For Educators Click here to watch a video of students at City College, New York, talking about how MakeBeliefsComix.com helps them learn English. Their instructor, Tamara Kirson, was named The New York Times 2009 ESOL Teacher of the Year. To see her lesson plan click here. By Bill Zimmerman, Creator, MakeBeliefsComix.com Download "WAYS TO USE MAKEBELIEFSCOMIX IN THE CLASSROOM" and print it out! 1. At the beginning of each new school year have students create an autobiographical comic strip talking about themselves and their families or summarizing the most important things about their lives. 2. Have students create a comic strip story using new vocabulary words that are being taught. 3. Have students break up into pairs or group teams to create their comic strips together. 4. 5. 6. Have students who are learning new foreign languages write their text in languages they are studying. 7. 8. 9. 10. 11. 12. 13. 14. 15. 16. 17. 18. 19. 20. 21.