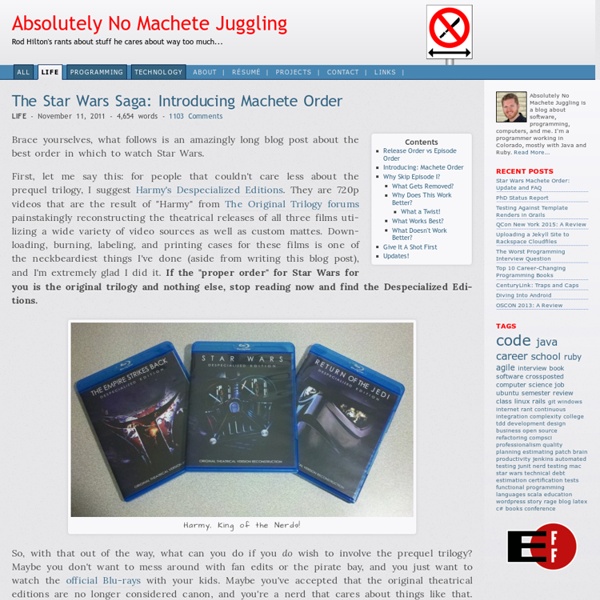 Brace your­selves, what follows is an amaz­ingly long blog post about the best order in which to watch Star Wars. First, let me say this: for people that couldn't care less about the prequel trilogy, I suggest Harmy's De­spe­cial­ized Edi­tions. They are 720p videos that are the result of "Harmy" from The Orig­i­nal Trilogy forums painstak­ingly re­con­struct­ing the the­atri­cal re­leases of all three films uti­liz­ing a wide variety of video sources as well as custom mattes. Down­load­ing, burning, la­bel­ing, and print­ing cases for these films is one of the neck­beardi­est things I've done (aside from writing this blog post), and I'm ex­tremely glad I did it. If the "proper order" for Star Wars for you is the orig­i­nal trilogy and nothing else, stop reading now and find the De­spe­cial­ized Edi­tions. So, with that out of the way, what can you do if you do wish to involve the prequel trilogy? There are two obvious options for watch­ing the Star Wars saga. What Gets Removed?

Ask Chris Special Edition: The Best Of 'Ask Chris' This week marks the 200th installment of ComicsAlliance’s weekly Ask Chris column, in which senior writer Chris Sims tackles reader questions that send him delving into comics history, the metaphors at the heart of his favorite characters that have developed over decades and, every now and then, straight up fan-fiction. To mark the occasion, we’ve gone back through the archives (and taken a quick poll of readers) to sort out the absolute best of the past 200 columns, covering topics like the secular humanism at the heart of Scooby-Doo, the complicated chronology of Super Mario Bros., the 75-year competition between Marvel and DC, and more. And Batman. So, so much Batman.

24/192 Music Downloads are Very Silly Indeed Also see Xiph.Org's new video, Digital Show & Tell, for detailed demonstrations of digital sampling in action on real equipment! Articles last month revealed that musician Neil Young and Apple's Steve Jobs discussed offering digital music downloads of 'uncompromised studio quality'. Much of the press and user commentary was particularly enthusiastic about the prospect of uncompressed 24 bit 192kHz downloads. 24/192 featured prominently in my own conversations with Mr. Young's group several months ago. Unfortunately, there is no point to distributing music in 24-bit/192kHz format. I Has a Sweet Potato 02:29 pm: I Has a Sweet Potato You know, a lot of times I write up random posts and then don't post them. But Best Beloved just called me, and I could not really explain why I was inarticulate about sweet potatoes, so I said I'd go ahead and post this. That way, she can read it at work and know just what kind of day it has been. (Short version, for those who do not feel like reading the whole post: ARRRRRRG. Fucking sweet potatoes.) The longer version, summarized in conversation form:

How to inkjet-print circuits at fraction of time and cost A single-sided wiring pattern for an Arduino microcontroller was printed on a transparent sheet of coated PET film (credit: Georgia Institute of Technology) A novel method to rapidly and cheaply 3D-print electrical circuits has been developed by researchers from Georgia Tech, the University of Tokyo, and Microsoft Research. For about $300 in equipment costs, anyone can produce working electrical circuits in the 60 seconds it takes to print them using commodity inkjet printers and off-the-shelf materials. Instant inkjet circuits The technique, called instant inkjet circuits, allows for printing arbitrary-shaped conductors onto rigid or flexible materials and could advance the prototyping skills of non-technical enthusiasts and novice hackers. Silver nanoparticle ink is injected into an empty cartridge and used in conjunction with an off-the-shelf inkjet printer to enable “instant inkjet circuit” prototyping (credit: Georgia Institute of Technology)

MAME 0.151 ROMs While I appreciate the noble intent of the uploader, 'historical value' (fair use) is probably not going to cut it here. Many of these games have trademarked characters that live on in modern incarnations; some of them are still being sold by their owners, wrapped in proprietary emulators; and many of these ROMs are 'bootlegs' and circumvent encryption and copy protection in direct violation of the DMCA. Further, many of these games are still in operation, in arcades, bus stations and amusement parks around the world. Downloaders need to be aware that they may be committing a crime in their jurisdiction if they download and / or redistribute these files, display the games in a public setting, use any trademarked assets (such as sprites) contained therein without explicit permission from the manufacturer, or even just play the game. Sorry to be a party-pooper, but it would suck even worse if an innocent downloader were to face legal penalties because they had the wrong impression.

Top 5 'Lost' Western Film Classics — WhatCulture.com Everyone loves a western surely? From John Wayne being an all American hero in John Ford’s early classics… to Jimmy Stewart as the ‘Naked Spur’… Late sixties revisionist years with Leone’s Dollars Trilogy, ‘Once Upon A Time in the West’ and Peckinpah’s ‘Wild Bunch’… and rebirth with Eastwood’s ‘Unforgiven’. So many timeless classics to wile away an afternoon or evening on the delights of DVD players. Around similar era’s are some ‘lost’ western classics that for one reason or another aren’t held in the same universal regard or even heard off. They’re usually met with western anoraks like myself with critical acclaim as some of the best ever made in the genre.

Ask Chris - ComicsAlliance Q: Is it ever worth it to change comics canon to match the canon from other media? -- @firehawk32 A: This is a really interesting question for me, because I always think of myself as someone who doesn't really get excited about superheroes showing up in movies or TV. I mean, obviously, that's not actually true -- I mean, I cowrote what was essentially a full-length novel about The Dark Knight, Batman: The Animated Series ranks alongside oxygen and pizza as my favorite thngs in the universe, I could not have been more stoked about seeing Arnim Zola The Bio Fanatic in two major Hollywood films, and there will never be a time when I'm not still mad about Man of Steel. But at the same time, and at the risk of sounding like even more of a hipster elitist than usual, those aren't the "real" versions of those charactesr to me.

VR Gloves (my project) There are many issues with optical systems. While they've gotten decent, you need only look at the leap motion to see the problems with it. The biggest issue being that optics require line of sight. Jess Nevins LoEG Annotations Annotations for League of Extraordinary Gentlemen: Nemo: River of Ghosts By Jess Nevins Page 4. "Pendant Books" Padraig O Mealoid points out that this is the same publisher that's named on the cover of Sal Paradyse's Crazy Wide Forever in the Black Dossier.