Wearables. Internet of Things. Mobile. AdTech. Tenth Grade Tech Trends — Product Design. A few months ago, my fifteen-year-old sister told me that Snapchat was going to be the next Instagram. 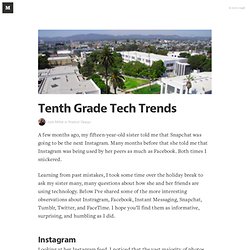 Many months before that she told me that Instagram was being used by her peers as much as Facebook. Both times I snickered. Learning from past mistakes, I took some time over the holiday break to ask my sister many, many questions about how she and her friends are using technology. Below I’ve shared some of the more interesting observations about Instragram, Facebook, Instant Messaging, Snapchat, Tumblr, Twitter, and FaceTime.

I hope you’ll find them as informative, surprising, and humbling as I did. Instagram Looking at her Instagram feed, I noticed that the vast majority of photos were of people – not beautiful views, objects, or experiences. My takeaway: Facebook was smart to buy Instagram. Facebook She mentioned that she tries to visit Facebook as infrequently as possible. My takeaway: Facebook may have an irreversibly bad brand. Instant Message Snapchat Tumblr Twitter I don’t read links.

The Churchill Club and Forbes gathered five prominent venture capitalists — Accel Partners’ Kevin Efrusy, Kleiner Perkins’ Bing Gordon, Greylock’s Reid Hoffman, Draper Fisher Jurvetson’s Steve Jurvetson, and Clarium Capital’s Peter Thiel — Tuesday night for an annual panel discussion on the “Top 10 Tech Trends.” The VCs each pitched two “tech trends” they anticipate seeing within in the next five years to the audience watching online and in person at the Hyatt Regency in Santa Clara. Here’s a few highlights of the trends they predicted: - “Zero marginal cost of education” - Gordon predicted that the cost of education will rapidly decrease as our education system relies more on the Internet and other digital technology to educate students. - “Massive sensors and data” - Hoffman said he anticipates that sensors will be part of absolutely everything as they become increasingly cheaper. 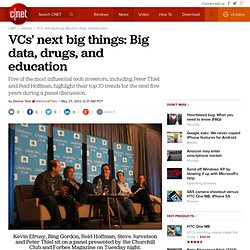 --Some of Silicon Valley's greatest minds used an interesting piece of hardware to vote on which trends will rule the tech world: ping pong paddles. The Churchill Club, a business and technology forum, hosted discussion here Tuesday night, along with Forbes magazine, to pick the brains of Kevin Efrusy, Bing Gordon, Reid Hoffman, Steve Jurvetson, and Peter Thiel. With a few hundred people seated in the grand ballroom of the Hyatt Regency Santa Clara, each investor presented his case for two ideas for what he thought would be a dominating tech trend for the next five years. Each held up a ping pong paddle to show whether he agreed -- green for yes and red for no. The pitches were accompanied by approval ratings collected via green and red cards at attendees' tables and a survey done by TwitPolls.com, a Twitter polling service.

Gordon's digitalization of education also hit a high note. "For digital natives, public schools are jails," Gordon said. Corrected at 1:45 a.m. People, Companies, and Trends: Techonomy's 2013 Top Ten. As 2013 winds down, Techonomy takes a moment to look back on highlights from the year, especially those that portend—we think—the future. Our Top Ten list recognizes the people, companies, and ideas that embodied how technology is catalyzing change in business and society. Some of the individuals and organizations here were represented at our 2013 conferences, labs, and dinners, where we convene leaders to explore the biggest tech-driven challenges and opportunities.

Some were featured in our expanding online editorial content. 1. Cybersnooping on Everyone, and the Urgent Need for Response Photo: President Barack Obama talks with Michael Froman, then NSA deputy for international and economic affairs, during a working dinner at the G8 Summit, June 25, 2010. The outing of the National Security Agency’s PRISM data-collection program and its privileged access to internal user data at nine U.S. Not that the news was much of a surprise, especially for techonomists. 2.