Future. The future is what will happen in the time period after the present. Its arrival is considered inevitable due to the existence of time and the laws of physics. Future Possibilities. External Magnetic Fields. 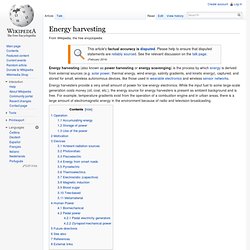 Energy harvesters provide a very small amount of power for low-energy electronics. While the input fuel to some large-scale generation costs money (oil, coal, etc.), the energy source for energy harvesters is present as ambient background and is free. For example, temperature gradients exist from the operation of a combustion engine and in urban areas, there is a large amount of electromagnetic energy in the environment because of radio and television broadcasting. Operation[edit] Energy harvesting devices converting ambient energy into electrical energy have attracted much interest in both the military and commercial sectors.

And. New Wave Energy UK - Home. Brillouin had Los Alamos and SRI validations. Wind power — even without the wind. Offshore wind could provide abundant electricity — but as with solar energy, this power supply can be intermittent and unpredictable. 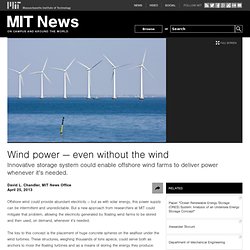 But a new approach from researchers at MIT could mitigate that problem, allowing the electricity generated by floating wind farms to be stored and then used, on demand, whenever it’s needed. The key to this concept is the placement of huge concrete spheres on the seafloor under the wind turbines. Home Energy International. Energy Ball V200® (Battery connected / off grid) The Energy Ball® V200 Battery Chargeris an artistic spherical wind turbine with 5 rotor blades and a diameter of 1.98 m which you can use to produce some of your own electricity supply soundlessly. 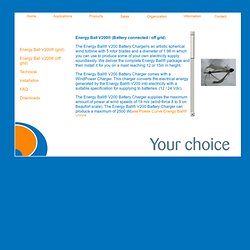 We deliver the complete Energy Ball® package and then install it for you on a mast reaching 12 or 15m in height. The Energy Ball® V200 Battery Charger comes with a WindPower Charger. This charger converts the electrical energy generated by the Energy Ball® V200 into electricity with a suitable specification for supplying to batteries. (12 / 24 Vdc). The Wind Sphere- Vertical Axis Wind Turbine Power System. The Wind Sphere™ relies on its "wind tunnel" effect known in physics as the Bernoulli Principle. 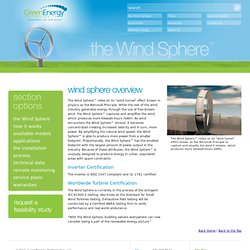 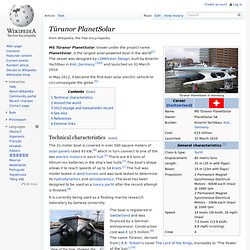 In May 2012, it became the first ever solar electric vehicle to circumnavigate the globe.[5] Technical characteristics[edit] European Tribune - Community, Politics & Progress. How cheap will solar cells get? 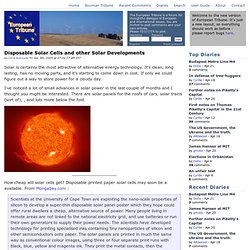 Disposable printed paper solar cells may soon be a available. From Mongabay.com : Scientists at the University of Cape Town are exploiting the nano-scale properties of silicon to develop a super-thin disposable solar panel poster which they hope could offer rural dwellers a cheap, alternative source of power. Many people living in remote areas are not linked to the national electricity grid, and use batteries or run their own generators to supply their power needs. The scientists have developed technology for printing specialised inks containing tiny nanoparticles of silicon and other semiconductors onto paper. Alta Devices: Finding a Solar Solution. Suited up: CEO Christopher Norris holds a gallium arsenide wafer used in making Alta’s solar cells. 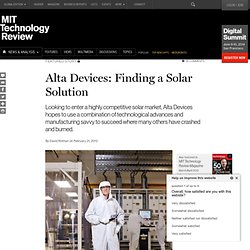 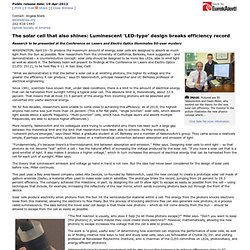 Solar Harvesting Textiles Energize ‘Soft House’ If architect Sheila Kennedy gets her way, textiles will soon be able to take the sun’s energy and turn it into electricity. 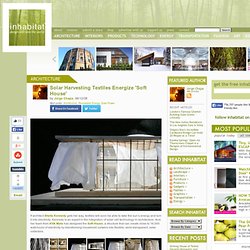 Kennedy is an expert in the integration of solar cell technology in architecture. And, her team from KVA Matx has designed the Soft House, a structure that can create close to 16,000 watt-hours of electricity by transforming household curtains into flexible, semi-transparent, solar collectors. Textiles have been a fixture of architecture and design for their ability to define and modify a space. For Sheila Kennedy, textiles are just another material from which energy can be generated. The thin-film photovoltaic textiles are essentially solar panels created from organic photovoltaics. Miles Barr: Printing Solar Cells on Paper and Clothes. Forget about putting solar panels on the roof. 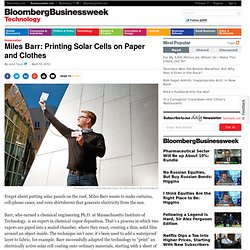 Miles Barr wants to make curtains, cell-phone cases, and even shirtsleeves that generate electricity from the sun. Barr, who earned a chemical engineering Ph.D. at Massachusetts Institute of Technology, is an expert in chemical vapor deposition. That’s a process in which two vapors are piped into a sealed chamber, where they react, creating a thin, solid film around an object inside. The technique isn’t new; it’s been used to add a waterproof layer to fabric, for example. Barr successfully adapted the technology to “print” an electrically active solar cell coating onto ordinary materials, starting with a sheet of paper in 2010.

Chemical vapor deposition changes the quality of a surface without using extreme temperatures or solvents that might cause damage. Piezoelectricity. Piezoelectricity is exploited in a number of useful applications, such as the production and detection of sound, generation of high voltages, electronic frequency generation, microbalances, to drive an ultrasonic nozzle, and ultrafine focusing of optical assemblies. It forms the basis for a number of scientific instrumental techniques with atomic resolution, the scanning probe microscopies, such as STM, AFM, MTA, and SNOM. It also finds everyday uses such as acting as the ignition source for cigarette lighters, and push-start propane barbecues, as well as being used as the time reference source in quartz watches. History[edit] Discovery and early research[edit] Piezo Ceramics. Paper battery. A paper battery is an ultra-thin electric battery engineered to use a spacer formed largely of cellulose (the major constituent of paper).

It incorporates nanoscale structures to act as high surface-area electrodes to improve the conduction of electricity.[1] Paper batteries are thin, flexible and environment-friendly, allowing integration into a wide range of products. Paper Battery Co. AspectSolar. Watch ‘Futurama Season 7 Episode 17’ on Sockshare for free. University news. Issued: Mon, 16 Apr 2012 09:20:00 BST A new 3D printing process developed at the University of Glasgow could revolutionise the way scientists, doctors and even the general public create chemical products. Professor Lee Cronin, Gardiner Chair of Chemistry at the University, believes his research could lead to the development of home chemical fabricators which consumers could use to design and create medicine at home. 3D Printing Creates 'Bionic Ear'