Sockeye To Return In Historic Abundance : Russ George. Projections from throughout the ocean and fisheries science venues are advising that this years Fraser River Sockeye Salmon runs will be the all time historic high, twice the previous record of 1900. 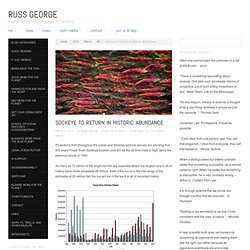 As many as 72 million of the bright red fish are expected where the largest runs in all of history have never exceeded 45 million. Even if the run is in the mid-range of the estimates at 25 million fish the run will be in the top 6 in all of recorded history. 72 Million Fraser River Sockeye Predicted for 2014 That high bar on the far right side of the chart is the 2010 run which have been named the volcano miracle salmon. In mid August 2008 the Kasatochi volcano in Alaska erupted and spewed mineral rich ash onto a part of the NE Pacific ocean salmon pasture. The Fraser River sockeye projection is in line with other stunning returns of salmon that coincide with the work to restore their ocean pasture which was successfully accomplished in the summer of 2012. Green Revolution. Increased use of various technologies such as pesticides, herbicides, and fertilizers as well as new breeds of high yield crops were employed in the decades after the Second World War to greatly increase global food production. 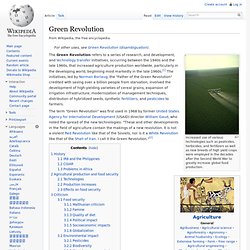 The Green Revolution refers to a series of research, and development, and technology transfer initiatives, occurring between the 1940s and the late 1960s, that increased agriculture production worldwide, particularly in the developing world, beginning most markedly in the late 1960s.[1] The initiatives, led by Norman Borlaug, the "Father of the Green Revolution" credited with saving over a billion people from starvation, involved the development of high-yielding varieties of cereal grains, expansion of irrigation infrastructure, modernization of management techniques, distribution of hybridized seeds, synthetic fertilizers, and pesticides to farmers.

History[edit] Indian scientists on path to improve fruit shelf life. Indian scientists on path to improve fruit shelf life Send to a friend December 27th, 2012 Scientists in India have developed a coating with the potential to keep fruits on the shelf for up to two weeks longer, the reported. Kinnow, Photo: SirSadiq Indian Institute of Natural Resins and Gums (IINRG) researchers successfully tested the water-soluble coating on the citrus fruit kinnow and are conducting research on other produce such as oranges, apples, gourds and eggplants. IINRG scientist S.K. He said the lac-based product has the potential to revolutionize fruit and vegetable storage. “The coating, which is water soluble and (has been) tested for food quality, increases shelf life of fruits and also preserves moisture,” Pandey told . “This helps in long-distance transportation of fruits and helps in getting a wider market.

The product functions by preserving moisture and protecting produce from germs. www.freshfruitportal.com. 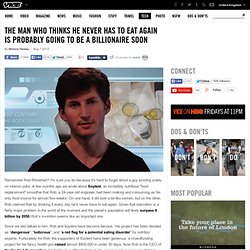 I'm sure you do because it's hard to forget about a guy existing solely on vitamin puke. A few months ago we wrote about Soylent, an incredibly nutritious "food replacement" smoothie that Rob, a 24-year-old engineer, had been making and consuming as his only food source for almost five weeks. On one hand, it did look a bit like semen, but on the other, Rob claimed that by drinking it every day he'd never have to eat again. Given that starvation is a fairly major problem in the world at the moment and the planet's population will likely surpass 9 billion by 2050, Rob's invention seems like an important one. Since we last talked to him, Rob and Soylent have become famous. With over $1 million in preorders already received for Soylent worldwide, it seems like this stuff is going to stick around. VICE: Hey Rob. How have you dealt with all the media attention? 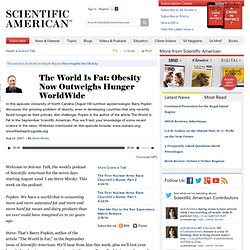 I am Steve Mirsky. This week on the podcast: Popkin: We have a world that is consuming more and more saturated fat and more and more hard fat meats and dairy products than we ever could have imagined 10 to 20 years ago. Steve: That's Barry Popkin, author of the article "The World Is Fat," in the September issue of Scientific American. We'll hear from him this week, plus we'll test your knowledge about some recent science in the news. Steve: Hi Professor Popkin. Popkin: Fantastic! Steve: Tell me about this article and this subject, "the world is fat. " Popkin: Yeah! Steve: When you say move less, you mean, actually walk less or bicycle less? Popkin: Walk less, lift less, sit more. Steve: And worldwide, the figures are astounding. Popkin: Right!