Technology and education. We have been involved in the use of technology in education since 1984. 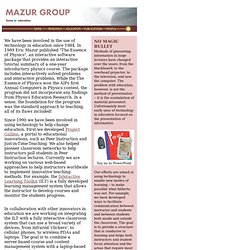 In a sense, the foundation for the program was the standard approach to teaching, all of its flaws included! Since 1990 we have been involved in using technology to help change education. In collaboration with other innovators in education we are working on integrating the ILT with a fully interactive classroom system that can use a broad variety of devices, from infrared 'clickers', to cellular phones, to wireless PDAs and laptops. 2014 is the year of the internet of things—no, seriously, we mean it this time - Quartz. The first in a series. 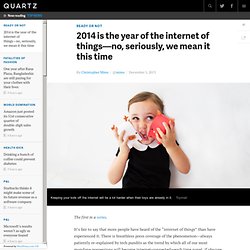 It’s fair to say that more people have heard of the “internet of things” than have experienced it. There is breathless press coverage of the phenomenon—always patiently re-explained by tech pundits as the trend by which all of our most mundane possessions will become internet-connected—each time novel, if obscure, inventions make a name off successful Kickstarter campaigns. These are invariably coupled with estimates that the internet of things will be a multi-trillion dollar business. Yet despite repeated declarations by the technorati that each passing year will be the year the internet of things breaks out, one of the most successful sellers of baubles that help make your home “smart,” Smartthings, has only shipped 10,000 or so units since its debut a year ago. (Compare that to, say, the 360 million smartphones sold in China in 2013 alone.) We’re already part-way there.

How the “internet of things” will replace the web. The second in a series. 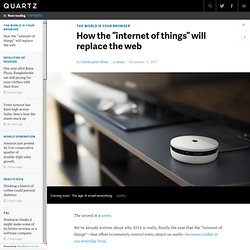 We’ve already written about why 2014 is really, finally the year that the “internet of things”—that effort to remotely control every object on earth—becomes visible in our everyday lives. But most of us don’t recognize just how far the internet of things will go, from souped-up gadgets that track our every move to a world that predicts our actions and emotions.

In this way, the internet of things will become more central to society than the internet as we know it today. The web will survive, just as email survived the arrival of the web. But its role will be reduced to that of a language for displaying content on screens, which are likely to be more ubiquitous but less necessary. Setting Technology Goals for the New Year. Photo credit: iStockphoto New Year's Day is traditionally the time when we look back on the past 12 months and make resolutions for the next 12. 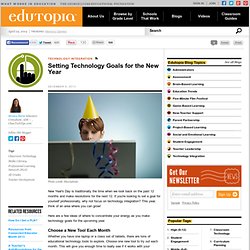 If you're looking to set a goal for yourself professionally, why not focus on technology integration? This year, think of an area where you can grow! Here are a few ideas of where to concentrate your energy as you make technology goals for the upcoming year. Choose a New Tool Each Month Whether you have one laptop or a class set of tablets, there are tons of educational technology tools to explore. Join a Twitter Chat All around the globe, educators are doing exciting work in their classrooms. Host a Google Hangout Even if you just try it out with family first, host a Google Hangout to connect your computer screen with friends from around the country.

Use Your Phone This year I've shared some of my favorite technology tools that you can use straight from a smartphone. Check Out Pinterest Pinterest is a fantastic resource for teachers! Try Skype. Top 10 Predictions for Technology in 2014. Big Pharma’s focus on blockbuster cancer drugs squeezes out cheaper treatments. 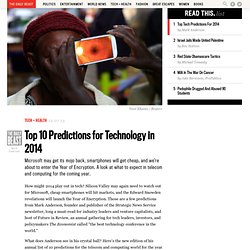 The result, one researcher says: ‘If we’re winning the war on cancer, we’re not winning that fast.’ Michael Retsky awoke from surgery to bad news. The tumor in his colon had spread to four of his lymph nodes and penetrated the bowel wall. When Retsky showed the pathology report to William Hrushesky, his treating oncologist, the doctor exclaimed, “Mamma mia.” “Michael had a mean-looking cancer,” Hrushesky remembers. Retsky didn’t need anyone to tell him his prognosis. In the absence of chemotherapy, there was an 80 percent chance of relapse. Like many cancer patients, Retsky didn’t much like the odds. Seventeen years later and cancer-free, Retsky cannot be entirely sure the treatment cured him, but he believes it likely did. Take Michelle Holmes, an associate professor of medicine at Harvard Medical School. The newer drugs have in some cases shown dramatic life-extending results for patients.