Disrupting traditional higher education: KnowledgeWorks Forecast 3.0. In the recent Forecast 3.0 KnowledgeWorks has cataloged five disruptions that will reshape learning over the next decade: Democratized startupHigh-fidelity livingDe-institutionalized productionCustomizable value websShareable cities The net result of these disruptions will be to set free teaching and learning from traditional institutions so they can merge with a global learning ecosystem, a vibrant community equipped with new assumptions, models, and relationships, and featuring a novel recombination of resources. 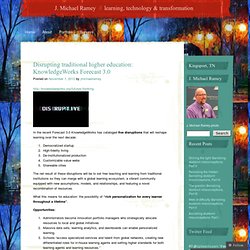 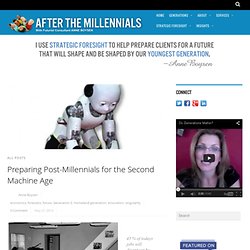 Three Big Changes Ahead for Higher Education. “The world as we have created it is a process of our thinking. 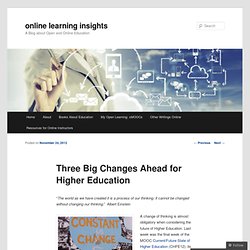 It cannot be changed without changing our thinking.” Albert Einstein A change of thinking is almost obligatory when considering the future of Higher Education. Last week was the final week of the MOOC Current/Future State of Higher Education (CHFE12); its overarching objective was to explore the influences and pressures facing universities today and to identify where higher education is headed. Numerous esteemed educators [including author and Georgia Tech's Richard Demillo and Vice Provost Joel Hartman of University of Central Florida] shared their knowledge, expertise, research, and in some cases predictions via webinars, to shed light on the conundrums within higher ed.

2-Year Colleges Are at Risk of 'Separate and Unequal' Future, Report Says - Administration. By Goldie Blumenstyk Washington Community colleges "are in great danger of becoming indelibly separate and unequal institutions in the higher-education landscape," a Century Foundation task force warns in a report being released here on Thursday. 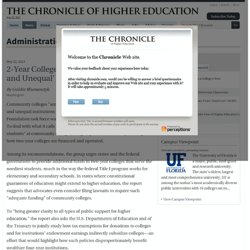 To deal with what it calls "the increasing economic and racial isolation of students" at community colleges, the group also calls for major changes in how two-year colleges are financed and operated. Among its recommendations, the group urges states and the federal government to provide additional funds to two-year colleges that serve the neediest students, much in the way the federal Title I program works for elementary and secondary schools. In states where constitutional guarantees of education might extend to higher education, the report suggests that advocates even consider filing lawsuits to require such "adequate funding" of community colleges. Radical Change Needed Showering the Wealthy Richard D. "That's Political Science 101," Mr. Mr. Mr. Mapping The Future Of Education Technology. Add this massive infographic to the recent discussion of futuristic dorms and what education will look like in 2020--and beyond. 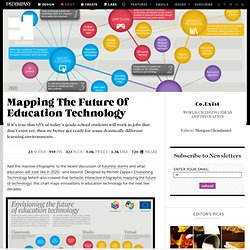 Designed by Michell Zappa’s Envisioning Technology (which also created that fantastic interactive infographic mapping the future of technology), this chart maps innovations in education technology for the next few decades. Click to enlarge. It illustrates a shift from a classroom-centered approach toward an increasingly virtual set of learning environments.

College at Risk - The Chronicle Review. By Andrew Delbanco If there's one thing about which Americans agree these days, it's that we can't agree. 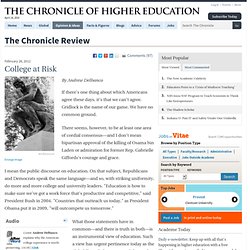 Gridlock is the name of our game. We have no common ground. There seems, however, to be at least one area of cordial consensus—and I don't mean bipartisan approval of the killing of Osama bin Laden or admiration for former Rep. Gabrielle Giffords's courage and grace. I mean the public discourse on education. Audio Listen: Andrew Delbanco explains why the American college experience is worth preserving. (14:18) | Link. What Is the Future of Higher Education? [Video] At this year’s TEDx VillanovaU event, Michele Pistone — a professor at Villanova School of Law— spoke about the future of higher education. 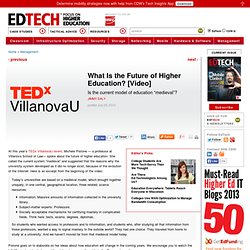 She called the current system “medieval” and suggested that the reasons why the university system developed as it did no longer exist, because of the evolution of the Internet. Here is an excerpt from the beginning of the video: Today’s universities are based on a medieval model, which brought together uniquely, in one central, geographical location, three related, scarce resources:Information: Massive amounts of information collected in the university library.Subject-matter experts: Professors.Socially acceptable mechanisms for certifying mastery in complicated fields.

Think here: tests, exams, degrees, diplomas.So students who wanted access to professors and to information, and students who, after studying all that information from those professors, wanted a way to signal mastery to the outside world? They had one choice. What Higher Education Will Look Like in 2020 [STUDY] In 2020, students may be able to travel to faraway continents, and attend a school halfway around the world. 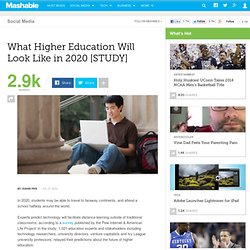 Experts predict technology will facilitate distance learning outside of traditional classrooms, according to a survey published by the Pew Internet & American Life Project. In the study, 1,021 education experts and stakeholders including technology researchers, university directors, venture capitalists and Ivy League university professors, relayed their predictions about the future of higher education. 5 Jobs That Will Be Popular for Online Students in 2017 [Infographic] As online learning continues to grow in popularity and availability, the career outlook for some professionals is looking bright. 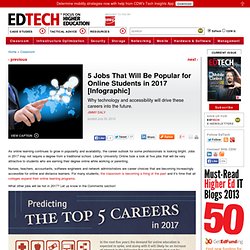 Jobs in 2017 may not require a degree from a traditional school. Liberty University Online took a look at five jobs that will be very attractive to students who are earning their degree online while working or parenting. Nurses, teachers, accountants, software engineers and network administrators are career choices that are becoming increasingly accessible for online and distance learners. Moody's Gives Higher Education a Bleak Outlook.