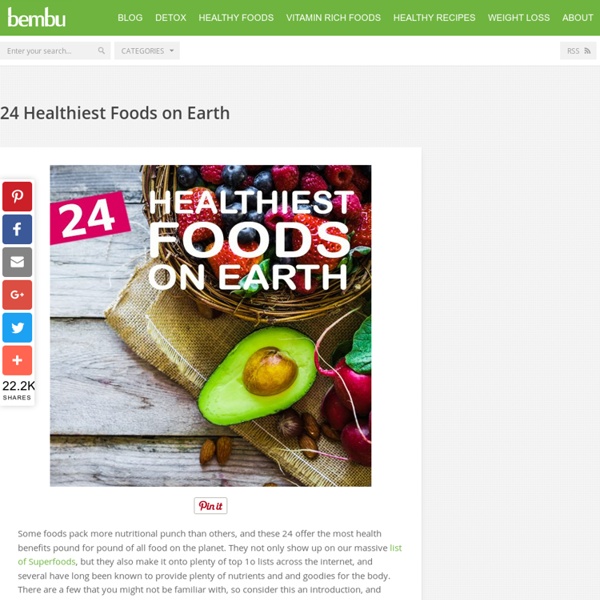 Some foods pack more nutritional punch than others, and these 24 offer the most health benefits pound for pound of all food on the planet. They not only show up on our massive list of Superfoods, but they also make it onto plenty of top 1o lists across the internet, and several have long been known to provide plenty of nutrients and and goodies for the body. There are a few that you might not be familiar with, so consider this an introduction, and then you can get to know them better in the future… 1. Spinach Much has been written about the virtues of spinach, and rightly so. Benefits Right away spinach is going to go to work for you, providing you with energy, and helping you to fill your stomach without adding a lot of calories to your daily intake. Nutritional Breakdown per Cup – Raw, think fresh leafy greens Vitamin A – 2813 IU – over half of what you need daily. 2. Many people are just finding out how good goji berries are for your overall feeling of well-being. 3. 4. 5. 6. 7. 8. 9.

Ancient Secrets: the Truth About Energy Healing Energy is all around us – right? Actually, we ARE energy, and when we need to heal our physical bodies, we do so by applying the right energy healing techniques to raise our vibration to correspond with the energy of well-being. Okay, admittedly that’s a bit “out there” given the teachings of modern medicine that focuses on alleviating physical and psychological symptoms without addressing the true cause of the ailments… the cause being an overabundance of low-vibrating energy in the individual’s energy field or imbalances in that field. Energy is Medicine Energy healing has been used by ancient healers since the dawn of man. What Are The Healthiest Sources of Carbohydrates? Carbohydrates are fuel for metabolism. Chemical reactions in cells require fuel. Muscles, from heart to digestive system to biceps and quads all use carbohydrate, in the form of glucose. Brain cells need twice the energy as other cells.

Self-Healing: Proof It Works And 9 Key Steps To Doing It Successfully By Paul Brundtland Guest Writer for Wake Up World Countless people who have suffered from years of pain, discomfort, and limited physical ability have found complete healing through mind/body re-education. 15 Amazing Health Benefits of Eating Avocados Many of us do not have to be “sold” on the benefits of avocados—their silky texture and versatile flavor make them hard not to love. But when studies show that avocado-eaters are healthier overall than their counterparts, we feel justified in our love-affair with avocados. And the research may even convince some non-avocado-eaters to cross over to the other side.

20 Reasons you should Drink Lemon Water in the MorningDrink Warm Lemon Water In The Morning For A Year (And These 20 Things Happen) Adding lemon to water not only quenches thirst better than any other beverage, but it also nourishes our body with vitamins, minerals and trace elements which we absolutely need. Lemon with water can be considered the best natural energy booster. When we wake up in the morning, our bodily tissues are dehydrated and are in need of water to push out toxins and rejuvenate the cells. In other words, this homemade “lemonade” helps eliminate internal toxins, regulating proper kidney and digestive tract functions by forcing them to work as smoothly as possible.

Scientific Proof Thoughts & Intentions Can Alter The Physical World Around Us Dr. Masaru Emoto, a researcher and alternative healer from Japan has given the world a good deal of evidence of the magic of positive thinking. He became famous when his water molecule experiments featured in the 2004 film, What The Bleep Do We Know? His experiments demonstrate that human thoughts and intentions can alter physical reality, such as the molecular structure of water. Given that humans are comprised of at least 60% water,his discovery has far reaching implications… can anyone really afford to have negative thoughts or intentions? The rice experiment is another famous Emoto demonstration of the power of negative thinking (and conversely, the power of positive thinking.)

How to Make Homemade Flour Baking successfully with whole-grain flours requires putting them at the center of each recipe, rather than thinking of them as add-ons, and Tabitha Alterman shows you how to do just that in Whole Grain Baking Made Easy (Voyageur Press, 2014). From mainstays, such as wheat and rye, to less-common choices, such as amaranth and teff, learn how to craft more than 50 mouthwatering recipes by following the simple instructions and beautiful full-color photography throughout this guide. The following excerpt is from chapter 2, “Grain Mill Buyer’s Guide.” You can purchase this book from the MOTHER EARTH NEWS store: Whole Grain Baking Made Easy.

Emotional Energetic Healing: The Future of Medicine is Here 5th June 2015 By Carolanne Wright Contributing Writer for Wake Up World “Everything is energy.” ~ Albert Einstein Energy medicine is at once time-honored and new. Whether using traditional forms like acupuncture, t’ai chi and reiki or modern applications such as Emotional Freedom Technique (EFT), magnetic, vibrational or music therapy, working with the human energetic system to create wellness is an esteemed practice that produces tangible results.