A Fear of Food: A History of Eating Disorders. In the late 1800s, the curtain was about to rise on modern conceptions of anxiety. 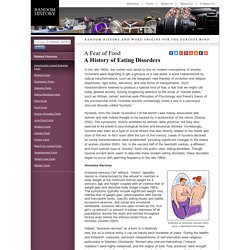 Victorians were beginning to get a glimpse of a new world, a world characterized by radical transformations, such as the telegraph, new theories of evolution and religion, telephones, light bulbs, elevators, and new forms of transportation. Such transformations seemed to produce a special kind of fear, a fear that we might call today general anxiety. Among burgeoning attention to the study of “mental states,” such as William James’ seminal work Principles of Psychology and Freud’s theory of the unconscious mind, Victorian doctors increasingly noted a rise in a previously obscure disorder called “hysteria.” Hysteria, from the Greek hysterikos (“of the womb”) was mainly associated with women and was indeed thought to be caused by a dysfunction of the uterus (Stacey 2002). 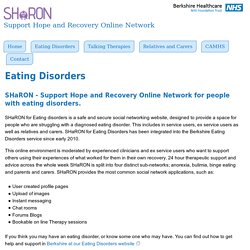 SHaRON for Eating disorders is a safe and secure social networking website, designed to provide a space for people who are struggling with a diagnosed eating disorder. This includes in service users, ex service users as well as relatives and carers. SHaRON for Eating Disorders has been integrated into the Berkshire Eating Disorders service since early 2010. This online environment is moderated by experienced clinicians and ex service users who want to support others using their experiences of what worked for them in their own recovery. 24 hour therapeutic support and advice across the whole week SHaRON is split into four distinct sub-networks; anorexia, bulimia, binge eating and parents and carers.

Claire Mysko, an award-winning author and expert on body image, leadership and media literacy, explains: “While social media is not the cause of low self-esteem, it has all the right elements to contribute to it. 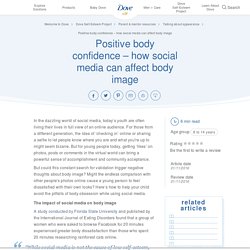 Social media creates an environment where disordered thoughts and behaviours really thrive.” For young people who have a tendency towards perfectionism, anxiety or disordered eating, the (often digitally enhanced) images of thin girls or women they see online can lead them to equate slimness with happiness. Validation of their own photos from other social media users (“you look great!” “have you lost weight?”) May falsely fulfil their need for acceptance – further distorting their body image. Mysko warns that, while social media gives young people– especially girls – the feedback and validation they crave, it can also “serve as a catalyst for more insecurity. " How can parents help with young people's body image issues The social media impact on young people needn’t be negative. 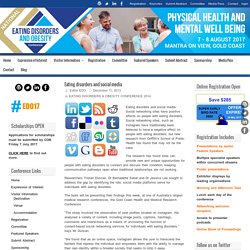 Social networking sites, such as Instagram have traditionally been believed to have a negative effect on people with eating disorders, but new research from Griffith’s School of Public Health has found that may not be the case. The research has found sites can provide new and unique opportunities for people with eating disorders to connect and discuss their condition, keeping communication pathways open when traditional relationships are not working.

Researchers Tristan Duncan, Dr Bernadette Sebar and Dr Jessica Lee sought to address the gap by identifying the role, social media platforms serve for individuals with eating disorders. The team will be presenting their findings this week, at one of Australia’s largest medical research conferences, the Gold Coast Health and Medical Research Conference. “The study involved the observation of user profiles located on Instagram. Eating Disorders: Cultural and Social Factors-Topic Overview. Eating disorders occur most often in industrialized cultures where there is an emphasis on thinness, especially if thinness is linked to success. 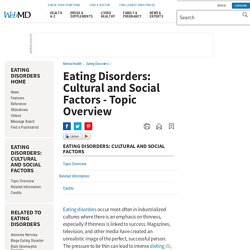 Magazines, television, and other media have created an unrealistic image of the perfect, successful person. The pressure to be thin can lead to intense dieting, even in very young children, which can turn into an eating disorder in people who are more likely (predisposed) to get the disorders. Eating Disorders and Social Media - UK Addiction Treatment Centres. Eating disorders are becoming increasingly common, but are more prominent in young adults and teenagers. 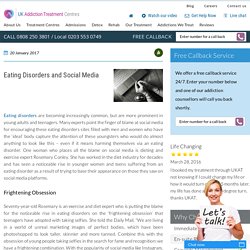 Many experts point the finger of blame at social media for encouraging these eating disorders sites filled with men and women who have the ‘ideal’ body capture the attention of these youngsters who would do almost anything to look like this – even if it means harming themselves via an eating disorder. One woman who places all the blame on social media is dieting and exercise expert Rosemary Conley. She has worked in the diet industry for decades and has seen a noticeable rise in younger women and teens suffering from an eating disorder as a result of trying to base their appearance on those they saw on social media platforms.

Frightening Obsession Seventy-year-old Rosemary is an exercise and diet expert who is putting the blame for the noticeable rise in eating disorders on the ‘frightening obsession’ that teenagers have adopted with taking selfies. Social Media and Eating Disorders. By: Dakotah Williams and Laryn Hurley With instant access to Facebook, Instagram, Pinterest, and other forms of social media linking us to millions of people with just a click of a button on a computer, cell phone, etc, it is no wonder that our lives have become a popularity contest based on how many “likes” we receive. 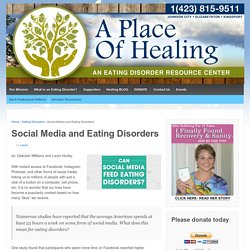 Numerous studies have reported that the average American spends at least 23 hours a week on some form of social media. What does this mean for eating disorders? One study found that participants who spent more time on Facebook reported higher incidences of body image concerns contributing to appearance-focused behaviors further increasing the risk for the development of eating disorders. In addition, just twenty minutes of Facebook consumption contributed to the maintenance of a higher weight, shape concerns, and anxiety compared to those who invested less time on Facebook. Social media used to encourage anorexia and bulimia. Creating a Pro-Recovery Movement in Social Media Social media has completely transformed the manner in which we view ourselves, perceive others, and interact with society. 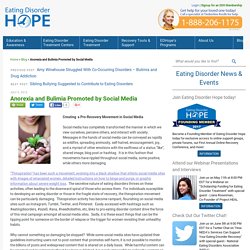 Messages in the hands of social media can be conveyed as rapidly as wildfire, spreading animosity, self-hatred, encouragement, joy, and a myriad of other emotions with the swiftness of a status “like”, shared image, blog post or hashtag. It is in this fashion that movements have rippled throughout social media, some positive, while others more damaging. “Thinspiration” has been such a movement, evolving into a black shadow that infects social media sites with images of emaciated women, detailed instructions on how to binge and purge, or graphic information about severe weight loss.

The secretive nature of eating disorders thrives on these activities, often leading to the downward spiral of those who access them. Why cannot something so damaging be stopped? Lynne Featherstone speech on body image. Welcome everyone. 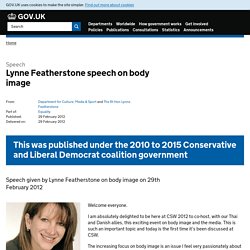 I am absolutely delighted to be here at CSW 2012 to co-host, with our Thai and Danish allies, this exciting event on body image and the media. This is such an important topic and today is the first time it’s been discussed at CSW. The increasing focus on body image is an issue I feel very passionately about and judging from the numbers in this room there are a lot of people who care too.

This is an issue that affects every household in the UK. We received overwhelming interest and enthusiasm about this event. So why are we here today? Combating poverty, starvation, violence against women and girls, female genital mutilation, forced and early marriage and maternal mortality are, of course, at the top of the international agenda. But we are also faced with a crisis where surprisingly high levels of women in the global south as well as the north feel compelled to conform to a distorted vision of beauty. GEO invited to speak about UK Body Confidence Campaign at CSW59. I am delighted to be here to talk about what we are doing in the UK to address the growing problem of poor body image. 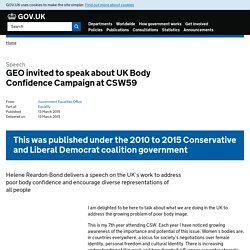 This is my 7th year attending CSW. Each year I have noticed growing awareness of the importance and potential of this issue. Women’s bodies are, in countries everywhere, a locus for society’s negotiations over female identity, personal freedom and cultural identity. There is increasing understanding of this work and how deeply it influences our wider struggle for gender equality.