Behind the scenes at a McDonald's photo shoot 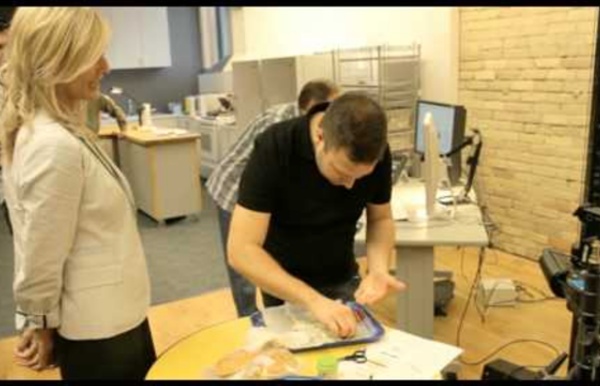 Healthy Food Pyramid updated for the first time in 15 years - Lifestyle Australians have been given a new guideline on healthy eating for the first time in 15 years, as industry experts call for sugar and junk food to be dumped from all diets. Nutrition Australia has updated its Healthy Eating Pyramid after it remained unchanged since 1999, and the new version includes some hip foods that would have been hard to find on a supermarket shelf in the 90s. The new pyramid includes soy milk, quinoa and tofu for the first time, along with traditional staples such as fruit, vegetables, grains and dairy products. It also rules out junk food entirely, and calls for people to cut added sugar and salt out of their diet immediately. Nutrition Australia executive officer Lucinda Hancock said the pyramid can help all Australians. "The foundation is the same as the original healthy eating pyramid - to have a plant-based diet with 70 per cent of your diet made up of fruit vegetables and grains," Ms Hancock told Ninemsn. Continued below. Key to healthy living: Eat real foods

Steve Jobs à Merci pour l'info (Emmanuel Chain) - Sep 16, 2003 What Americans can learn from other food cultures For me, a first-generation Korean-American, comfort food is a plate of kimchi, white rice, and fried Spam. Such preferences are personally meaningful — and also culturally meaningful. Our comfort foods map who are, where we come from, and what happened to us along the way. Notes Jennifer 8. In much of China, only the older generations still shop every day in the wet market, then go home and cook traditional dishes. Jennifer Berg, director of graduate food studies at New York University, notes that food is particularly important when you become part of a diaspora, separated from your mother culture. Food as identity The “melting pot” in American cuisine is a myth, not terribly unlike the idea of a melting pot of American culture, notes chef Dan Barber (TED Talk: How I fell in love with a fish). Most cultures don’t think about their cuisine in monolithic terms. American cuisine is shaped by the natural wealth of the country. So if what we eat is what we are, what are Americans?

Katy Perry' link to heavy teens under lens Video will play in Play now Don't auto play Never auto play Would US teens be any slimmer if Katy Perry hawked kale and quinoa? New research doesn't prove a link, but its authors think music stars popular with teens may be contributing to the obesity epidemic by endorsing fatty fast food, snacks and soda. The study shows that 20 of the hottest teen-music heartthrobs have done TV ads or other promotions for products nutritionists consider unhealthy. Of 107 food and drink endorsements cited in the study, few were for nutritious foods, the researchers said. About 80 per cent of celebrity-endorsed food ads were high-calorie products including snack chips and chocolate, or fast-food restaurants including McDonald's, Chili's and A&W. Perry is included for her endorsement of Popchips and her appearance in a Pepsi-sponsored Super Bowl half-time show, not an actual endorsement. The study was published on Monday in the journal Pediatrics.

theconversation Food choice has become a moral morass. Discussions about food production and consumption are increasingly loaded with moral language. We’ve witnessed burgeoning debates over which agricultural practices and foodstuffs are “sustainable”, what counts as “clean” or “green” living and eating, and who is “responsible” for obesity, to name just a few. Consumers are increasingly encouraged to seek out a range of ethical foodstuffs, which variously include: local, made in Australia, seasonal, non-genetically modified, humanely-produced, free range, organic, palm oil free, and fair trade. There’s also increasing emphasis on reducing meat consumption, or even finding substitutes for all types of animal products. Our research on food values has shown that consumers are increasingly confused by the multitude of food choices available to them. We’re bombarded with messages about what makes food “good” and “bad”. Information overload The sheer amount of information available can cause paralysis.

'So you put a sugar tax on fizzy drinks ...but what about everything else?' John Key says sugar tax a fizzer A sugar tax is not on the cards for New Zealand at the moment, Prime Minister John Key says. Fizzy drink The government is announcing its plan to tackle childhood obesity this afternoon. Mr Key says there is some evidence sugar taxes work, but "the government's not doing that at the moment". "The problem with sugar tax is: So you put a sugar tax on fizzy drinks fair enough, OK. ‘Buying fizzy drink is voluntary, and everyone knows drinking heaps is bad news’ If we tax sugar, why not fat? But he said obesity has replaced smoking as the long-term issue for New Zealand. "We do need to resolve these issues, but it's a combination of education and exercise." Mr Key hinted the plan would work with schools to target exercise and dietary programmes. The Ministry of Health has been working on the plan to combat obesity for almost a year.

Stuff.co.nz Last updated 16:00, May 19 2016 Kale is great but that doesn't mean you should have it for breakfast, lunch and dinner. Uncle Tobys Ambassador and leading Australian dietitian, Geraldine Georgeou, discusses the dangers of fad dieting that no-one is talking about. Consultant dietitian and nutritionist Georgeou defines fad diets as "a food trend that pops up where someone claims to have found a way of achieving a quick health outcome. However, there are much more harmful consequences when it comes to falling for fad diets. 123rf It's hard to learn healthy food behaviours from fad diets. READ MORE: * Six tips for losing weight without fad diets * What are the best and worst diets? Other problems may arise because a lot of fad diets don't address your individual nutritional requirements, the national health needs or where you are in your life style. Georgeou warns that: "Fad diets teach restriction. How many people do you know that are suddenly "gluten free"? Dean Kozanic - Oversixty.co.nz

Fast food outlets should be kept away from schools, advocates say Last updated 05:00, November 12 2016 Three fast food outlets on Christchurch's Linwood Avenue, all within 100 metres of Linwood Avenue school. Can communities turn the tide on takeaways near schools when local authorities are powerless to act? ADELE REDMOND reports. Tracie Charnock is concerned there's no end to the fast food outlets near Christchurch's Linwood Avenue School. She fights daily to encourage son Zayden to eat what's in his lunchbox but even she is tempted by the smell of KFC wafting over the playground and classrooms. A map showing the proximity of Linwood schools to fast food retailers. Determined to achieve a first for New Zealand, Charnock has vowed to press on with her battle to ban fast food restaurants within 800 metres of Christchurch schools struggling to balance their responsibility to encourage nutrition with an inability to enforce it. Tracie Charnock is leading the charge against fast food outlets near son Zayden Dee's school. - Stuff

How the food you eat affects your brain - Mia Nacamulli Your brain is like a machine that needs specific materials to function well. This website breaks down the different nutritional parts that are necessary, and how they interact with the brain. Take a look and learn about some brain food. Those amino acids are essential for brain function too. Don’t forget about those micronutrients! What happens if our brains, specifically young, growing brains, don’t get the nutrition they need? How sugar affects the brain - Nicole Avena How stress affects your brain - Madhumita Murgia What percentage of your brain do you use?