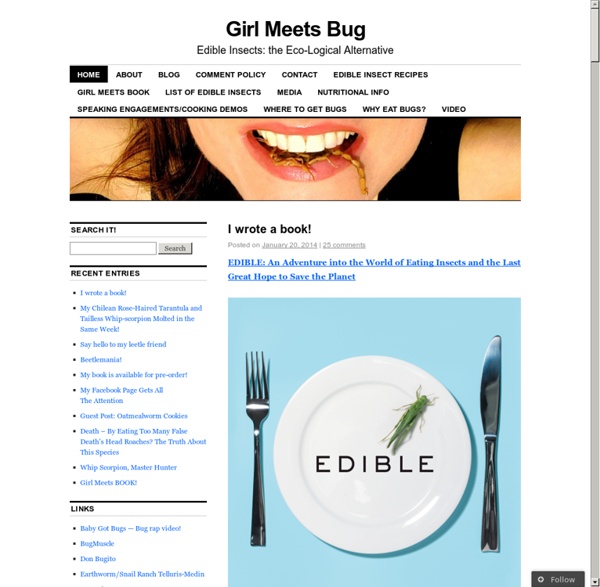 Green Guru: Eating Bugs Insects are an eco-friendly meat alternative. By Susan Cosier Published: July-August 2012 Are there environmental or health benefits to eating bugs? Andy Greenberg, Brooklyn, NY Wriggling larvae and jumping crickets--baked or pan-fried--are the key to our survival, some entomologists actually argue. From an environmental perspective, it's clear why we should be consuming bugs, says Marcel Dicke, a Dutch entomologist who has been studying the benefits of eating insects--a practice called entomophagy--for the past 15 years. The earth's human population will swell from seven billion to nine billion by 2050. Some adventurous entrepreneurs are trying to popularize insect-based foodstuffs. Send recipes or other questions to greenguru@audubon.org. Recipes from David George Gordon, bug chef and author of Eat-A-Bug Cookbook Sheesh! Yield: Six servings Ingredients 1/2 cup lemon juice 1 tablespoon olive oil 1 teaspoon honey 1/2 teaspoon freshly grated ginger 1 tablespoon Dijon mustard 1/4 teaspoon salt

Entomophagy Entomophagy (/ˌɛntəˈmɒfədʒi/, from Greek ἔντομον éntomon, "insect", and φᾰγεῖν phagein, "to eat") is the human use of insects as food. The eggs, larvae, pupae, and adults of certain insects have been eaten by humans from prehistoric times to the present day.[1] Human insect-eating is common to cultures in most parts of the world, including North, Central, and South America; and Africa, Asia, Australia, and New Zealand. Over 1,000 species of insects are known to be eaten in 80% of the world's nations.[2] The total number of ethnic groups recorded to practice entomophagy is around 3,000.[3] However, in some societies insect-eating is uncommon or even taboo.[4][5][6][7][8] Today insect eating is rare in the developed world, but insects remain a popular food in many regions of Latin America, Africa, Asia, and Oceania. Definition[edit] Mealworms presented in a bowl for human consumption In non-humans[edit] History[edit] Uses[edit] Traditional cultures[edit] Western culture[edit] Crickets[edit]

Maslow's hierarchy of needs Maslow's hierarchy of needs, represented as a pyramid with the more basic needs at the bottom[1] Maslow's hierarchy of needs is a theory in psychology proposed by Abraham Maslow in his 1943 paper "A Theory of Human Motivation" in Psychological Review.[2] Maslow subsequently extended the idea to include his observations of humans' innate curiosity. His theories parallel many other theories of human developmental psychology, some of which focus on describing the stages of growth in humans. Maslow used the terms "physiological", "safety", "belongingness" and "love", "esteem", "self-actualization", and "self-transcendence" to describe the pattern that human motivations generally move through. Maslow's theory was fully expressed in his 1954 book Motivation and Personality.[5] The hierarchy remains a very popular framework in sociology research, management training[6] and secondary and higher psychology instruction. Hierarchy Physiological needs Safety needs Safety and Security needs include:

For Most People, Eating Bugs Is Only Natural In Ghana during the spring rains, winged termites are collected and fried, roasted, or made into bread. In South Africa the insects are eaten with cornmeal porridge. In China beekeepers are considered virile, because they regularly eat larvae from their beehives. Gourmands in Japan savor aquatic fly larvae sautéed in sugar and soy sauce. Grubs are savored in New Guinea and aboriginal Australia. Cultural Choices But despite its long tradition—and current favor among at least half of the world's peoples—eating insects is still rare, not to mention taboo, in the United States and Europe. One reason, DeFoliart said, is that after Europe became agrarian, insects were seen as destroyers of crops rather than a source of food. "We became invested in livestock, and bugs became the enemy," said David George Gordon, a biologist and the author of The Eat-a-Bug Cookbook. "Eco Protein" Hamburger, for example, is roughly 18 percent protein and 18 percent fat. For more insect news, scroll down.

Open 7400 Logic Competition See the 2012 Competition page for the latest news! The Open 7400 Logic Competition brings awareness to open hardware and software, and fosters understanding of the building blocks of modern integrated circuits. What can you build with logic chips? Prizes More prizes are being added as we find new sponsors. Logos Electromechanical LLC The Gadget factory Entering Entries can be posted on in our forum, on your personal blog, or even a handy how-to site like Instructables. Judging criteria and categories Entries will be judged for: Originality. Rules Any electronic circuit can be entered, but judges will favor designs where discrete logic chips are a major component. Legal stuff We want everyone to have fun, and nobody to get sued. Void where prohibited. Illustrations by Svenw1980 Rules and legal inspiration taken from the awesome 555 Contest. *Cash prize paid by PayPal or money order.

Infographic: Why Insects Are the Most Eco-Friendly Meat - Daniel Fromson The September issue of The Atlantic is live—and with it my piece on how the Netherlands is hoping to convince the world to eat mealworms and locusts. Entomophagy, as insect-eating is officially known, is actually being taken seriously these days by a hardcore group of enthusiasts and scientists around the world (coincidentally, The New Yorker also published an article on the phenomenon this week, although it focused more on fancy insect gastronomy in the U.S., as opposed to the processed insect-containing snacks invented by the Dutch). What's causing the bug boom? One big reason: as this infographic shows, insects are far more environmentally friendly than conventional meat, an advantage advocates love to flaunt. Enjoy ... and then decide whether you'll enjoy some grasshoppers. Image: Food Service Warehouse

XRobots.co.uk A Kit To Grow Bugs At Home, To Eat! As the population grows, so, too, will its hunger for meat. By 2050, meat production will need to surge by 50% to quell demand. The only problem is, producing so much (red) meat is already an environmental nightmare. And we simply might not have the resources to scale. Meanwhile, Katharina Unger is planning to invite her friends over to an insect barbecue. “Black soldier flies themselves do not eat, they just drink. Over their eight-day lifecycle, soldier flies need space to fly around, mate, and lay eggs. “There they feed on biowaste or whatever you feed them on and wriggle around for around 14 days,” Unger explains. From here, it’s bon appetit. “With my design I am proposing a new lifestyle,” she says. Read more here. [Hat tip: Tuvie]