How Cells Obtain Energy from Food - Molecular Biology of the Cell - NCBI Bookshelf. Unit 3.A Cell Structures and Transport, Enzymes and Metabolism - Seto Science @ PHS. Untitled. The effect of changing conditions in enzyme catalysis. Remember that in biology or biochemistry, the reactant in an enzyme reaction is known as the "substrate". 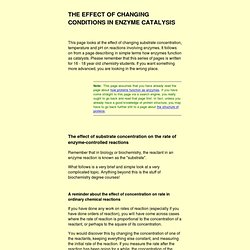 What follows is a very brief and simple look at a very complicated topic. Anything beyond this is the stuff of biochemistry degree courses! A reminder about the effect of concentration on rate in ordinary chemical reactions If you have done any work on rates of reaction (especially if you have done orders of reaction), you will have come across cases where the rate of reaction is proportional to the concentration of a reactant, or perhaps to the square of its concentration. Enzyme Kinetics. Enzymes are protein catalysts that, like all catalysts, speed up the rate of a chemical reaction without being used up in the process. 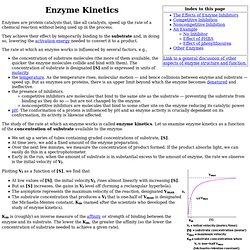 They achieve their effect by temporarily binding to the substrate and, in doing so, lowering the activation energy needed to convert it to a product. The rate at which an enzyme works is influenced by several factors, e.g., the concentration of substrate molecules (the more of them available, the quicker the enzyme molecules collide and bind with them). The concentration of substrate is designated [S] and is expressed in units of molarity. the temperature. As the temperature rises, molecular motion — and hence collisions between enzyme and substrate — speed up.

Plotting Vi as a function of [S], we find that At low values of [S], the initial velocity,Vi, rises almost linearly with increasing [S]. Untitled Document. Skip the theory and go straight to: How to determine Km and Vmax. 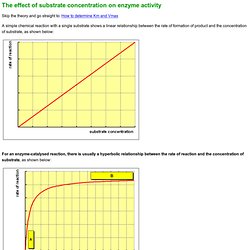 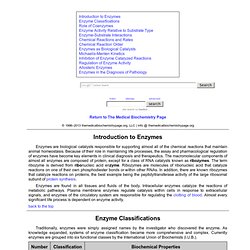 Because of their role in maintaining life processes, the assay and pharmacological regulation of enzymes have become key elements in clinical diagnosis and therapeutics. The macromolecular components of almost all enzymes are composed of protein, except for a class of RNA catalysts known as ribozymes. The term ribozyme is derived from ribonucleic acid enzyme. Enzymes are found in all tissues and fluids of the body. Back to the top Traditionally, enzymes were simply assigned names by the investigator who discovered the enzyme. These rules give each enzyme a unique number. Enzymes are also classified on the basis of their composition. The favored model of enzyme-substrate interaction is known as the induced-fit model. 1. 2. 3. 4. Biology-enzymes-rates of reaction-exercises. Energy and Diffusion. Energy and Diffusion Name: Nelly Status: student Age: 18 Location: N/A Country: N/A Date: 4/7/2004 Question: Hi, I know that diffusion is a passive transport, i.e. does not require energy expenditure. 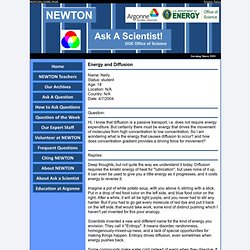 But certainly there must be energy that drives the movement of molecules from high concentration to low concentration. So I am wondering what is the energy that causes diffusion to occur? Replies: Deep thoughts, but not quite the way we understand it today. Imagine a pot of white potato soup, with you above it, stirring with a stick.

Scientists invented a new and different name for the kind of energy you envision. Some compounds make water cold instead of warm when they dissolve. Such "getting lost" is a matter of probability. There is a trade-off between energy and entropy. You can imagine ants in a windstorm trying to keep two kinds of leaves apart. If you take a bunch of atoms and tie them together in one big, rigid molecule, the atoms can no longer wiggle as freely as before. Jim Swenson. Energy in Bonds. Energy in Bonds Name: Unknown Status: educator Age: 40s Location: N/A Country: N/A Date: 1999-2001 Question: How is it that energy can be stored in chemical bonds if creating bonds releases energy and breaking bonds requires energy? 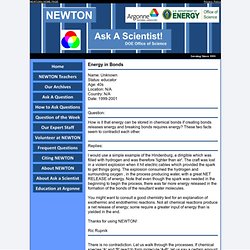 These two facts seem to contradict each other. Replies: I would use a simple example of the Hindenburg, a dirigible which was filled with hydrogen and was therefore 'lighter than air'. You might want to consult a good chemistry text for an explanation of exothermic and endothermic reactions. Thanks for using NEWTON! Ric Rupnik There is no contradiction. NCSI: Introductory. Bioenergetics. Free Online MIT Course Materials for High School. SAT Chemistry: Gibb’s Free Energy. Gibb’s Free Energy As we said earlier, the two driving forces for chemical reactions are enthalpy and entropy. 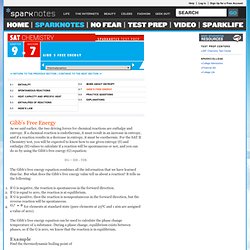 If a chemical reaction is endothermic, it must result in an increase in entropy, and if a reaction results in a decrease in entropy, it must be exothermic. For the SAT II Chemistry test, you will be expected to know how to use given entropy (S) and enthalpy (H) values to calculate if a reaction will be spontaneous or not, and you can do so by using the Gibb’s free energy (G) equation: The Gibb’s free energy equation combines all the information that we have learned thus far.