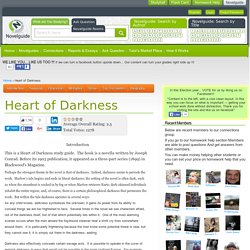 The book is a novella written by Joseph Conrad. Before its 1903 publication, it appeared as a three-part series (1899) in Blackwood's Magazine. Perhaps the strongest theme in the novel is that of darkness. Indeed, darkness seems to pervade the work. Marlow's tale begins and ends in literal darkness; the setting of the novel is often dark, such as when the steamboat is socked in by fog or when Marlow retrieves Kurtz; dark-skinned individuals inhabit the entire region; and, of course, there is a certain philosophical darkness that permeates the work. As any child knows, darkness symbolizes the unknown; it gains its power from its ability to conceal things we are too frightened to face.

Darkness also effectively conceals certain savage acts. Please click on the study guide category you wish to be displayed. Heart of Darkness Video SparkNote. Heart of Darkness Study Guide. Joseph Conrad Society (UK) - Student Resources. These pages are intended for students studying Conrad's fiction or for those seeking general guidance to some sources on a given work. 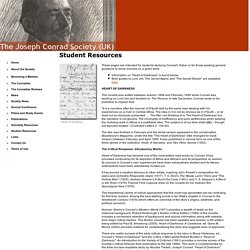 Information on "Heart of Darkness" is found below. Brief guides to Lord Jim, The Secret Agent, and "The Secret Sharer" are available here. The novella was written between autumn 1898 and February 1899 while Conrad was working on Lord Jim and blocked on The Rescue. In late December, Conrad wrote to his publisher to explain that: "It is a narrative after the manner of [Y]outh told by the same man dealing with his experiences on a river in Central Africa. The tale was finished in February and the serial version appeared in the conservative Blackwood’s Magazine, under the title "The Heart of Darkness" (title changed for book version) between February and April 1899. The Critical Response: Introductory Works. Joseph Conrad's Heart of Darkness. Few works have entertained, excited and troubled minds as much. 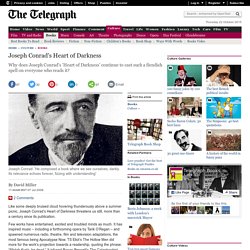 It has inspired music – including a forthcoming opera by Tarik O’Regan – and spawned numerous radio, theatre, film and television adaptations, the most famous being Apocalypse Now. TS Eliot’s The Hollow Men did more for the work’s projection towards a readership, quoting the phrase: “Mistah Kurtz, he dead.” It infused Ronan Bennett’s The Catastrophist and haunts both John le Carré’s The Constant Gardener and The Mission Song. VS Naipaul and Graham Greene were swept up by it, as were Nick Davies in writing Dark Heart along with Sven Lindquist’s Exterminate All the Brutes, Michaela Wrong’s In the Footsteps of Mr Kurtz, and Tim Butcher’s Blood River. This weekend, at the Festival Hall in London, there will be two five-hour readings of the book, complete with piano accompaniment.

Conrad’s novella takes place one night on a boat by the Thames, a mesmerising tale of one man’s search for another. The 100 best novels: No 32 – Heart of Darkness by Joseph Conrad (1899) So far, on this list, with the possible exception of Alice in Wonderland (No 18 in this series), Heart of Darkness is probably the title that has aroused, and continues to arouse, most literary critical debate, not to say polemic. 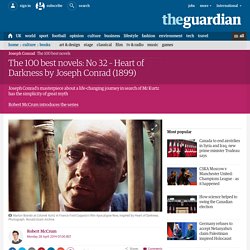 This is partly because the story it tells has the visceral simplicity of great myth, and also because the book takes its narrator (Charles Marlow), and the reader, on a journey into the heart of Africa. Our encounter with Marlow's life-changing journey begins on the Thames in London, the great imperial capital, with his recollection of "the uttermost ends of the Earth". With brilliant economy, Conrad transports him to Congo on a quest that the writer himself undertook as a young man. There, working for the shadowy, but all-powerful "Company", Marlow hears of Mr Kurtz, who is described as a first-class Company servant. A note on the text Conrad's first and second languages were Polish and French, with his third language, English, not acquired until he was 20.