Heart Surgeon Makes Shocking Confession On The Real Cause Of Heart Disease. I stumbled upon an article yesterday that I want to share with everyone. 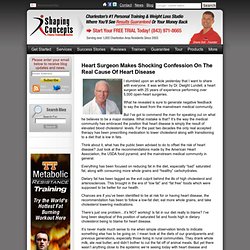 It was written by Dr. Dwight Lundell, a heart surgeon with 25 years of experience performing over 5,000 open-heart surgeries. What he revealed is sure to generate negative feedback to say the least from the mainstream medical community. But I’ve got to commend the man for speaking out on what he believes to be a major mistake. World Renown Heart Surgeon Speaks Out On What Really Causes Heart Disease. It is commonly known that physicians are often arrogant and have a big ego due to all the training t... 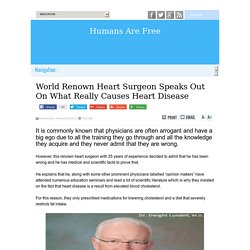 It is commonly known that physicians are often arrogant and have a big ego due to all the training they go through and all the knowledge they acquire and they never admit that they are wrong. Corruption - The Link Between Sugar, Trans Fat, and Vaccines. Zoey O’Toole, Green Med InfoWaking Times Far too many are still swooned by false promises from people with initials like “Dr.” and “CEO” in front of their names. 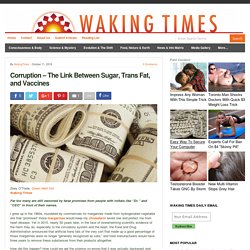 I grew up in the 1960s, inundated by commercials for margarines made from hydrogenated vegetable oils that “promised” those margarines would keep my cholesterol levels low and protect me from heart disease. Yet in 2015, nearly 50 years later, in the face of overwhelming scientific evidence of the harm they do, especially to the circulatory system and the heart, the Food and Drug Administration announced that artificial trans fats of the very sort that made up a good percentage of those margarines were no longer “generally recognized as safe,” and food manufacturers would have three years to remove these substances from their products altogether. Statin Drugs Are the Greatest Medical Fraud of All Time: Study Reports.

Heidi Stevenson, Gaia-HealthWaking Times Statins are one of the most dangerous drugs prescribed by doctors. 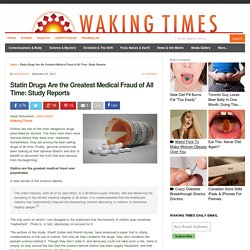 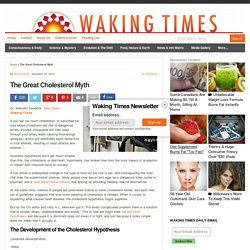 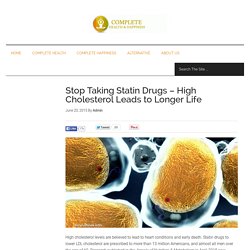 Statin drugs to lower LDL cholesterol are prescribed to more than 13 million Americans, and almost all men over the age of 60. Research published in the Annals of Nutrition & Metabolism in April 2015 now shows that, as you age, having high cholesterol is beneficial. The research, which was conducted in Japan, showed that people with the highest cholesterol levels had the lowest mortality rate from heart disease. The report states, “mortality actually goes down with higher total or low density lipoprotein (LDL) cholesterol levels, as reported by most Japanese epidemiological studies of the general population.”

Debunking Cholesterol Myths. Raluca Schachter, Guest WriterWaking Times When a big, fat lie built around such a sensitive and health threatening issue becomes way too widespread, that even the authors start to believe it, it is really hard to turn the tide without major consequences. 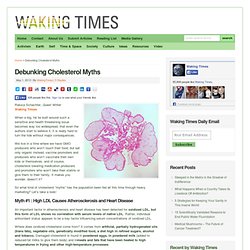 Heart Specialist Calls for Major Repositioning on Saturated Fat, as it’s NOT the Cause of Heart Disease. Dr. 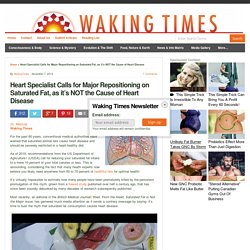 MercolaWaking Times For the past 60 years, conventional medical authorities have warned that saturated animal fats cause heart disease and should be severely restricted in a heart-healthy diet. As of 2010, recommendations from the US Department of Agriculture1 (USDA) call for reducing your saturated fat intake to a mere 10 percent of your total calories or less. This is astounding, considering the fact that many health experts now believe you likely need anywhere from 50 to 70 percent of healthful fats for optimal health! Sweet drug clears cholesterol, reverses heart disease—and was found by parents. Two parents’ quest to save their twin daughters’ lives from a rare, degenerative genetic disorder may end up saving and improving the lives of millions. 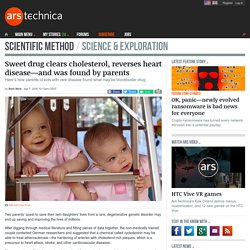 After digging through medical literature and fitting pieces of data together, the non-medically trained couple contacted German researchers and suggested that a chemical called cyclodextrin may be able to treat atherosclerosis—the hardening of arteries with cholesterol-rich plaques, which is a precursor to heart attack, stroke, and other cardiovascular diseases. The researchers, Eicke Latz at the University of Bonn and colleagues, followed up on the parents’ hypothesis and found that in mice, cyclodextrin indeed blocked plaque formation, melted away plaques that had already formed in arteries, reduced atherosclerosis-associated inflammation, and revved up cholesterol metabolism—even in rodents fed cholesterol-rich diets.

But, while cyclodextrin’s road ahead may be clear, its path to medical treatments was oddly bumpy. Prominent heart surgeon confesses to role in heart disease scam selling harmful drugs to Americans at a huge profit. HOW TO STOP A HEART ATTACK IN 1 MINUTE. Many people are unaware that a simple but powerful ingredient can prevent a heart attack in one minute. 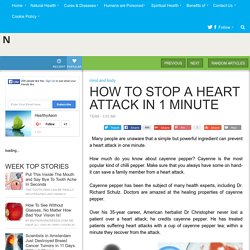 How much do you know about cayenne pepper? Cayenne is the most popular kind of chilli pepper. Make sure that you always have some on hand- it can save a family member from a heart attack. Cayenne pepper has been the subject of many health experts, including Dr. Richard Schulz. Over his 35-year career, American herbalist Dr Christopher never lost a patient over a heart attack; he credits cayenne pepper. What makes this even more relevant is the fact that these scientists base their theories about cayenne pepper on personal experience, not studies done in controlled conditions. How to Use Cayenne Pepper Cayenne pepper has at least 90,000 Scoville units, according to the Scoville Heat Units (SHU). In Just 60 Seconds Save The Life Of Someone Who Suffered A Heart Attack.

The famed herbal healer Dr. Shulze said, “If you master only one herb in your life, master cayenne pepper. It is more powerful than any other.” Dr. John Christopher believed that you can save a man’s life (who has just had a heart attack) with only one move. The famous herbalist Dr. From the healing text of Dr. NATURAL Heart Disease, High Blood Pressure Treatment. CAYENNE TURMERIC HONEY LEMON TEA. The Aspirin Alternative Your Doctor Never Told You About. Sayer Ji, Green Med InfoWaking Times Millions use aspirin daily without realizing its true dangers. 7 Suppressed Inventions That Would Have Changed The World : Waking Times. 1. Nikola Tesla (1856-1943) – Wardenclyffe Tower Project – free energy.

“Electric power is everywhere, present in unlimited quantities and can drive the world’s machinery without the need of coal, oil, gas or any other fuels.” – Nikola Tesla (1856-1943) Multi-talented Tesla cut across many disciplinary boundaries. Lymphatic System Healing. Back to Reading Room Lymphatic System - Vital to Healing & Good Health. How Yoga Heals The Diseased Heart. Sayer Ji, Green Med InfoWaking Times What if the simple act of doing yoga could heal your diseased heart? A new study titled, “Effects of Yoga in Patients with Chronic Heart Failure: A Meta-Analysis,” reveals that this ancient practice, ever-increasing in popularity in the West, has profound benefits to those who are suffering from cardiovascular disease. Previous to this study, the idea that yoga could heal a diseased heart was considered strictly theoretical, which is what motivated a team of Portuguese researchers to put the concept to the test.

The team performed a meta-analysis of the published research on the topic of how yoga might improve exercise capacity and health-related quality of life in patients with chronic heart failure. Their methodology was described as follows: The analysis found two studies that met the selection criteria, which included 30 yoga and 29 control patients. Their results were reported as follows: