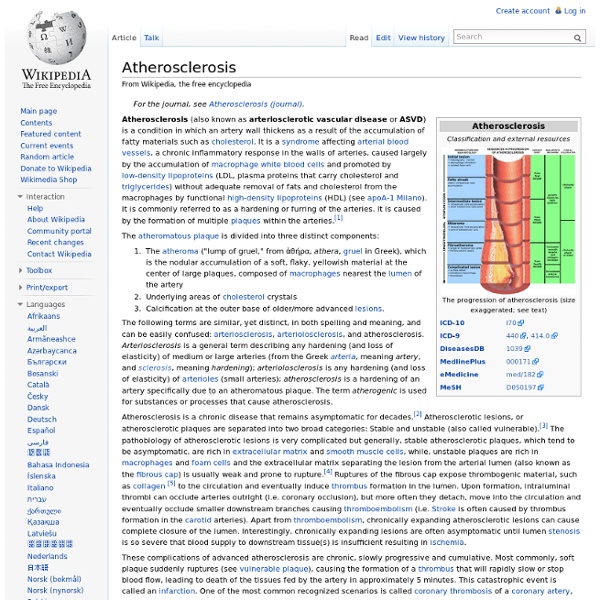 Atherosclerosis (also known as arteriosclerotic vascular disease or ASVD) is a specific form of arteriosclerosis in which an artery wall thickens as a result of the accumulation of calcium and fatty materials such as cholesterol and triglyceride. It reduces the elasticity of the artery walls and therefore allows less blood to travel through. This also increases blood pressure. It is a syndrome affecting arterial blood vessels, a chronic inflammatory response in the walls of arteries, caused largely by the accumulation of macrophages and white blood cells and promoted by low-density lipoproteins (LDL, plasma proteins that carry cholesterol and triglycerides) without adequate removal of fats and cholesterol from the macrophages by functional high-density lipoproteins (HDL) (see apoA-1 Milano). The following terms are similar, yet distinct, in both spelling and meaning, and can be easily confused: arteriosclerosis, arteriolosclerosis, and atherosclerosis. Signs and symptoms[edit]

Wound healing Within the first few minutes after the injury, platelets adhere to the site of injury ,become activated, and aggregate (join together); followed by activation of the coagulation cascade which forms a fibrin lot, stopping active bleeding (hemostasis). The speed of hemostasis depends on bloodstream levels of platelets, coagulation factors, and hormones such as oxytocin.[4] During the inflammation phase, bacteria and cell debris are phagocytosed and removed from the wound by white blood cells. Blood factors are released into the wound that cause the migration and division of cells during the proliferative phase. During wound contraction, myofibroblasts decrease the size of the wound by gripping the wound edges and contracting using a mechanism that resembles that of smooth muscle cells. During maturation and remodeling, collagen is remodeled and realigned along tension lines, and apoptosis removes unnecessary cells. Early vs cellular phase[edit] Inflammatory phase[edit] Clotting cascade[edit]

Chemotaxis Chemotaxis (from chemo- + taxis) is movement of an organism in response to a chemical stimulus. Somatic cells, bacteria, and other single-cell or multicellular organisms direct their movements according to certain chemicals in their environment. This is important for bacteria to find food (for example, glucose) by swimming toward the highest concentration of food molecules, or to flee from poisons (for example, phenol). In multicellular organisms, chemotaxis is critical to early development (e.g., movement of sperm towards the egg during fertilization) and subsequent phases of development (e.g., migration of neurons or lymphocytes) as well as in normal function. In addition, it has been recognized that mechanisms that allow chemotaxis in animals can be subverted during cancer metastasis. History of chemotaxis research[edit] On November 3, 2006, Dr. Chemoattractants and chemorepellents[edit] Bacterial chemotaxis[edit] Behavior[edit] Signal transduction[edit] Flagellum regulation[edit]

Macrophage Life cycle[edit] When a monocyte enters damaged tissue through the endothelium of a blood vessel, a process known as the leukocyte extravasation, it undergoes a series of changes to become a macrophage. Monocytes are attracted to a damaged site by chemical substances through chemotaxis, triggered by a range of stimuli including damaged cells, pathogens and cytokines released by macrophages already at the site. Function[edit] Phagocytosis[edit] Macrophages are highly specialized in removal of dying or dead cells and cellular debris. The neutrophils are at first attracted to a site, where they proliferate, before they are phagocytized by the macrophages.[6] When at the site, the first wave of neutrophils, after the process of aging and after the first 48 hours, stimulate the appearance of the macrophages whereby these macrophages will then ingest the aged neutrophils.[6] When a macrophage ingests a pathogen, the pathogen becomes trapped in a phagosome, which then fuses with a lysosome.

Atheroma In the context of heart or artery matters, atheromata are commonly referred to as atheromatous plaques. It is an unhealthy condition, but is found in most humans.[2] These anatomic lesions usually begin in some children younger than age one year and all children older than age 10 regardless of geography, race, sex, or environment. Veins do not develop atheromata, unless surgically moved to function as an artery, as in bypass surgery. The accumulation (swelling) is always in the tunica intima, between the endothelium lining and the smooth muscle tunica media (middle layer) of the artery wall. Difficulty of tracking and researching atheroma[edit] For most people, the first clinical symptoms result from atheroma progression within the heart arteries, most commonly resulting in a heart attack and ensuing debility. History of research[edit] Artery and atheroma behavior[edit] Stenosis and closure[edit] Artery enlargement[edit] Intima-media thickness measurements in the carotid artery[edit]

Hemosiderin Hemosiderin image of a kidney viewed under a microscope. The brown areas represent hemosiderin Hemosiderin or haemosiderin is an iron-storage complex. It is always found within cells (as opposed to circulating in blood) and appears to be a complex of ferritin, denatured ferritin and other material. The iron within deposits of hemosiderin is very poorly available to supply iron when needed. Hemosiderin can be identified histologically with "Prussian-blue" stain. Several disease processes result in deposition of larger amounts of hemosiderin in tissues; although these deposits often cause no symptoms, they can lead to organ damage. Iron is required by many of the chemical reactions (i.e. oxidation-reduction reactions) in the body but is toxic when not properly contained. Pathophysiology[edit] Hemosiderin often forms after bleeding (hemorrhage).[1] When blood leaves a ruptured blood vessel, the red blood cell dies, and the hemoglobin of the cell is released into the extracellular space.

Type III hypersensitivity Type III hypersensitivity occurs when antigen-antibody complexes that are not adequately cleared by innate immune cells accumulate, giving rise to an inflammatory response and attraction of leukocytes. Presentation[edit] Type III hypersensitivity occurs when there is an excess of antigen, leading to small immune complexes being formed that do not fix complement and are not cleared from the circulation. It is characterized by solvent antigens that are not bound to cell surfaces (which is the case in type II hypersensitivity). When these antigens bind antibodies, immune complexes of different sizes form. Large complexes can be cleared by macrophages but macrophages have difficulty in the disposal of small immune complexes. Such depositions in tissues often induce an inflammatory response,[3] and can cause damage wherever they precipitate. Immune Complex Glomerulonephritis, as seen in Henoch-Schönlein purpura; this is an example of IgA involvement in a nephropathy Examples[edit]