» How to Alkalise your Body – Become pH balanced » Bodhi Yoga 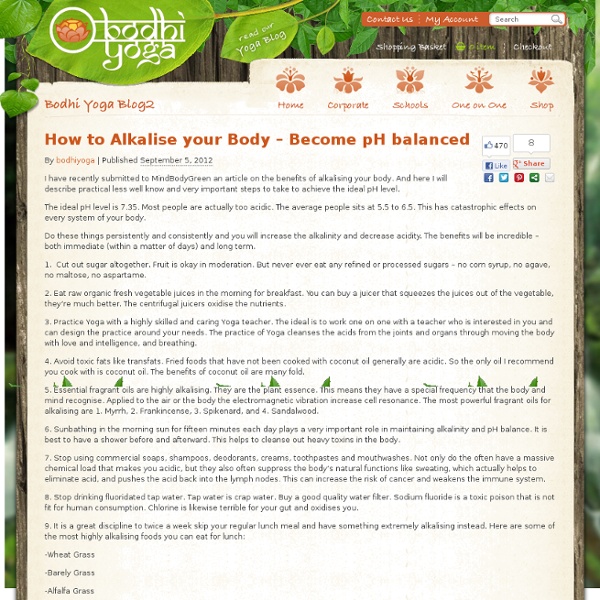 I have recently submitted to MindBodyGreen an article on the benefits of alkalising your body. And here I will describe practical less well know and very important steps to take to achieve the ideal pH level. The ideal pH level is 7.35. Most people are actually too acidic. Do these things persistently and consistently and you will increase the alkalinity and decrease acidity. 1. 2. 3. 4. 5. 6. 7. 8. 9. -Wheat Grass -Barely Grass -Alfalfa Grass -Kamut Grass -Oat Grass -Spirulina -Chlorella -Broccoli -Kelp -Cayenne -Cucumber (best taken in the morning or lunch, not at night) 10. Amazing food created by an amazing beautiful woman - the mother of my child

Medicinal Pickled garlic | Cheryl's Delights I found this recipe in the book Rosemary Gladstar’s Medicinal Herbs: A Beginner’s Guide . If you do not have this book I suggest you look into getting it. It is full of wonderful information for home herbal uses. According to Gladstar’s book, “Garlic is the herb of choice in treating colds, flu, sore throats and poor or sluggish digestion… makes a potent internal and external antiseptic, antibacterial, and antimicrobial agent effective for treating many types of infection.” Peeled garlic cloves (enough to fill a jar) Raw apple cider vinegar Raw Local Honey Fill a mason jar with garlic cloves; use any size jar you like. After 3-4 weeks, strain off the liquid(this is when you will add the honey). said,” …to be used in salad dressings and marinades. “ Oh, what about a brine for refrigerator pickle items? Place ½ the liquid in a sauce pan and add an equal amount of raw honey. Eat the garlic as you wish. I have had a few questions about garlic turning green or blue, this is a natural reaction.

NASA Admits To Chemtrails As They Propose Spraying Stratospheric Aerosols Into Earths Atmosphere It’s really amazing how many people are waking up to the fact that “chemtrails” are different from “con-trails.” What was once considered a conspiracy to many is now a fact, chemicals are constantly sprayed into our atmosphere and have been for quite some time now. Not long ago, NASA personnel gave a lecture (that was also streamed live) at their Jet Propulsion Laboratory at the California Institute of Technology. Some of you might be thinking, “Geoengineering, what is that?” These programs are also considering spraying Aluminum into the atmosphere (if not already doing it). “There might be some good reasons to think about aluminum. The idea of spraying aluminum into our atmosphere goes way back, patents exist that clearly demonstrate the consideration of such materials that include the oxides of metals which have high emissivity. “We do stuff in the stratosphere all the time off-course, so it’s not as though the stratosphere is absolutely pristine. Below is a very informative video.

Vertical Farms Sprouting Up All Over The World Could Bring Food Local Imagine walking into a high rise building only to find out it was actually a vertical farm. As odd as this sounds, this type of building is popping up in different areas of the world as the idea promises new, environmentally friendly and rapid ways to feed growing populations. The first commercial vertical farm was built in Singapore by Jack Ng who is an entrepreneur looking to supply food to Singapore’s densely populated city without having to buy a lot of highly priced land around the city. His vertical farm method is energy efficient, simple and mixes some ancient practices with new ones. The tower is modern and clear, so it looks great and allows sunlight into the the building for the plants. In March of this year the largest vertical farm is set to open up in Scranton, New York. Although sunlight is used as much as possible in vertical farms, some are using windowless operations and some with lights like LEDs that re-create sunlight. What are your thoughts on vertical farms?

Mental Health: Oppositional Defiant Disorder Why do I need to register or sign in for WebMD to save? We will provide you with a dropdown of all your saved articles when you are registered and signed in. It's not unusual for children -- especially those in their "terrible twos" and early teens -- to defy authority every now and then. They may express their defiance by arguing, disobeying, or talking back to their parents, teachers, or other adults. ODD is a condition in which a child displays an ongoing pattern of uncooperative, defiant, hostile, and annoying behavior toward people in authority. Many children and teens with ODD also have other behavioral problems, such as attention-deficit/hyperactivity disorder, learning disabilities, mood disorders (such as depression), and anxiety disorders. What Are the Symptoms of Oppositional Defiant Disorder? Symptoms of ODD may include: In addition, many children with ODD are moody, easily frustrated, and have a low self-esteem. Continue reading below...

Observations On the Dose and Administration of Ascorbic Acid... Frederick R. Klenner, M.D., F.C.C.P. [J.A.N.] Editor’s Note: Because of the unusually high amounts of ascorbic acid used in Dr. “To the Editor of the ICAN Journal: This will confirm that all ‘quantity’ factors given in my paper are correct and can be confirmed from hospital and medical office records. “Recently the FDA has published a ‘warning’ that too much soda-ascorbate might be harmful, referring to the sodium ion. Signed: FRED R. Ancient History and Homespun Vitamin C Therapies Folklore of past civilizations report that for every disease afflicting man there is an herb or its equivalent that will effect a cure. Early specifications, action and dosages for administrations. To understand the chemical behavior of ascorbic acid in human pathology, one must go beyond its present academic status either as a factor essential for life or as a substance necessary to prevent scurvy. Ascorbic acid has many important functions. Flexible dosage standards explained as minimal standards.

Injectable Vitamin C: Effective Treatment for Viral and Other Diseases Plasma Vitamin C Levels Are Decreased and Correlated With Brain Damage in Patients With Intracranial Hemorrhage or Head Trauma + Author Affiliations Correspondence to Maria Cristina Polidori, MD, Institute of Physiological Chemistry I, Heinrich-Heine University, D-40225 Düsseldorf, Germany. E-mail polidori@uni-duesseldorf.de Abstract Background and Purpose—Free radical hyperproduction may play an important role in brain hemorrhage and ischemia/reperfusion injury. Methods—We measured plasma levels of vitamin C (ascorbic acid, AA), uric acid (UA), vitamin E (α-tocopherol), and ubiquinol-10 in 13 patients with ICH and 15 patients with HT on the day of the brain injury and subsequently every other day up to 1 week. Results—ICH and HT patients had significantly lower plasma levels of AA compared with healthy subjects, in contrast to plasma levels of UA, α-tocopherol, and ubiquinol-10. Conclusions—These findings suggest that a condition of oxidative stress occurs in patients with head trauma and hemorrhagic stroke of recent onset. Key Words: One possible consequence of excess ROS formation is lipid peroxidation. Results

A Randomized Trial of Replacement Antioxidant Vitamin Therap... : Journal of Trauma and Acute Care Surgery Vitamin C and human wound healing Clinical studies provide evidence that wound healing in subjects judged not deficient in vitamin C can be significantly accelerated with supplements of this nutrient above the recommended daily allowance (RDA). The authors administered daily dosages of 500 to 3,000 mg., which is roughly 8 to 50 times the RDA of 60 mg., to subjects recovering from surgery, other injuries, decubital ulcers, and leg ulcers induced by hemolytic anemia. Genetic impairment of collagen synthesis has also been observed to be responsive to ascorbic acid supplementation in an 8-year-old boy with Type VI Ehlers-Danlos syndrome. Four grams of ascorbic acid daily produced a significant improvement in the quality of newly synthesized collagen but did not alter that formed prior to the supplementation of C. The combined evidence in this review provides a substantial base for further research, both clinical and experimental trials, concerning the interrelationships between vitamin C and the body's healing potential.

Antioxidant therapy in intensive care : Current Opinion in Critical Care Purpose of review: This review intends to summarize the recent findings regarding the presence of increased oxidative stress in critically ill patients and its potential pathophysiologic role, as well as the results of recent clinical trials of antioxidant therapies. Recent findings: Several lines of evidence confirm the increase in oxidative stress during critical illness. The oxidative damage to cells and tissues eventually contributes to organ failure. Prophylactic administration of antioxidant vitamins or glutamine, incorporated in the nutritional support or given as separate medications, efficiently attenuates the oxidative stress and in some studies improves the outcome of critically ill patients. Few data on the effects of N-acetylcysteine or trace elements have been published during the last two years. Summary: Patients at risk of organ failure could benefit from the early adjunction of antioxidant treatment, including vitamins and glutamine.

Antioxidant Micronutrients in Major Trauma and Burns: Evidence and Practice Mette M. Berger, MD, PhD Correspondence: Mette M Berger, MD, PhD, Department of Intensive Care Medicine and Burns Center, CHUV-BH08.660, CH-1011 Lausanne, Switzerland. Electronic mail may be sent to Mette.Berger@chuv.ch. There has been a growing interest in micronutrients as a result of their essential role in endogenous antioxidant defense mechanisms and immunity. Critically ill burn and trauma patients are characterized by an increased free radical production, which is proportional to the severity of the injury. American Society for Parenteral and Enteral Nutrition