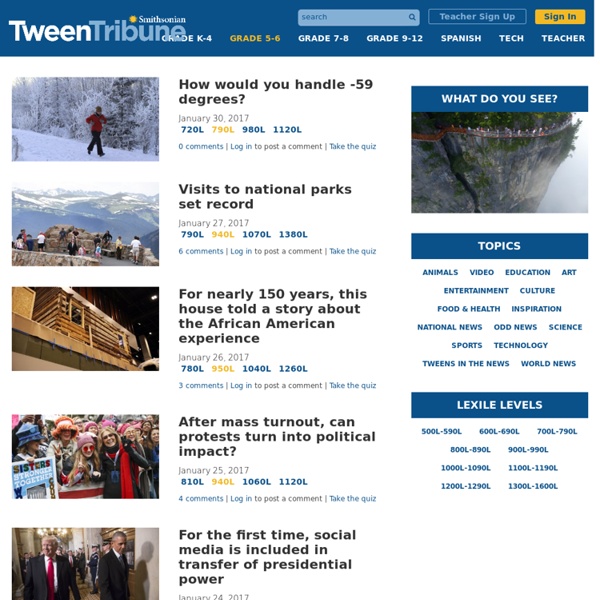 Fantastic Comprehensive List of Assessment Tools for Teachers About ETR Community EdTechReview (ETR) is a community of and for everyone involved in education technology to connect and collaborate both online and offline to discover, learn, utilize and share about the best ways technology can improve learning, teaching, and leading in the 21st century. EdTechReview spreads awareness on education technology and its role in 21st century education through best research and practices of using technology in education, and by facilitating events, training, professional development, and consultation in its adoption and implementation.

Current Events and Literacy for Middle Schools TIME Edge is the premier digital news source developed specifically for middle school students. Build student literacy skills with close-reading assignments. Get ideas for tying history and science lessons to current events. Measure student comprehension with ready-to-use assessments. Tips on how to make a video news report Do you want to make a TV news report but have no idea where to start? Watch this video to see how a group of students, with help from the BBC's Sophie Long, go about it and read the advice below. How to make a video news report What's the story? Before starting any news report, the most important point to remember is: Keep it simple. Think about how can you tell the story in the most engaging way, without making it too complicated.

New Zealand says no to Jedis Mark Hamill, left, Carrie Fisher and Harrison Ford in a scene from "Star Wars." (20th Century-Fox Film Corp. via AP) New Zealand's Jedi Society was established in April 2014. According to the society's Web site, it was established to help aid the "advancement of the Jedi," to promote "understanding and knowledge of the Force" and to "enable eternal vigilance of the Sith." Unfortunately, it's already hit a significant hurdle. New Zealand's Department of Internal Affairs recently denied its request for tax-free status, as it is not a religion. According to the Australian Associated Press, the department's charity services board found that the society did not "promote a moral or spiritual improvement," one requirement needed for a group to claim charitable status on religious grounds.

Report Cards As part of the state accountability system, reflected in Wisconsin’s approved ESEA Flexibility Request, the Department of Public Instruction (DPI) has produced report cards for every district and school in Wisconsin. These Report Cards provide data on multiple indicators for four Priority Areas: Student Achievement – performance on the WKCE and WAA-SwD in reading and mathematics Student Growth – improvement over time on the WKCE in reading and mathematics Closing Gaps – progress of student subgroups in closing gaps in reading and mathematics performance and/or graduation rates On-track and Postsecondary Readiness – performance on key indicators of readiness for graduation and postsecondary pursuits, whether college or career Districts and schools receive a score from 0-100 for each Priority Area. Scores are included on each Report Card. The longer (18-page) Report Card Detail includes the data factored into the scores.

Literacy in the Digital Age: Five Sites With High-Quality Informational Text Editor’s Note: Teaching Channel has partnered with Student Achievement Partners on a blog series about digital literacy tools and their effective use by educators. One of the most exciting shifts in the Common Core State Standards is the increased use of content-rich, informational text. Let’s think about this. As professionals, how often do we read texts that are outside of our comfort zone? Current Events Classroom About Current Events Classroom The Current Events Classroom is a collection of timely and relevant brief lesson plans that assist K-12 educators in teaching news topics and other issues of the day. Each lesson helps students analyze the topic through an anti-bias, diversity and social justice lens. Featured Lesson (Download PDF).

TV news report project You are hired as a TV anchorman/ anchorwoman by the BBC. Present a TV news report! Carte des compétences et connaissances à maîtriser pour cette séquence projet: Nazi banner unfurled for WWII film sparks anger in France (and selfies) “There was nothing around to explain what was going on. The scene was just surreal.” He added that tourists began taking selfies in front of the banner, which will be used in a film adaptation of French author Joseph Joffo’s memoir, A Bag of Marbles, about growing up during the Holocaust.

Communication Approaches That Strengthen Working Relationships In the July 2013 issue of Leader’s Edge, I suggested that business performance could be explained using the following formula: Talent + Energy + Time = Results Consequently, communication approaches that ruin working relationships waste the time, energy, and talent in an organization.

8 High-Quality OER Collections Resource Spotlight 8 High-Quality OER Collections Finding high-quality open educational resources used to be a challenge, but a number of curated OER collections have made the task much easier for educators. Here are eight sources that can help. 1. About this Collection - Country Studies Contains the electronic versions of 80 books previously published in hard copy as part of the Country Studies Series by the Federal Research Division. Intended for a general audience, books in the series present a description and analysis of the historical setting and the social, economic, political, and national security systems and institutions of select countries throughout the world. Most books in the series deal with a single foreign country, but a few cover several countries or a geographic region. The series includes several books on countries that no longer exist in their original configuration—such as Czechoslovakia, East Germany, the Soviet Union, Sudan, and Yugoslavia.

E-waste, recycling, and sustainability - Geography (9,10) - ABC Splash - A TV monitor lies amongst electronic trash. Playing on it are images of recycling trash being picked up by truck and sorted and processed in plants.TANYA HA, REPORTERRight now, you are watching trashy television and I mean that in the nicest possible way. But the way we sort the stuff we want from the stuff we don't all boils down to some beautiful simple physics in action, starting with size and weight.Rubbish passes over a vibrating conveyer belt, some of it falling off.TANYA HAThis incline of vibrating, spinning rubber discs acts like a giant sieve. The lightweight paper and cardboard moves up, heavier, more compact bottles and cans move down.Tanya Ha lowers a textbook. She stands before a white board with algebraic expressions written over it.TANYA HAIf you were paying attention in high school physics you'll know that some metals and their alloys, like iron and steel, are innately magnetic.

Appeals court overturns approval of pesticide over concerns about declining honey bee numbers - 9/10/2015 10:33:13 PM The U.S. Environmental Protection Agency did not adequately study the pesticide sulfoxaflor before approving its use in 2013 on a wide variety of crops, including citrus and cotton, the 9th U.S. Circuit Court of Appeals said. Initial studies showed sulfoxaflor was highly toxic to honey bees, and the EPA was required to get further tests, Circuit Judge Mary Schroeder said. "In this case, given the precariousness of bee populations, leaving the EPA's registration of sulfoxaflor in place risks more potential environmental harm than vacating it," she wrote.