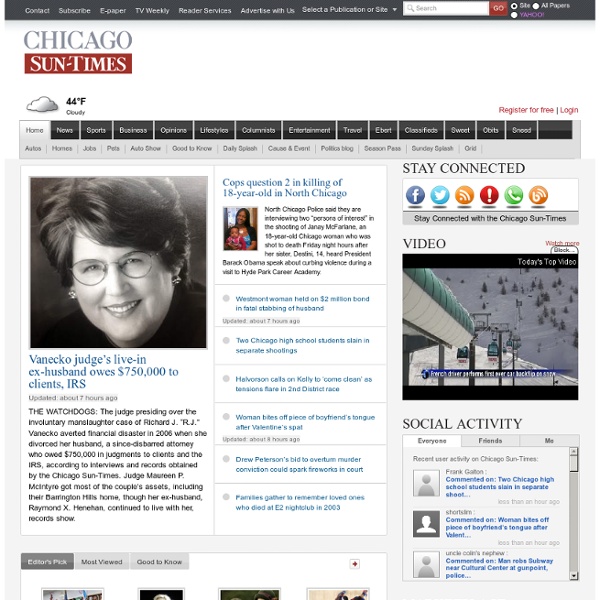 Chicago Tribune Chicago News, Events and Culture | Chi-Town Daily News Alex Jones' Infowars: There's a war on for your mind! The SouthtownStar web - Jun 03, 2013 Opinion ' After 9/11, the US created its NCTC and, since, had no further terrorist attacks on its soil; ergo, we must have the NCTC, and there will be no further terrorist attacks in India as well.' Ajai Sahni | Mon Jun 03, 2013 State Snippets Hospitals report an Angelina Jolie effect, as panic calls pour in from women wanting to know if they too need to follow the Hollywood star to ward off breast-cancer Madhavi Tata | Mon Jun 03, 2013 Media Interaction This time the PM ducks the question about a third term, but says " the obstructionist role of the opposition has increased enormously in recent years." Media | Fri May 31, 2013 The Maoists want a military conflict as it brings more adivasis into their fold. Chitrangada Choudhury , Ajay Dandekar | Fri May 31, 2013 It seems then that the only difference between terrorism and murder is contingent on whether the culprit is Muslim or whether the victim is Muslim. Ali Khan Mahmudabad | Fri May 31, 2013 View From Britain George Monbiot | Fri May 31, 2013

Chicago Journal TV NEWS : Search Captions. Borrow Broadcasts : TV Archive : Internet Archive CNN (San Francisco) quote eye favorite 0 quote 22 if you think dog whistles to neo nazi, and eric erickson or the adl is represented by the mainstream media, that's somewhat bizarre. the bottom line is this. donald trump is the presumptive gop nominee for the presidency of the united states. and we would like to see him speak out with the same energy that he brings to the campaign trail, when he calls out hillary clinton, or his gop rivals, bring that energy to call out white supremacists. bring that energy to call out hate and make it clear it has nothing do with making america great again. >> all right, jonathan greenblatt, thank you so much for your time. with me now to talk more about this, boris epstein and jason johnson, politics editor for the root.com, welcome. boris, you're trump supporter, and you are also jewish. is this an overreaction?