An illegal “tele-casino” in Japan will not look different to a regular (and perfectly legal) Internet café – in fact, that is what most “tele-casinos” purport to be. A dozen or so computer monitors display video feeds from casinos in the Philippines or Macao – where gambling is legal – and each patron can sit down in front of it and gamble privately, as each is separated by a partition. [via Asahi / image via Shutterstock] inShare0. Sleep deprivation has genetic consequences. WASHINGTON – Hey, you, yawning at 2 in the afternoon. 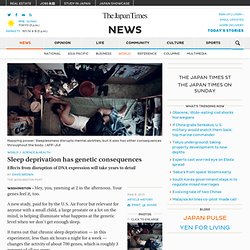 Your genes feel it, too. A new study, paid for by the U.S. Air Force but relevant for anyone with a small child, a large prostate or a lot on the mind, is helping illuminate what happens at the genetic level when we don’t get enough sleep. It turns out that chronic sleep deprivation — in this experiment, less than six hours a night for a week — changes the activity of about 700 genes, which is roughly 3 percent of all we carry.

About one-third of the affected genes are ramped up when we go with insufficient sleep night after night. Among the genes disturbed by sleep deprivation are ones involved in metabolism, immunity, inflammation, hormone response, the expression of other genes and the organization of material called chromatin on chromosomes. The experiment’s results are “consistent with what we know from animal studies,” said James Krueger, a sleep researcher at Washington State University. Cognitive, heart troubles. Sleep's Surprising Effects on Hunger. Business insider. The wall street journal Japan. Science - Latest Technology News and Pictures. أرشيف.

Natural Resources and the Environment - Dot Earth Blog - NYTimes.com. CNN. More than 50 billion of 3M's Post-it notes are sold every yearHit product reached market 12 years after it was invented3M employee, Art Fry realized potential of Post-it Notes in churchOnce the product was released in 1980, it spread "like a virus," he recalls St Paul, Minnesota (CNN) -- It's been described as the solution to a problem nobody realized existed. 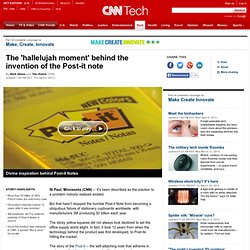 But that hasn't stopped the humble Post-it Note from becoming a ubiquitous fixture of stationery cupboards worldwide, with manufacturers 3M producing 50 billion each year. The sticky yellow squares did not always look destined to set the office supply world alight. In fact, it took 12 years from when the technology behind the product was first developed, to Post-its hitting the market. The story of the Post-it -- the self-attaching note that adheres in such a way that it can be removed without causing damage -- begins in 1968. We wanted to develop bigger, stringer, tougher adhesives. 'Credit card computer' enhances learning. Business Insider. Huffington Post.

BBC News. The UK government is trying to encourage more people to recycle their waste and reduce the UK's waste mountain. 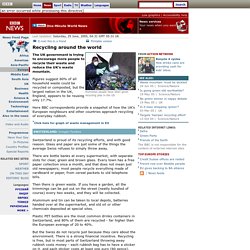 Figures suggest 60% of all household waste could be recycled or composted, but the largest nation in the UK, England, appears to be reusing only 17.7%. Here BBC correspondents provide a snapshot of how the UK's European neighbours and other countries approach recycling of everyday rubbish. SWITZERLAND: Imogen Foulkes Switzerland is proud of its recycling efforts, and with good reason. Glass and paper are just some of the things the average Swiss refuses to simply throw away. There are bottle banks at every supermarket, with separate slots for clear, green and brown glass. Then there is green waste. Aluminium and tin can be taken to local depots, batteries handed over at the supermarket, and old oil or other chemicals deposited at special sites. But the Swiss do not recycle just because they care about the environment. New York Times.