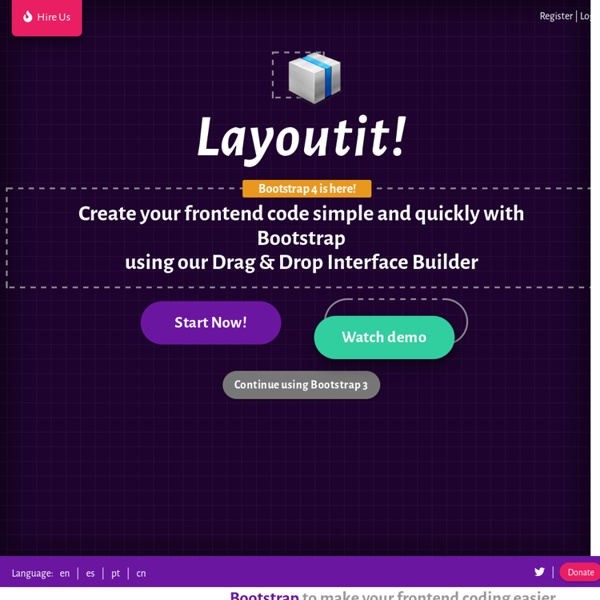 Bootstrap Form Builder Rendered source of your form: About Created By Adam Moore (@minikomi) to help take the stress out of writing all that markup to get bootstrap forms together. The original version of this was a big jQuery spaghetti mess, so as of March 2013 it has been rewritten using backbone.js and takes advantage of underscore.js templates. If you have a problem, or want a specific snippet added please check out the github project.

Responsive CSS Framework Comparison: Bootstrap, Foundation, Skeleton Bootstrap 4.0.0-alpha is a fairly large update to the framework. It has dropped Less support in favor of Sass, converted from px-based to rem-based sizing, improved its grid system, and dropped IE8 support. Also, all its JS plugins were re-written in ES6, it now uses a customized reset CSS file called Reboot, and offers flexbox support via a Sass boolean variable.

❍ IcoMoon IcoMoon is striving to build and provide the best iconography and icon management tool for perfectionists. IcoMoon's icon library features only the very best icon sets out there. All of our icons are designed on a precise pixel grid. The IcoMoon app lets you build and use your own icon sets in many different formats including SVG, Polymer, PDF, XAML, CSH, icon font or simple PNG/CSS sprites. IcoMoon was first built and released back in the November of 2011. Since its release, it has changed the way icon fonts (and icons in general) are being used in web today.

The 30 Best Joomla Extensions Your Website Shouldn't Be Without - Joomla Guides - Joomla Central - Free Joomla Templates, Guides, Tips and Downloads We feature 30 of the very best Joomla extensions that every website shouldnt be without, along with what they are and where to get them. There are over 8000 Joomla extensions available There are over 8000 Joomla extensions to date making Joomla by far the most expandable Content Management System available. But out of them all, how do you know which ones are the best for your website, and where do you find them? We've put together a list of the very best Joomla extensions to help get you up and running in the best way possible. 50 Awesome Twitter Bootstrap Templates Advertisement In designing websites today, one of the must have frameworks is the twitter bootstrap. To those who do not have an exact idea about the benefit of this framework, but are familiar with the social media account – twitter, it has nothing to do with the boot laces. It usually contains non-responsive and responsive grid layouts, JavaScript, components, and base CSS. It allows development of website in a quick and easy manner since this is a collected elements of CSS and JavaScript.

56 Pure CSS Effects Javascript Alternatives Including Demos Cascading Style Sheet (CSS) is a document format which provides a set of style rules which can then be incorporated in an XHTML or HTML document. It is a means to separate web content from formatting and presentation information. Although CSS is generally considered a simple and straightforward language, sometimes it requires creativity, skill and a bit of experimentation. The good news is that designers and developers worldwide often face similar problems and choose to share their insights and workarounds with the wider community. This is where we come in.

Bootstrap 4 alpha 19 Aug 2015 Today is a special day for Bootstrap. Not only is it our fourth birthday, but after a year of development, we’re finally shipping the first alpha release of Bootstrap 4. Hell yeah! Bootstrap 4 has been a massive undertaking that touches nearly every line of code. HttpCoreModule WARNING: this article is obsoleted. Please refer to for the latest official documentation. Controls core features of Nginx's HTTP processing. aio This directive is usable as of Linux kernel 2.6.22.

38 Useful Resources for Twitter BootStrap Fans Bootstrap is a responsive design, HTML, Javascript and CSS framework which has alot of the design elements that you would require to get a polished product off the ground quickly. It’s a great way to get your project started without sourcing and integrating multiple third party projects, and still look good. As an open source project Bootstrap continues to evolve, with 2.2.1 the latest version released recently, it has significant grounding in the development community, and is described by some as rapidly becoming the ‘jQuery of HTML frameworks’. Within a few months of its launch, the project grew to be the most popular project on the world’s largest social coding service, Github, and for good reason – it is a formidable framework for rapid development.

Nifty Modal Window Effects A set of experimental modal window appearance effects with CSS transitions and animations. View demo Download source Today we want to share some ideas for modal window effects with you. There are infinite possibilities for transitioning the appearance of a dialog box and we wanted to provide some ideas of how to show dialog boxes and provide some inspiration. The idea is to have a trigger button (or any element) which will make a modal window appear on click using a simple transition (or animation). Please note: this only works as intended in browsers that support the respective CSS properties.

Very useful. Can be used to quickly build working prototypes or simple sites based on the bootstrap framework by jjsanto Sep 23