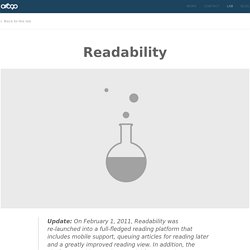 In addition, the platform provides a unique model for supporting publishers and writers through your reading activity. Visit to learn more. Reading anything on the Internet has become a full-on nightmare. As media outlets attempt to eke out as much advertising revenue as possible, we’re left trying to put blinders on to mask away all the insanity that surrounds the content we’re trying to read. It’s almost like listening to talk radio, except the commercials play during the program in the background. Recently, Mandy Brown wrote a wonderful article for A List Apart called In Defense Of Readers. Despite the ubiquity of reading on the web, readers remain a neglected audience. API Performance Monitoring · Runscope. Supercharge your API workflow. Alin Constantin's Home Page. Scott Hanselman's 2014 Ultimate Developer and Power Users Tool List for Windows.

Chocolatey Gallery. Help your users record and report bugs with the Problem Steps Recorder. Boxstarter. .NET Analyzers. Splunk For Application Development, DevOps and APM. Splunk® software allows you to quickly identify and pinpoint code-level issues at any stage of the development and release process. 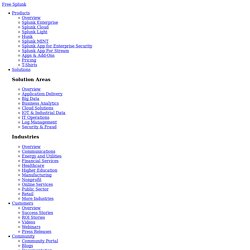 Only Splunk enables you to: Find and fix bugs quickly so you can ship product fasterGain insights into application usage and user behaviorGet real time, mission-critical visibility into every step, system and process involved in building, testing and shipping new products to your customers Download Splunk for free. You'll get a Splunk license for 60 days and can index up to 500 megabytes of data per day. After that, you can convert to a perpetual free license or purchase a license to continue using the expanded functionality designed for multi-user deployments. Refactoring Essentials for Visual Studio. Code-cracker/code-cracker. WebSharper - Downloads. 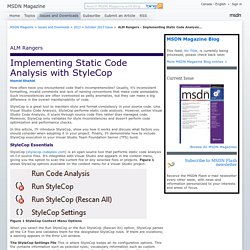 Usually, it’s inconsistent formatting, invalid comments and lack of naming conventions that make code unreadable. Such inconsistencies are often overlooked as petty anomalies, but they can make a big difference in the overall maintainability of code. StyleCop is a great tool to maintain style and format consistency in your source code. Like Visual Studio Code Analysis, StyleCop performs static code analysis. However, unlike Visual Studio Code Analysis, it scans through source code files rather than managed code.

In this article, I’ll introduce StyleCop, show you how it works and discuss what factors you should consider when adopting it in your project. SideWaffle Template Pack for Visual Studio. Cassette Asset bundling for .NET web apps. Deployment for report. Robconery-massive. TheJoyOfCode. Visual Studio Feeds. Wakanda. Web Developer Checklist. Install Sonar. It has been a very long time since I post anything. 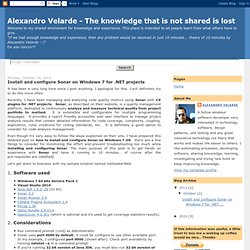 I apologize for this. I will definitely try to do this more often. Recently, I have been managing and analyzing code quality metrics using Sonar with C# plugins for .NET projects. Sonar, as described on their website, is a quality management platform, dedicated to continuously analyze and measure technical quality from project portfolio to method. It is extensible and configurable for multiple programming languages. Even though it’s very easy to follow the steps explained on their site, I have prepared this detailed post on how to install and configure Sonar on Windows 7 OS. there are a few things to consider for minimizing the effort and prevent troubleshooting too much while installing and configuring Sonar. Let’s get down to business with my sample solution named JobSeekerWeb: CodeSmith Tools. 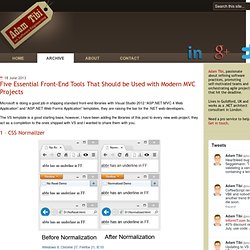 The VS template is a good starting base, however, I have been adding the libraries of this post to every new web project, they act as a completion to the ones shipped with VS and I wanted to share them with you. 1 – CSS Normalizer One common problem we used to face is the fact that every browser has different default settings. If you don’t explicitly style an element (a tag), it may not look the same cross-browsers. The image above shows the following code with and without resetting: Today, the de facto CSS resetting tool is Normalize.css, it does much more than my demo above to target cross-browsers differences. PathEnq. HtmlClipper – save html content from any website  StyleCop - Home.