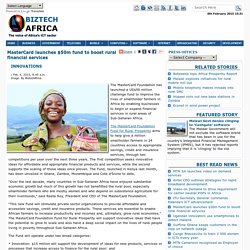 Image: By BiztechAfrica MasterCard launches $50m fund to boost rural financial services The MasterCard Foundation has launched a US$50 million challenge fund to improve the lives of smallholder farmers in Africa by enabling businesses to begin or expand financial services in rural areas of Sub-Saharan Africa. The MasterCard Foundation Fund for Rural Prosperity aims to help give a million smallholder farmers in 24 countries access to appropriate savings, credit and insurance services, through two competitions per year over the next three years. The first competition seeks innovative ideas for affordable and appropriate financial products and services, while the second supports the scaling of those ideas once proven. “This new Fund will stimulate private sector organizations to provide affordable and accessible savings, credit and insurance products.

Facebook Is Testing A Simple App For Low-End Android Phones. Not content with spinning out apps for stickers inside Messenger, Groups and new addition Rooms, Facebook has launched another standalone app. 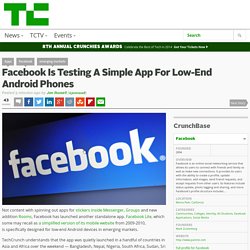 Facebook Lite, which some may recall as a simplified version of its mobile website from 2009-2010, is specifically designed for low-end Android devices in emerging markets. TechCrunch understands that the app was quietly launched in a handful of countries in Asia and Africa over the weekend — Bangladesh, Nepal, Nigeria, South Africa, Sudan, Sri Lanka, Vietnam and Zimbabwe to be precise — where it is being testing with a view to further expansions. That said, a wider launch is not a certainty and Facebook could quietly can the project if it doesn’t believe it is worth pursuing. The app has been built to accommodate low-end and dated Android devices, and users who are on 2G/poor quality internet connections. Why is Facebook launching yet another app? Businessinsider. Internet.org by Facebook. Google internet balloons and drones could boost GDP by trillions and save millions of lives. TweetExpanding broadband access through wireless networks would be cheaper than building fixed wireline networks, however the benefits would be smaller, according to the Copenhagen Consensus latest study. 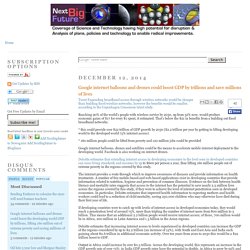 Reaching 90% of the world’s people with wireless service by 2030, up from 32% now, would produce economic gains of $17 for every $1 spent, it estimated. That’s below the $21 in benefits from a building out fixed broadband networks. * this could provide over $22 trillion of GDP growth by 2030 ($2.2 trillion per year by getting to lifting developing world to the developed world 75% internet access) * 160 million people could be lifted from poverty and 120 million jobs could be provided Google internet balloons, drones and satellites could be the means to accelerate mobile internet deployment to the developing world.

The internet provides a route through which to improve awareness of diseases and provide information on health treatments. In the race between Google and Facebook over global connectivity, everyone is winning. Gaming execs:Join 180 select leaders from King, Glu, Rovio, Unity, Facebook, and more to plan your path to global domination in 2015. 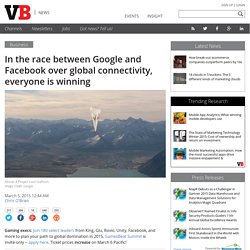 GamesBeat Summit is invite-only -- apply here. Ticket prices increase on March 6 Pacific! BARCELONA, Spain – There are still 4 billion people in the world who are not online. Figuring out how to address that problem and why it matters was one of the main themes this week at the Mobile World Congress in Barcelona. Connectivity is not binary, the network is never neutral. Is Facebook Zero the Future of Public Internet Access? Access to information is both empowerment and development. 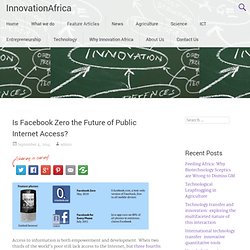 When two thirds of the world’s poor still lack access to the Internet, but three fourths have a mobile phone, it makes sense to try to capitalize on mobile technology in order to increase access and connectivity. Enter Facebook Zero The advantage of Facebook Zero is in the name; by waiving regular data charges, Facebook Zero is “zero rate” access to the world’s most popular social media site, which has great benefits for everyone. Facebook cleverly tapped into a new clientele: the billions of poor people in the developing world who already own mobile phones but cannot fork out large sums for internet services.

According to Facebook, the launch of the modified site was an effort to “make the world more open and connected” – precisely the same goal of those concerned with pubic access options in development. Does Facebook Zero Increase Internet Access? Full Facebook usage (vs. Is Facebook Zero A Community Space? Introducing Android One. Google Announces Android One Standard for Affordable Devices. Google has revealed a new program called Android One which will specify a set of hardware and software guidelines for device makers to adhere to if they wish to attain official ‘Android One’ status. 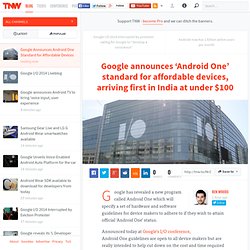 Announced today at Google’s I/O conference, Android One guidelines are open to all device makers but are really intended to help cut down on the cost and time required to build an affordable smartphone in a short space of time. For the end user, Android One will mean a more unified Android experience free from manufacturer’s own skins, like TouchWiz or Sense, fewer pre-installed apps and timely software updates.

Essentially, the software will be plain Android, but will include the option for OEMs to include locally relevant software tweaks. It’s a smart move from Google. One of the biggest criticisms of Android historically has been the fragmented software and hardware around the platform, particularly at the lower end of the value chain. In the Developing World, Smart Design Can Make the Difference Between Life and Death. The Passive Vaccine Storage Device from Global Good stays cold for more than a month (top view). 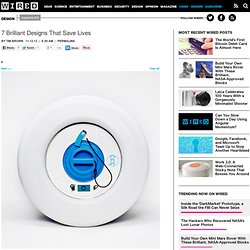 Christian Weber. Mobile phones bring revolution to developing world. We all know how fast technology can change markets and businesses. 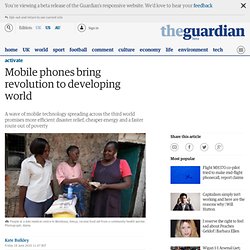 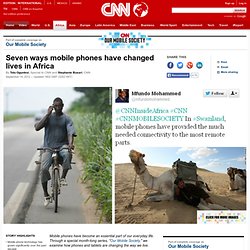 Through a special month-long series, "Our Mobile Society," we examine how phones and tablets are changing the way we live. Lagos, Nigeria (CNN) -- A little over a decade ago there were about 100,000 phone lines in Nigeria, mostly landlines run by the state-owned telecoms behemoth, NITEL. Today NITEL is dead, and Nigeria has close to 100 million mobile phone lines, making it Africa's largest telecoms market, according to statistics by the Nigerian Communications Commission.

Across the rest of the continent the trends are similar: between 2000 and 2010, Kenyan mobile phone firm Safaricom saw its subscriber base increase in excess of 500-fold. Open Mic: Mobile devices in Kenya. How Mobile Technology is Transforming Africa. Profile on TED.com. I’ve Seen the Future (in Haiti)