Game Development. Game Developers. Ward7299. Video Game Development. Gamedev - game development, programming, math, art, collaboration. 5 Simple Ways To Improve Game Menus. This small article is mainly targeted at hobby game developer. I think that the title menu of your game should receive proper attention, since it is the first screen of your game the user will ever see. And we don’t want our user to start with a strange feeling, don’t we? In this article I will show you 5 really simple ways to improve your title menu without any design skill at all.

Assumptions Let us assume that our title menu should feature the following 4 functionalities: GameDev.net - all your game development needs. How indie gaming is reviving the Britsoft s. PlayStation killed Britsoft. 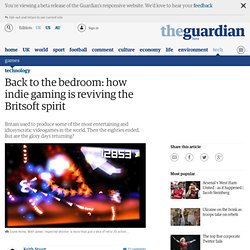 We didn't realise it at the time, but it took a cold, technological scythe to the British development community. And Lara Croft, that gloating figurehead of the PlayStation Generation, once viewed as a symbol of this region's success and creativity, should now been read as a harbinger of doom. Because, nothing was ever the same again. Of course, PlayStation didn't destroy the whole business of developing major videogames in the UK – that's still happening, though largely for foreign paymasters. But the era of expensive team-based 3D game production ushered in by Sony's original machine effectively ended the peculiarly British scene of the eighties. Later came the dominant bad boys of the Amiga era - Sensible Software and the Bitmap Brothers - with their hyper-polished, subtly anarchic 2D masterpieces. 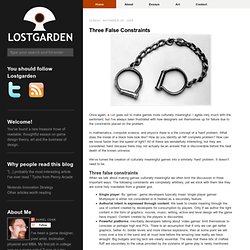 I agree very much with the sentiment, but I've always been frustrated with how designers set themselves up for failure due to the constraints placed on the problem. In mathematics, computer science, and physics there is a the concept of a 'hard' problem. What does the inside of a black hole look like? How do you identify an NP complete problem?

2D Vector Graphics for Unity - Ragespline.com. Tutorials. More Design Patterns. Writing Serialised Data to a String Instead of a File in C# Instead of writing the serialised data to a file, which can be done using using (Stream s = File.Create("foo.xml")), you might want to have just the string – maybe because you want to send it to a server? 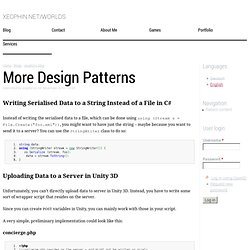 You can use the StringWriter class to do so: string data;using (StringWriter stream = new StringWriter()) { xs.Serialize (stream, foo); data = stream.ToString();} Uploading Data to a Server in Unity 3D Unfortunately, you can’t directly upload data to server in Unity 3D. Since you can create POST variables in Unity, you can mainly work with those in your script. A very simple, preliminary implementation could look like this: concierge.php <? NetworkSave.cs Of course, this design allows for quite some flexibility, since it decouples the storage of data from the game logic. Gamer To Game Developer. Make a Videogame from Scratch - Tutorials. Indie-Resource.com. So You Want to Be a Game Programmer? I often get email from people looking to get their first job in the game industry asking me for advice. 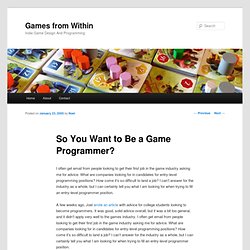 What are companies looking for in candidates for entry-level programming positions? How come it’s so difficult to land a job? I can’t answer for the industry as a whole, but I can certainly tell you what I am looking for when trying to fill an entry-level programmer position. A few weeks ago, Joel wrote an article with advice for college students looking to become programmers. It was good, solid advice overall, but it was a bit too general, and it didn’t apply very well to the games industry.

Specifically, I’m going to concentrate on the case of someone without any previous industry development experience applying to game companies for the first time, possibly straight out of college. The type of job openings you’ll be looking for are usually referred to as junior programmer, entry-level programmer, associate programmer, or something similar. Game Development Wiki - GDWiki. Let's talk about jumping. This article conveniantly leaves out a few points when comparing games to bias one's opinion towards his point of view.

Examples: The original super mario brothers had a built in "run faster than should be possbile" button. Holding down the fire button makes you run. As soon as you figure this out it becomes ridiculous to not run constantly and thus you are holding down a button the ENTIRE GAME, when it would have simply made more sense to make mario run that speed constantly and use the fire button to slow down. In both mertroid and zelda games, the add on's had nothing to do with the puzzle and challenge as we (originally) didn't know what add-ons were in the game or what they did. Castlevania as Well as GnG had some of the WORST gameply mechanics in the history of video games. These aren't level design problems though, they are gameplay mechanic problems. A Video Game Development Blog. November 17th, 2008 Posted in Reviews, Featured | No Comments » A Digital Dreamer takes a close look at this gem of a PS3 game that every designer should take the time to play. 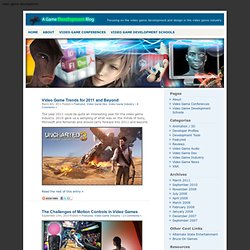 We had heard a lot of great things about LittleBigPlanet for the Playstation 3 months before it was released. We heard things like the way the characters were designed and showed emotions brought instant smiles on the faces of pretty much anyone who had a chance to play it. We had heard about great looking levels, multiplayer interaction, and creation aspects of the game. Little did we know… Little did we know… Getting down to the most basic elements of the game, LittleBigPlanet is essentially a 2D side scrolling adventure. Indiegames.com - showcasing the best in independent games. Indiegamer Developer Discussion Boards - Powered by vBulletin. So You Want to Be a Game Programmer?

Learning to Code: The Roadmap I Wish I Had Been Given - Jimmy Li.