Reactjs - Why isn't React considered MVC? Css - How to hide scrollbar in Firefox? , a user interface for JSON.

Material. References: Powerful content modeling for any use case. Google Spreadsheet as JSON API - Blog Rudy Lee. Data store is an important piece in most of the modern applications. 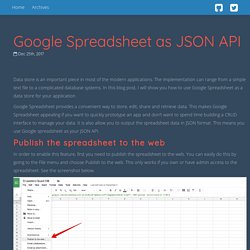 The implementation can range from a simple text file to a complicated database systems. Can I use... Support tables for HTML5, CSS3, etc. About "Can I use" provides up-to-date browser support tables for support of front-end web technologies on desktop and mobile web browsers. 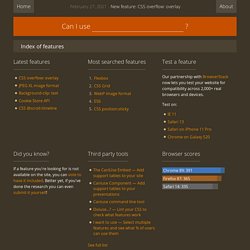 The site was built and is maintained by Alexis Deveria, with occasional updates provided by the web development community. The design used as of 2014 was largely created by Lennart Schoors. Convert PNG to ICO and ICNS icons online - iConvert Icons. How can I do a Cache Refresh in Google Chrome? - Super User. Vertical Timeline. The Best Firefox Add-ons for Developers: 30+ Tools for Programmers. Hey…remember Firefox? 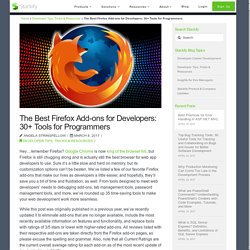 Google Chrome is now king of the browser hill, but Firefox is still chugging along and is actually still the best browser for web app developers to use. Sure it’s a little slow and hard on memory, but its customization options can’t be beaten. We’ve listed a few of our favorite Firefox add-ons that make our lives as developers a little easier, and hopefully, they’ll save you a bit of time and frustration, as well. Git Reference. Git reset is probably the most confusing command written by humans, but it can be very useful once you get the hang of it. 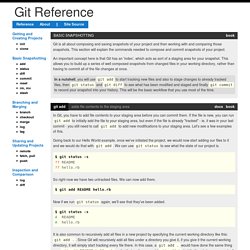 There are three specific invocations of it that are generally helpful. git reset HEAD unstage files from index and reset pointer to HEAD First, you can use it to unstage something that has been accidentally staged. Let's say that you have modified two files and want to record them into two different commits. You should stage and commit one, then stage and commit the other. Spacebars Secrets: Exploring Meteor Templates. The recent Meteor 0.8 update featured Blaze, a complete rewrite of Meteor’s UI system. 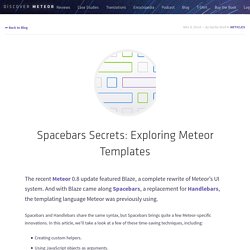 And with Blaze came along Spacebars, a replacement for Handlebars, the templating language Meteor was previously using. Spacebars and Handlebars share the same syntax, but Spacebars brings quite a few Meteor-specific innovations. In this article, we’ll take a look at a few of these time-saving techniques, including: Creating custom helpers. Using JavaScript objects as arguments. Let’s get started! Custom Helpers. Google Apps SMTP settings to send mail from a printer, scanner, or app - Google Apps Administrator Help. You can set up your on-premises multifunction printer, scanner, fax, or application to send email through Google Apps. 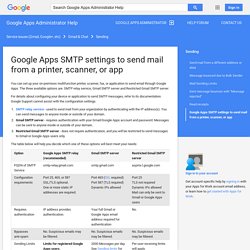 The three available options are: SMTP relay service, Gmail SMTP server and Restricted Gmail SMTP server. For details about configuring your device or application to send SMTP messages, refer to its documentation. Google Support cannot assist with the configuration settings. “Password incorrect” error - Accounts Help. Some examples of apps that do not support the latest security standards include: The Mail app on your iPhone or iPad with iOS 6 or below The Mail app on your Windows phone preceding the 8.1 release Some Mail apps (not built by Google) that come with your Android Phone Some Desktop mail clients like Microsoft Outlook and Mozilla Thunderbird To help keep your account secure, we may block these less secure apps from accessing your account. 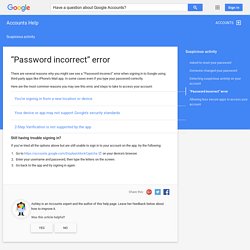 Apache Cordova. Meteor, Cordova, and Famo.us: The Chill Way to Build Apps. This is a guest post from Adam Elkassas, one of the co-founders of social mobile app Down to Chill. 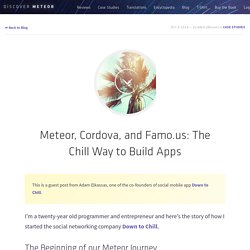 I’m a twenty-year old programmer and entrepreneur and here’s the story of how I started the social networking company Down to Chill. Axure and Font Awesome Library Widgets. You can get this By following these directions 1) Download the latest Font-Awesome list. 2) Install the Font-Awesome list to your machine fonts dir. 3) Open up Axure 7. 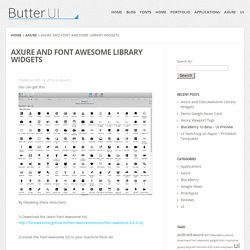 How to setup Google Apps for E-mail. Tutorial - How To Structure a Meteor Application. So far, all of the example applications in the previous tutorials have had the simplest possible file structures: a HTML file a JavaScript file a CSS file This has been fine for introducing basic concepts but it’s rare for real-world applications to be structured so simply. 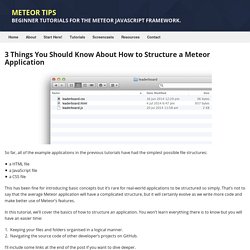 That’s not to say that the average Meteor application will have a complicated structure, but it will certainly evolve as we write more code and make better use of Meteor’s features. In this tutorial, we’ll cover the basics of how to structure an application. 10 Reasons why you should not even consider using Meteor. Untitled.

Hi, Hollie. Bootstrap. Three Battle Tested Ways to Install PostgreSQL. Having run over 100 students through my Ruby on Rails courses, I've come up with some straight forward ways to install PostgreSQL without too much pain. Here is how I do it: PostgreSQL is a relational database manager that keeps getting more and more popular within the web development community. It has taken over from MySQL as the preferred tool for production quality, scalable databases.

The rise in popularity is likely due to the backlash from Oracle purchasing and messing with MySQL, Heroku choosing Postgres as the preferred database in production, and Postgres' faster pace of development of new features like Arrays and HStore. How to Install Postgres on Mac OS X There are a lot of confusing options for installing PostgreSQL. Freddy's internet corner.

Mobile Development. HTML. PHP. Design Inspiration. CSS. Web Design General. Wordpress. Design Tools. Git - the simple guide - no deep shit! Git - the simple guide just a simple guide for getting started with git. no deep shit ;) by Roger Dudler credits to @tfnico, @fhd and Namics this guide in deutsch, español, français, indonesian, italiano, nederlands, polski, português, русский, türkçe, မြန်မာ, 日本語, 中文, 한국어 Vietnamese please report issues on github Infuse analytics everywhere with the AI-powered embedded analytics platform. Start your free trial.ads via Carbon setup Download git for OSX Download git for Windows Download git for Linux create a new repository. 50 Reasons not to use Photoshop for Webdesign. First things first, I love Photoshop. It is the world’s best program for image editing. I do not intend to say Photoshop is a bad program, I just wish to clear up the misunderstanding that Photoshop is the right tool to use for web and screen design.

Photoshop was designed to be used for image manipulation.