5 Typeface Challenges in Designing For Next-Gen Interfaces. Jason Pamental is the co-founder of h+w design and author of ‘Responsive Typography.’ 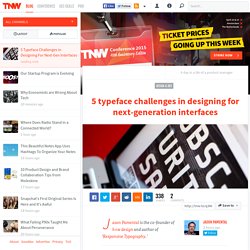 The explosion of new devices — phones, watches, health and fitness monitors and other wearable gadgets enabled by the Internet of Things — is yielding an increasingly interconnected set of user experiences. Even our cars have smarter, more integrated displays that tie into application and phone ecosystems. Until recently, many of these devices (if they existed at all) had rather basic interfaces – with even less sophistication when it came to typography. This was due in part to the relatively small physical size of the devices and resulting limitations in hardware and memory. Cost has also been a driver. There’s not only a huge demand for these design changes, but a tremendous opportunity if we can overcome some key limitations that have hamstrung efforts thus far.

Here are five typographic considerations designers should keep in mind when creating their next interface. 1. Why? 2. 3. 4. 5. 5 Typeface Challenges in Designing For Next-Gen Interfaces. 40 Free Resources Every Designer Should Know. Ever wondered where designers get their resources to help them succeed with a project? 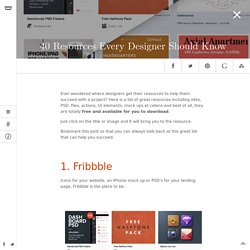 Here is a list of great resources including sites, PSD. files, actions, UI elements, mock ups et cetera and best of all, they are totally free and available for you to download. Just click on the title or image and it will bring you to the resource. Bookmark this post so that you can always look back at this great list that can help you succeed. Icons for your website, an iPhone mock up or PSD’s for your landing page, Fribbble is the place to be. Yoozon Hosts CMS Sites Using Dropbox, No FTP Required. If you’re building a website with WordPress or a similar CMS, you’ll find it relatively easy to use and update – but what about setting it up in the first place? 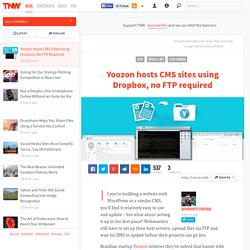 Webmasters still have to set up their host servers, upload files via FTP and wait for DNS to update before their projects can go live. Brazilian startup Yoozon believes they’ve solved that hassle with their new service, that lets you upload your site through Dropbox while it sets up your domain, DNS, email and databases instantly – allowing you to launch static HTML and PHP-based CMS sites in a flash. Le Wagon Is An Impressive French Coding Bootcamp For Entrepreneurs. Coding bootcamps are nothing new, but they have always been more popular in the U.S. than in Europe. 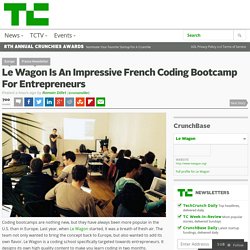 Last year, when Le Wagon started, it was a breath of fresh air. The team not only wanted to bring the concept back to Europe, but also wanted to add its own flavor. RelativeWave Gets Acquired By Google And Starts Giving Its $80 App Design Tool Away For Free. RelativeWave, creators of an $80 “interaction design and prototyping” Mac app called Form, has been acquired by Google. 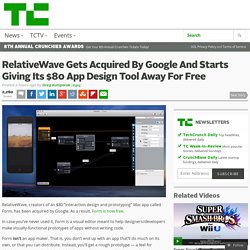 As a result, Form is now free. In case you’ve never used it, Form is a visual editor meant to help designers/developers make visually-functional prototypes of apps without writing code. Google Play Services for Android Updated with Better Maps. If you’re an Android developer that uses Google’s Play services, today is your lucky day as it hits version 6.5 with enhanced features for Maps, Drive, Wallet and Fit. 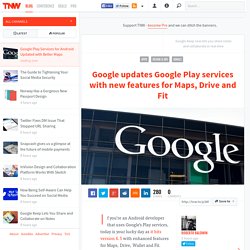 The update will be rolling out over the next couple of days with enhancements to Maps that includes a map toolbar that lets users get directions to a location without leaving your app. There’s also a new option for a “lite” map for when you need a tiny bitmap image of a location in your app. Amazon Launches Lambda, An Event-Driven Compute Service. Amazon Web Services announced a new service today called Lambda, a stateless event-driven compute service for dynamic applications that doesn’t require provisioning of any compute infrastructure. 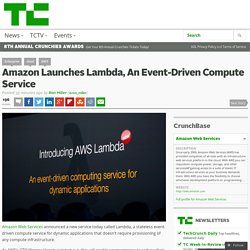 As AWS’s CTO Werner Vogels pointed out, this will enable programmers to reduce their overall development effort. You simply write the code and define the event triggers, and it will run for you automatically when the conditions are met. This automation should save time and money because instead of running the whole stack for something that may only run infrequently, you can now run it without any resources and it runs automatically. It’s worth noting that in a Hacker News discussion of the new service, one programmer who has had early access to the service indicated it does take some time to get up to speed on this service, but once you do, he can see the potential here for transforming the way programmers use AWS. Lambda will take care of managing, scaling and monitoring for you.

Codeanywhere Now Lets Users Collaborate on Code by Sharing a Link. Codeanywhere, the online multi-platform code editor, recently launched a new feature called Share Links, that allows users to collaborate with others on their projects in real-time by simply sharing a link to their work.

Share Links works even with non-Codeanywhere users, to allow them to view and edit code live by opening the link they’ve received. Google Brings Its Dart Programming Language To App Engine. Earlier this year at its I/O developer conference, Google quietly announced plans for supporting its Dart Programming language on App Engine. 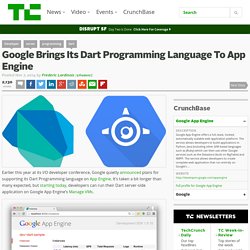 It’s taken a bit longer than many expected, but starting today, developers can run their Dart server-side application on Google App Engine’s Manage VMs. Dart is often seen as Google’s answer to JavaScript and, hence, mostly meant to run in the browser. But as Lars Bak and Kasper Lund, the inventors of Dart, told me back at I/O, the idea behind Dart was always to create a general purpose programming language.

Using Docker, developers were already able to deploy Dart on Google Compute Engine. App Engine, however, gives developers easier access to a wider range of features out of the box, including Google’s Data Store and caching services, as well as monitoring and logging tools. Adobe Launches Brackets V1.0, An Open-source Text Editor for Web Designers. Adobe has just released version 1.0 of Brackets, its free open-source text editor that’s built in HTML, CSS and JavaScript, for coding HTML, CSS and JavaScript. 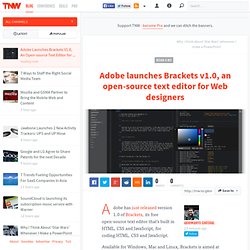 Available for Windows, Mac and Linux, Brackets is aimed at Web designers and developers, with focused features like Live Preview to easily jump between browser view and source code for quick edits, inline editors to work on specific bits of code without pop-ups or additional tabs, and preprocessor support baked in. Users can also download and use extensions to add functionality to aid their workflow, such as Git integration and JSHint support.

10 Things That Make an Addictive Mobile App. Gal Shvebish is the VP Products at MOBurst, a global mobile marketing agency helping first tier startups and brands grow their mobile business. Let’s be honest – we are all, to an extent, addicted to mobile device. The smartphone is one of those conveniences of modern life we’ve gotten accustomed to and quite dependent on – no different from indoor sewage or regular power supply. Facebook Will Pay Up If You Find Bugs in the Oculus Rift. Google Offers Free Udacity Course for Android Development. Google’s New Web Starter Kit Is A Boilerplate For Multi-Screen Web Development. For a long time now, Google has offered developers a set of what it believes are best practices for modern web development.

Today it is going beyond just providing this information by launching the Web Starter Kit, a boilerplate kit similar to HTML5 Boilerplate that includes templates and tooling for getting multi-screen web apps up and running quickly. Google says the templates are optimized for performance and responsive layouts to help developers quickly write multi-device web experiences. It essentially implements the recommendations Google has been giving developers already and packages them into actual code with the necessary tooling to get apps off the ground fast.

Web design ressources. Google Donates $100,000 to Help Kids Build Game Consoles. Google’s education arm has donated $100,000 towards a joint project between Code Club and Technology Will Save Us which allows children to build and programme their own games console for just £60, thereby teaching them early essential skills for a potential lifetime in technology. Announced today, the kits are already on sale but the funding from Google’s RISE program will allow 900 kids to get their hands on one, plus sessions with Code Club to assemble them, for free. It’s comprised of 40 parts which need to be soldered to its custom circuit board and once the Arduino-controlled gaming machine is complete, the children can start programming their own games to play on it. Naturally, it’s the soldering, programming and design part that Code Clubs will be assisting with, using resources created specifically for this project, the organization said.

GitHub Opens Octicons Icon Font to All. Building Code To Break Poverty In Bangladesh. Teaching people in the third world how to code seems to be a growing trend that may just help to break the world-wide poverty cycle. Danish-based microfinancing operation CodersTrust is starting to do just that with a test group of 100 Bangladeshis. “Nine out of 10 coders on sites like oDesk suck,” says CodersTrust co-founder Ferdinand Kjaerulff. It’s a problem he and cofounder, Skype angel investor, Morten Lund wanted to solve. They saw a big opportunity with coders in the third world and created their microfinance organization to give those below the poverty line a chance at better education, starting with Bangladesh.

Mashable. Google Acquires Divide in Bid to Make Android Enterprise-Friendly. Google has snapped up Divide, the team behind a mobile app that offers a secure means of separating personal and work-related data on company-owned devices. As Recode reports, the team was formerly called Enterproid and the terms of the deal were not disclosed. Divide confirmed the deal on its site. GoPro Files For $100M IPO With 2013 Revenue Of $985.7M, Up 87.4% From The Year Prior. This afternoon GoPro filed its S-1 document with the SEC, detailing its financial performance as it looks to go public. The company states that it will raise up to $100 million in the offering, trading on the NASDAQ under the ticker symbol ‘GPRO.’

The company’s revenue expansion has been impressive, with top line in 2011 of $234.23 million leading to 2012 top line of $526.01 million and finally, in 2013, revenue of $985.73 million. The company is GAAP profitable to boot, reporting $60.57 million in profit in 2013, up from a more modest $32.26 million in 2012. The company’s adjusted EBITDA — a very, very non-GAAP number — for 2013 totaled $133.72 million. How many cameras does the maker ship each year? Given that sunny set of facts, what’s the rub? Open Source Laptop Novena Crowdfunds Nearly 3 Times Its Target. For Aspiring Female Engineers, A Square Meal Of Code. Prototypo Will Let Anyone Design Original Fonts. 7 Tech Logos Before They Became Iconic. Codecademy Unveils Gorgeous Redesign of its 'Learn to Code' Site.